BRUSSELS — With tensions rising with Iran, the United States and Britain have been shopping for European support to bolster patrols in the Persian Gulf around the Strait of Hormuz, a vital passage way for global oil supplies.

But so far the American requests for help to escort shipping in the Gulf have been met with silence or rejection, including a blunt “no” on Wednesday from Germany. 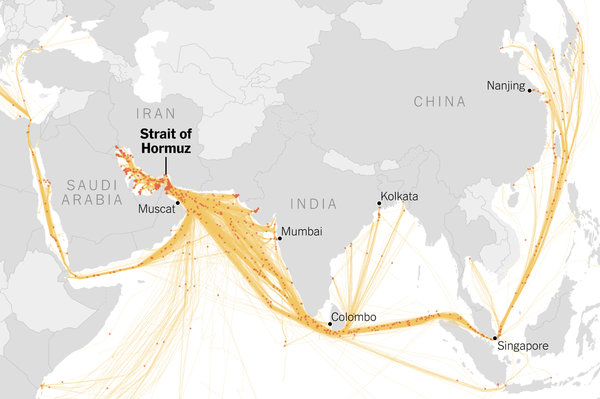 Twenty percent of the global oil supply flows past Iran through the Strait of Hormuz.

Nor have nations like France, Germany, Italy or Sweden yet responded favorably to Britain’s suggestion of a European escort force, separate from the Americans, even after Iran seized a British-flagged tanker in the gulf.

The refusals have underscored the divergent policies toward Iran and are aggravating distrust and resentment on both sides: Washington accuses its European allies of free-riding on its efforts to secure the Persian Gulf, while the Europeans argue that Washington created the problem in the first place by trying to kill off Iran’s oil exports.

Many European leaders have worked to keep their distance from President Trump and his policy of “maximum pressure” on Iran to avoid being seen as aiding that policy. Nor do they see the logic of imposing sanctions on the Iranian foreign minister, who presumably would be Iran’s representative in any new negotiations — though Washington has done so.

On Wednesday, senior American officials described the foreign minister, Mohammad Javad Zarif — who defends his government’s policies as zealously as does his American counterpart, Secretary of State Mike Pompeo — as being a “propaganda arm” of Tehran.

The Europeans are unlikely to move unless Iran takes more provocative action. European nations with navies understand that shipping traffic through the Strait of Hormuz is a strategic interest, but they are reluctant to join the United States in patrolling the waterway, wary of being drawn into someone else’s war.

“In ordinary times there would have been a positive response,” said Robert Malley, the director of the International Crisis Group and a former member of the National Security Council under President Barack Obama. “But now there is a fear of being seen as too closely associated with the United States.’’

The Europeans support the 2015 deal that was intended to prevent Iran from obtaining a nuclear weapon, and have been working to salvage it since Mr. Trump abandoned the agreement last year. Tensions have escalated as Tehran presses for relief from new American sanctions.

‘‘Whatever efforts Europeans make, even if parallel efforts, in Iranian minds it will look like two pieces of one move,’’ he said. ‘‘So it’s hard to disentangle themselves from a U.S. policy they see as having provoked this crisis”

That much was clear late Wednesday, when the German foreign minister, Heiko Maas, a Social Democratic member of the shaky governing coalition, said that his country would not be joining the Americans.

The Social Democrats, junior members of the coalition led by Chancellor Angela Merkel, have been particularly critical of American policy toward Iran. That includes Mr. Trump’s withdrawal from the 2015 nuclear deal as well as his efforts to force new concessions from Iran by trying to cut off its oil exports.

“Germany will not take part in the naval mission proposed and planned by the United States,” Mr. Maas said. “We are in close coordination with our French partners. We consider the ‘maximum pressure’ strategy to be wrong. We do not want a further military escalation, we will continue to focus on diplomacy.”

Germany’s refusal was criticized by the American ambassador to Germany, Richard Grenell, who is known for being blunt and undiplomatic. Mr. Grenell said that as a leading international economic power, Germany should want to secure one of the world’s most important shipping corridors.

“With global success comes responsibility,” Mr. Grenell told the regional daily Augsburger Allgemeine. He added: “America has given a lot to help Germany remain part of the West.”

Some in Germany share that view, and it was indicative of the strains in the governing coalition that Defense Minister Annegret Kramp-Karrenbauer, a Christian Democrat viewed as a likely successor to Ms. Merkel, had said earlier on Wednesday that the American request was being “reviewed.”

Jan Techau, an analyst with the German Marshall Fund, called the German decision and the shallow debate behind it a case of ducking responsibility.

“First, for us it’s the classic reluctance to get involved militarily,’’ Mr. Techau said. ‘‘But then there’s the argument that the Americans caused this and destroyed the Iran deal and we’re not going to go out there to alleviate the problems they created.”

Also troubling, he said, was the silence on the British request for a European convoy. “On the one hand we say with Trump that it’s a European moment and we must take our own fate in our hands,” Mr. Techau said. “Yet now when there is a clear issue of interests there is nothing.”

Volker Perthes, director of the German Institute for International and Security Affairs in Berlin, said he agreed with the German decision.

“We cannot be part — should not be part — of a U.S. mission that couldn’t be seen other than being an escalatory move,” he added.

France has been cautious for similar reasons.

“All our actions only have one aim: to de-escalate and to lower tensions,” said an adviser to the French defense minister. “We won’t do anything that doesn’t go in that direction. A coalition that would look like it was directed against Iran would not be likely to reduce tensions.”

A senior French official was blunt: “We have intense military cooperation with the Americans. But on Iran, we won’t follow automatically.”

Jean-Yves Le Drian, the French foreign minister, told lawmakers last week that France was working with Britain and Germany on a “mission for monitoring and observing maritime security in the gulf” — something less kinetic than naval escorts.

“This vision is at the opposite of the American initiative, which is the choice of maximum pressure to make Iran go back on a certain number of its objectives,” Mr. Le Drian said.

Iran has been trying to signal its unhappiness with the lack of European economic benefits promised under the nuclear deal.

The same goes for its frustration with the largely successful American effort to cut off its oil exports.

Mr. Malley of the International Crisis Group said Iran might now be exporting only 100,000 barrels of oil a day. “That’s very hard for Iran to continue living with, and it will react in ways that could provoke the war President Trump doesn’t want,” he said.

Iran announced small breaches in its compliance with the nuclear deal and seized the British-flagged tanker, arguing that Britain had seized an Iranian tanker near Gibraltar in violation of the nuclear deal.

Tehran is also trying to separate the Europeans from the United States.

But if Iran were to seize more tankers, Mr. Malley said, the Europeans might join a naval escort group, whether it aids the Americans or not.

“Further military buildup in the region would increase the risk of miscalculation,” said Ali Vaez, Iran project director of the Crisis Group.

“The reality is that there is no military solution,’’ Mr. Vaez said. ‘‘Having escorts for the ships would address the symptom of this crisis, not the root causes.”

Brexit BOMBSHELL: Food and medicine supplies could be AIRLIFTED to UK after no deal exit