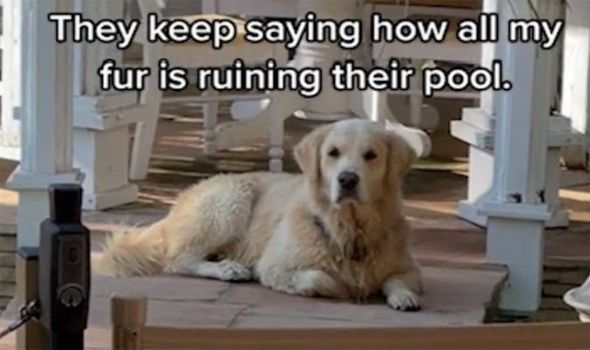 Jake was less than pleased at having to vacate the water, a fact he made sure his owners were aware of in this amusing clip.

The hilarious video, which was uploaded by TikTok user @courtbrooke_22, was a huge hit on the app, with over 1.6 million views and almost 180,000 likes.

As the clip begins, viewers can see Jake laying down on the patio next to his family swimming pool, his fur clearly wet and his face looking sullen.

The dog has thrown a strop after discovering playtime in the water is over, as the captions explain that he thinks he’s had his last ever swim at home and will be shipped off to a new family.

However this isn’t quite the case, as Jake’s owner tells him to stop being dramatic and that they simply told him to get out and dry off so that he can go to the dog park.

Viewers were amused by the video, with one user commenting: “Jake stop with the dramatics, I was over here getting mad.”

Another commenter wrote: “Okay I was starting to feel sorry for Jake. But he has earned an Oscar for that dramatic scene.”

A third added: “Jake made my day I was not expecting that.”

Jake isn’t the only golden retriever to have enjoyed viral success on the video sharing platform of late, with the breed proving extremely popular with users of the app and racking up over 14 billion views.

Hank, another golden retriever, has been receiving a lot of attention since a clip of him being the dog of honour at a wedding was uploaded.

The adorable pup went dressed to impress in a bowtie, sunglasses and waistcoat and even had his own signature drink at the bar.

His owners made sure Hank wasn’t feeling too left out by giving him a cocktail glass filled with water, which the enthusiastic dog quickly got stuck into.

Another golden retriever who has recently enjoyed TikTok success was Mango, whose adorable puppy dog eyes earned her plenty of fans.

The cute video showed her reaction to being put on a diet by her vet, giving her owner a desperate look after not receiving much food in her bowl.

Golden retrievers are described as ‘kind, friendly and confident’ by The Kennel Club, and are well known for being intelligent and affectionate family dogs.