Home » Europe » 'We are not machines and Boris is exploiting us,' says exhausted nurse 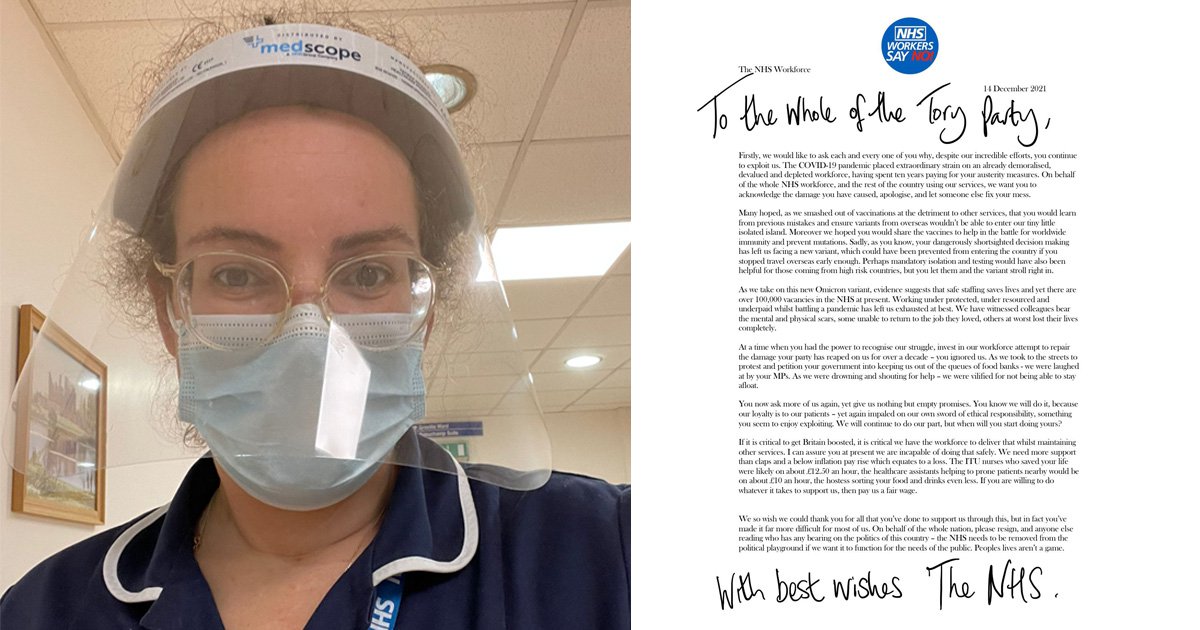 NHS staff have accused Boris Johnson of exploiting them after he wrote a letter begging for their help to reach his booster target.

The prime minister wants to offer all adults in England a third dose of a Covid vaccine by the end of the year to beat a ‘tidal wave’ of Omicron infections.

In an open letter to NHS staff he said: ‘I need your help to deliver the fastest, biggest vaccination drive this country has ever seen.

‘I know this will not be easy. I know that you are tired and weary.

‘For our part, I can assure you that this Government will do whatever it takes to give you the support you need.’

But nurse Kirsty Brewerton questioned how he had ‘the gall’ to make such a statement amid a pay rise row and a staffing crisis.

In a stinging letter addressed to the Tory party, she accused him of exploiting the goodwill of NHS staff by asking for ‘more and more’ in return for ‘nothing but empty promises’.

‘If it is critical to get Britain boosted, it is critical we have the workforce to deliver that whilst maintaining other services. I can assure you at present we are incapable of doing that safely,’ she wrote.

‘We need more support than claps and a below inflation pay rise which equates to a loss.

‘If you are willing to do whatever it takes to support us, then pay us a fair wage.’

Kirsty wrote the letter on behalf of campaign group NHS Say No, which has been warning for months about a mass exodus of staff due to poor pay and conditions.

They are calling for a 15% pay rise to make up for a decade of real-term cuts – far short of the controversial 3% that was offered this summer.

‘Nurses are queuing at food banks and people are leaving because they can’t afford to do this job. That is a fact.

‘NHS workers who are leaving, 90% of the time it is down to money and because people don’t feel valued.

‘It is not rocket science that if you pay people fairly, they will work for you.’

The Government say a record number of doctors and nurses are working for the NHS.

But campaigners say the retention rate is also at a record-high and the workforce is not growing fast enough to meet unprecedented demand.

Nearly 14,000 professionals left the UK’s nursing and midwifery register between April and September 2021.

There are 40,000 unfilled nursing vaccines across the NHS, and 100,000 vacancies across all healthcare.

Kirsty, 34, said it will be impossible to deliver the booster target while safely maintaining current services, which are already stretched to the limit.

The Omicrom wave comes on top of usual winter pressures and a record backlog of patient care with over 5 million people thought to be awaiting treatment.

Medical professionals from across the NHS have warned it is ‘inevitable’ that the jab roll-out will lead to further delays and cancellations of non-urgent operations, as staff and resources are diverted to administering the vaccines.

Kirsty said the NHS will rise to the challenge but warned ‘we are not machines’.

‘That’s the problem for people in the NHS, they feel that guilt and responsibility because who else can do it? No one can.

‘But we are not machines. There is a finite amount of us.

‘The reality of what people are facing now is that people are dying because we haven’t got enough staff, and nothing is being done about it.

‘We are just expected to keep going and keep doing more. It’s dangerous.’

Experts still don’t know what impact Omicron will have on hospitals, but say it’s possible admissions could exceed the record of 4,583 set in the second wave in January.

Kirsty believes ‘we are in a worse position now than 2020’ because staff are leaving and ‘those we have got are demoralised and exhausted’.

Research published in October found nearly three-quarters of NHS workers have considered leaving over the past 12 months due to concerns about their health and wellbeing.

But Kirsty, an experienced senior nurse, said colleagues were stretched to breaking point long before the pandemic.

The mum-of-one has worked for the NHS for 10 years and said she has personally suffered from austerity policies.

In 2019 she had a ‘mental breakdown’ and took time off work as an A&E nurse due to the pressures of the job.

‘I was so depressed I couldn’t work. I almost had PTSD and that was purely because I was being put in situations where my work load was impossible,’ she said.

‘I’d be in resus on my own with three patients who were critically unwell, but there should have been three nurses in there, or I’d be in corridors with god knows how many people waiting to go on the ward.

After taking some time to recover, Kirsty returned to work in the first wave of the pandemic as a Sister to find ‘her colleagues wearing bin bags and asking local schools to make visas because we had nothing’.

She decided to start campaigning to improve conditions but says cries for help are falling on deaf ears.

‘I spent the whole of 2020 and this year campaigning for fair pay, proper PPE, and decent working conditions. No one is listening,’ she said.

Kirsty urged ministers to take the NHS ‘out of the political playground’ and come up with a real action plan to address the retention and recruitment crisis.

A key pledge in the Conservative’s 2019 manifesto was to recruit 50,000 more nurses – but nearly half of that figure included staff the government planned to retain.

There is currently no independent analysis on how many medics are being trained in the pipeline to meet estimated future demand.

Last month, MPs launched an inquiry into ‘how to end the staff drain’.

But hours earlier, they rejected an amendment put forward by ex health-minister Jeremy Hunt, which would have boosted transparency by requiring the Government to publish independent workforce projections twice a year to ensure the number of clinical staff in training meets future demand.

Kirsty said: ‘Whenever there is going to be an election or anything else, all they talk about is what they are going to do for the NHS.  Where are these 40 hospitals they promised and the thousands of nurses? Its empty promises all the time.

‘It isn’t a game. I would love [ministers] to do a months worth of work on the ward and have a look at what effect they’re polices are having on people, they seem to have absolutely no clue.

‘They are putting the skills up and up, the workload is going up and up, the problems people are coming in with are worse and worse and what we have to do for them is more and more, yet the pay has technically gone down.’

A government spokesperson said: ‘We recognise the enormous pressure this pandemic has put on all NHS staff and the prime minister has thanked them for all their hard work.

‘We are doing all we can to support our health and care staff – including their mental health and wellbeing – and the NHS continues to offer dedicated services for the workforce such as helplines and wellbeing hubs.

‘NHS staff have rightly received a 3% pay rise this year and we have provided record investment for the health service. We are committed to reducing vacancy numbers and growing the workforce, with 50,000 more nurses by the end of this Parliament.’