Home » Europe » ‘We Did It’: Franky Zapata Crosses English Channel on Hoverboard on 2nd Try

PARIS — Franky Zapata, the hoverboarding Frenchman who wowed Bastille Day crowds last month with a jet-powered hoverboard, successfully crossed the English Channel on his second attempt Sunday on the device he invented.

An attempt 10 days ago failed after Mr. Zapata fell into the water midway through the crossing when he tried to land on a boat-mounted platform to refuel. On Sunday, the midway refueling — Mr. Zapata’s machine runs on kerosene — went smoothly.

Gliding above the water on what he calls a Flyboard Air, Mr. Zapata took about 22 minutes to cover the roughly 20 miles that separate Sangatte, in northern France, from St. Margaret’s Bay, just east of Dover, in southern England.

“At one point, we thought to ourselves, ‘We are crazy,’ it won’t work,” a visibly elated Mr. Zapata told reporters after landing. “And when it does work, it’s just a magical moment.”

“I could see England getting closer, and I tried to enjoy it to avoid thinking about the pain,” Mr. Zapata added, noting that his legs had started to hurt from the flight.

Asked if he thought he had accomplished a historical feat, Mr. Zapata said it was not up to him to decide. “But what’s important is what remains in our hearts,” he said. “We did it.”

Mr. Zapata’s first attempt to cross the English Channel had been intended to commemorate the 110th anniversary of the first flight between continental Europe and Britain, made by the French pilot Louis Blériot.

“What I have done is a lot smaller, but I followed my dream, and that’s huge,” Mr. Zapata told the BFM TV channel. 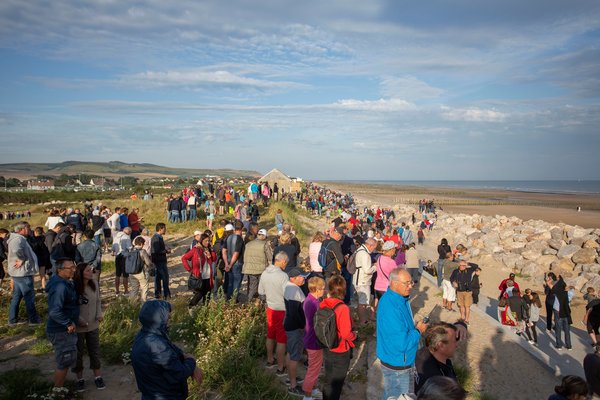 On Sunday morning, hundreds once again gathered on the French coast to clap and cheer Mr. Zapata as he took off and sped over the beach toward Britain.

His device, a gas turbine-powered contraption fueled by five small jets, can theoretically fly up to 110 miles per hour at an altitude of 50 feet to 65 feet for about 10 minutes.

Mr. Zapata, who is originally from the southern French port city of Marseille, presented a water-propelled version of his device in 2012. A later version was fitted with small jet engines, but the French aviation authorities were initially wary of letting him fly it, even issuing a brief ban. (On Sunday, France’s civil aviation authority congratulated Mr. Zappa on Twitter).

But the French Army’s interest in Mr. Zapata’s device shifted his fortunes.

Last year, the French Defense Ministry pledged nearly $1.5 million to his company, Zapata Industries, to develop the device, which was featured at a military-sponsored convention. The French civil aviation authority also gave him a license to test the hoverboard at a private airfield in southern France.

It was the Bastille Day show last month, however, that caught global attention. Mr. Zapata, holding a rifle, glided above the Champs-Élysées on July 14, France’s national day, as troops stood below and President Emmanuel Macron looked on, apparently impressed.

The performance secured intense coverage of Mr. Zapata’s attempts to cross the English Channel, and the failure of his first attempt left him uninjured but disappointed.

Mr. Zapata and his team had to work “15 to 16 hours per day for eight days to rebuild a complete machine,” he told BFM TV, because the water had damaged the engine and circuitry.

Mr. Zapata, who cried on a brief phone call with family members after his landing, said he expected to celebrate his achievement with a small groups of friends and family at a good restaurant.

His next project? Maybe finish that flying car.

Corbyn QUITS: Labour leader to step down but REFUSES to blame party’s mandate after defeat