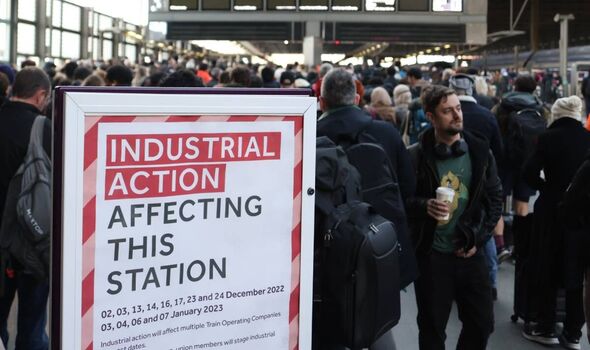 TUC leader Paul Nowak again left the door open for coordinated action and RMT chief Mick Lynch said talks are not “going in the way we want”. Both claimed they do not want the situation to continue into the summer and called on ministers to meet for talks.

Mr Lynch said: “We need a bit of give from the Government. We need them to empathise with normal people.

“Pay in retail was far too low. These big stores make vast profits and keep their members’ conditions and wages screwed down, so they need a better deal as well.

“I am sure we can create some goodwill next week and get negotiations moving forward.

“We want to say to the public, ‘We are not hostile to you.’ We don’t want to hold you to ransom as the caricature is. We just want a square deal so we can get back to work and we can get the country moving again as well.”

The RMT boss compared the Government’s proposed crackdown on strikes to practices in China and Russia. Rishi Sunak wants to enforce minimum service levels in the public sector and raise the threshold for strike action.

Mr Lynch said: “You’re talking about the conscription of labour even during a lawful dispute and I would have to name my members that went to work to break our own picket lines. That’s unacceptable in a free society.

“We’re always being told that repressive regimes do things against the public.”

But Work and Pensions Secretary Mel Stride said: “We do have to question whether we’ve got the balance right between the rights of workers to strike and the inconvenience and sometimes danger that can pose to the public.

“So I think it’s quite right that the Government has come forward and already introduced some legislation, and we will come forward with further details.”

Around half of railway lines yesterday were closed and only a fifth of services running as tens of thousands of RMT members walked out on the second day of their strike, with another to begin on Friday.

Mr Nowak has urged ministers to open pay talks with unions. In a letter to Mr Sunak, he said public services were in crisis after years of “underfunding and understaffing”.

He wrote: “We can’t solve these problems without a fair deal for the people on the frontline.

“Every month experienced employees are quitting, with one in three public service staff now taking steps to leave their professions or actively considering it. This is simply unsustainable.”

Police dog stabbed in the head with knife returns to duty