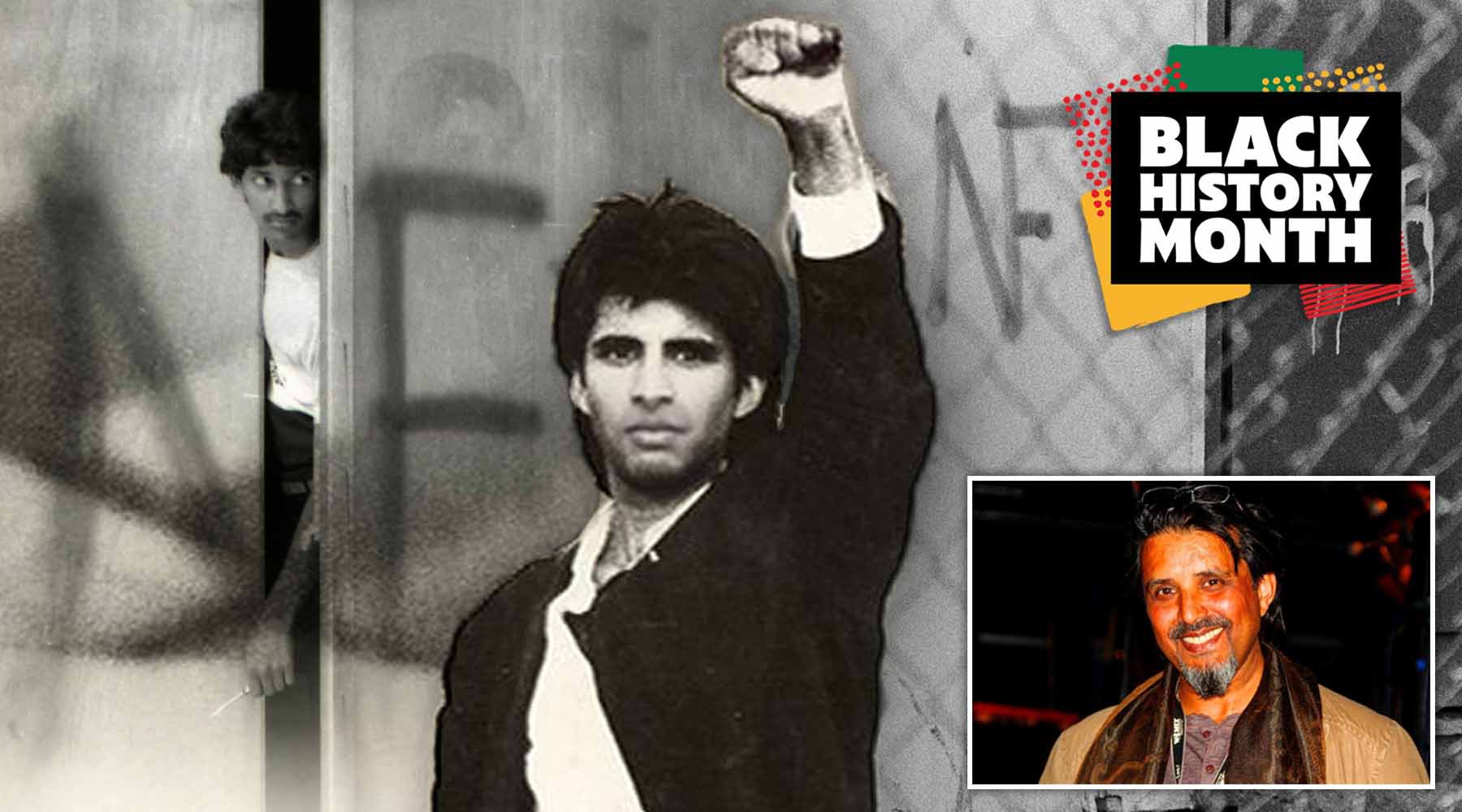 Mukhtar Dar was carrying books about Van Gogh and Picasso on the day a gang of racist skinheads pulled up in a van outside his college.

Wielding baseball bats and iron bars, the neo-Nazis were about to give him a harsh reality check on his attempt to fit into mainstream British society.

Aged 21, the fine arts student would spend the following years confronting the racist scourge that presented itself outside his college in Sheffield.

‘I was coming out of the art college with books about Van Gogh and Picasso that I’d checked out of the library,’ he tells Metro.co.uk. ‘I wanted to integrate and be invisible, but then a van pulled up and the door opened and they shouted “Paki” at me.

‘At first I thought there were only two or three of them at the front, but the whole van was full of racist thugs with iron bars and baseball bats.

‘They opened up the door and I stuck my fingers up at them. They chased me, and I used to be a long-distance runner, so I ran all the way home.

‘When I got home I looked at my mum and I looked at the Van Gogh and Picasso books and I realised I’d been trying to assimilate into a society that hadn’t accepted me. I put the books to one side and put a picture of the Bradford 12 up on my wall.

‘That was my political awakening.’

Against the backdrop of the severe recession in the early 80s, the young activist joined a movement of self-mobilisation against the racists who were targeting Asian and African Caribbean communities on the streets and in homes, workplaces and places of worship.

He was arrested at demonstrations and beaten up by skinheads but continued his struggle for two decades, joining a wider anti-racism movement across the UK.

Along the way, he documented the ‘Blacklash’ against the hate and discrimination that manifested itself in swastika symbols, petrol bombs and racist violence.

Mukhtar, who is using some of the images from his vast archive for an exhibition forming part of Birmingham’s Black History Month, draws parallels between his fight and the present day.

The photographs, which go back almost 40 years, are being displayed for the first time just as the country experiences some of the root causes that fed the social unrest in the early 80s.

‘We were in the midst of a deep recession, similar to what’s beginning to happen now,’ Mukhtar says.

‘All the ills that befell society, the poor housing, unemployment, they were conveniently blamed on the Asian and Afro-Caribbean communities by politicians of all shades and guises and that legitimatised and fuelled street violence. Out of the gutter came organisations like the National Front, British Movement and Combat 18. They began to organise weekly demonstrations in the heart of our communities and swastikas and National Front slogans began to appear on our streets.

‘Alongside all this there were racist attacks and petrol bomb attacks on our homes and places of worship and high-profile racist murders on the streets also took place.’

Mukhtar, now 60, became a founding member of the then Sheffield Asian Youth Movement in response to the hate being meted out by far-right groups, taking part in active resistance on the streets and staying with families who were being targeted by the neo-Nazis.

The final catalyst for the group’s formation was a restaurant being attacked by 16 racist thugs, which he says resulted in the police arresting the owner and waiters rather than going after the perpetrators.

One of the pictures in his exhibition shows a member of the Bradford 12, who were convicted for making petrol bombs in anticipation of a far-right attack that never happened.

The skinheads were expected to descend a little over a week after Parveen Khan and her three children were killed after petrol was poured through the letterbox of their home in east London.

The Bradford 12 were acquitted by a jury in April 1982 in a landmark ruling on the right to self-defence.

With frustration rife at police inactivity, Mukhtar captured the fightback in pictures as he joined the anti-racism movement in other towns and cities.

‘There was a tidal wave of pernicious and vicious racism spread across the country,’ he recalls.

‘It really fell upon the second generation youth to organise and defend themselves and their communities. Up and down the country where there were significant south Asian populations, from Sheffield, Dewsbury, Bradford to Coventry, Leicester, Birmingham and Southall, a defensive organisation called the Asian Youth Movement came into being.

‘The movement defended the community from organised far-right racist attacks at a time when the police were indifferent to the attacks.

‘It was the same across the country, on one side you had the fascists and on the other you had the police, who were supposedly there to protect us, arresting the victims of violence. So it led to us having to organise to defend our communities.’

While the British National Party, the National Front and other groups splintered or faded into near-obscurity, the current age has its own far-right threat.

Members of neo-Nazi group National Action, which is proscribed under the Terrorism Act, have been brought before the courts for plotting atrocities based on their race war ideology.

On the streets, the far-right is active through the likes of Tommy Robinson, while groups such as Britain First remain ever-present. In digital times, there is a growing online threat from far-right groups across Europe, experts have previously told Metro.uk.

Mukhtar, who is now a visual artist and creative producer, draws a thread between the age of the National Front and the present day, when the spectre of such groups remains.

‘These far-right organisations always come about when there’s a major crisis, such as recession.’ he says.

‘Populism seeks to divert attention from the real causes of unemployment and housing and the cost of living crisis to minority groups, who are used as scapegoats. There’s a connection to the past and what’s happening now, and the exhibition says we need to build alliances.

‘Back in the day we supported the miners and when the Yorkshire Ripper was loose on the street women were organising street marches, called Reclaim the Streets. That really echoed our own experiences as Asians because of the attacks and fear on our streets.

‘We found empathy and empowerment with other movements.

‘It’s ok to talk about people climbing the social ladder but it’s the working classes, black and white, who remain the scapegoats and so we need to find common cause against racism.’

Mukhtar, who is of Pakistani background, didn’t let the mob prevent him from completing his fine art course.

He moved to Birmingham three decades ago and has played a role in the city’s emergence as a flagbearer for diversity, including through directing the annual Simmer Down Festival in Handsworth.

The father-of-two wants the exhibition to serve as a reminder of the importance of uniting against racism in times when people are again struggling to make ends meet.

‘The key thing about the exhibition is that racism is used to divide people,’ he says.

‘And in times like this, with the cost of living crisis and as the recession gets deeper, we need to unite and we need to find common cause. That means across religion, ethnicity, class, gender and so on.

‘An injury to one is an injury to all. The response to racism should cross all divides.’

The display, entitled Blacklash: Racism and the Struggle for Self-Defence, is running under the Black History Month programme at the city’s Museum and Art Gallery.

Videos and political ephemera also form part of the installation, which has been created by the Kalaboration Arts group in partnership with Birmingham Museums Trust.

Mukhtar’s throwback forms part of a wider reception and rally at the venue, entitled Moments to Movements, which will include a reunion of activists from the 80s.

Speaking ahead of the event on Saturday, he told Metro.co.uk that he also wants his archives to open a wider window on British society that cuts across racial lines.

‘Anti-racism in the past was formed on anti-colonialism and anti-imperialism,’ he says.

‘As young people, we were actually trying to understand why the hell we were here and it led us to understand that we are here because you were there.

‘From that moment when the Europeans set foot in our yard, our histories became connected.

Blacklash: Racism and the Struggle for Self-Defence runs at Birmingham Museum and Art Gallery until October 30. For more information and visiting times, click here