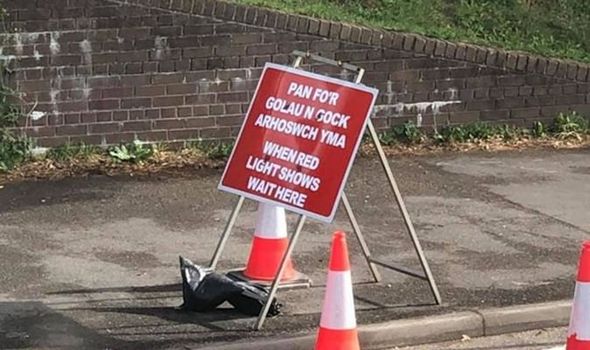 An unlucky language blunder has left motorists sniggering at a road sign in Momnouthshire, South Wales. The Welsh on the sign reads: “Pan fo’r golau n gock, arhoswch yma”, and the English below says: “When red light shows wait here.”

The “embarrassing” error came after road users pointed out there is no letter ‘K’ in the Welsh alphabet.

Then, to make matters worse, an unfortunately placed screw on the ‘g’ meant that ‘gock’ looked as if it said ‘c***’ – making the translation read: “When the light is c*** wait here.”

Welsh speaker Bethan Morris told WalesOnline: “It is funny, but it does make my blood boil that the authorities can’t get it right. It is a government requirement that they get these bilingual signs up and yet they are still getting it wrong.

“If they can’t get it right, then what chance have we got?”

Fiona Williams, who also lives in the area, said: “There isn’t even a letter K in the alphabet, which makes me think it might be deliberate.

“You would only need Google Translate!”

Since being shared on social media, the sign has sparked a fierce debate, with some people suggesting Welsh should be removed, and others believe it should be below English.

The woman who posted the image of the sign, who wishes to remain anonymous, said: “We cannot let the language die as it is our heritage, it is the fastest-growing language in the UK according to Duolingo stats, and it’s who we are. The fact that it cannot be represented or translated accurately is very annoying, to say the least.

“Everyone expects everything to be in English here and they take offence when it is not. But we are not England we are Wales, we make our signs bilingual to help others just as other countries like France do. At the least, the companies who produce signs should make sure the spellings and grammar are accurate.”

A spokesman for Monmouthshire County Council said: “We have looked into this, and the offending sign belongs to a contractor who is carrying out work on behalf of the council.

“The council has already been in touch with the contractor who has promised to rectify the error as soon as possible.

“Looking at the picture the offending word on the sign is ‘gock’, not ‘c***’. The Welsh text should read ‘pan f’or golau yn goch arhoswch yma’. It seems the word for red – coch – has been correctly mutated to goch but the final letter H has been mistaken for a K.”

Toddler critical after falling several storeys from block of flats