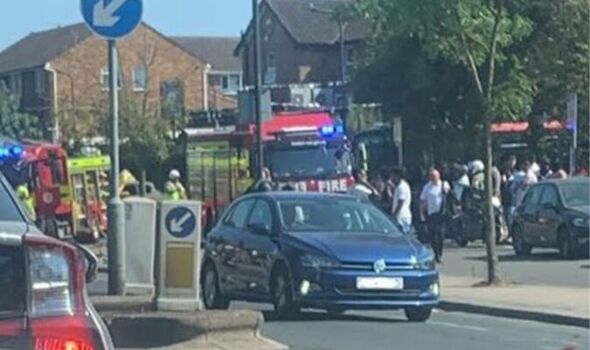 The fatal collision, which involved a car and a bus, happened on Harrow Road near Wembley police station. Fans travelling to Wembley Stadium to see Coldplay have been advised to use alternative routes.

Emergency services rushed to the scene just after 3pm

A blue car collided with the 92 bus which was heading in the direction of Ealing Hospital.

A spokesperson for the Metropolitan Police said: “Officers were called at 3pm on Saturday, August 13 to a collision between a car and a bus, at Harrow Road near Chaplin Road, Wembley.

“A man aged in his 70s was treated by paramedics. Despite their efforts he was pronounced dead at the scene. Next of kin have been informed. A number of people on the bus were treated for minor injuries. No arrests have been made.”

The victim was treated by paramedics but sadly died at the scene.

He has not yet been named by the authorities but he is believed to be in his 70s.

His family has been informed of the tragedy.

Several people on the bus were treated for minor injuries.

Pictures show several fire engines at the scene helping clear the debris from the street.

Wembley Stadium issued a warning to fans travelling to the Coldplay show to take alternative routes.

On Twitter, the stadium’s account wrote: “Driving to Wembley? There has been a road traffic accident at the junction between A404 Harrow Road (all approaches) and Chaplin Road (both directions). This closure will likely be in place for some time”.

Just before 8pm, traffic data company Inrix is reporting that the A404 Harrow Road remains closed in both directions.

Investigation work between Wembley Police Station and A4005 Bridgewater Road are ongoing.

Police are appealing for any witnesses or dash cam footage to help with their investigations.

Meghan ‘humiliated’ the Archbishop! Harry attacked for ‘endorsing what she was saying’