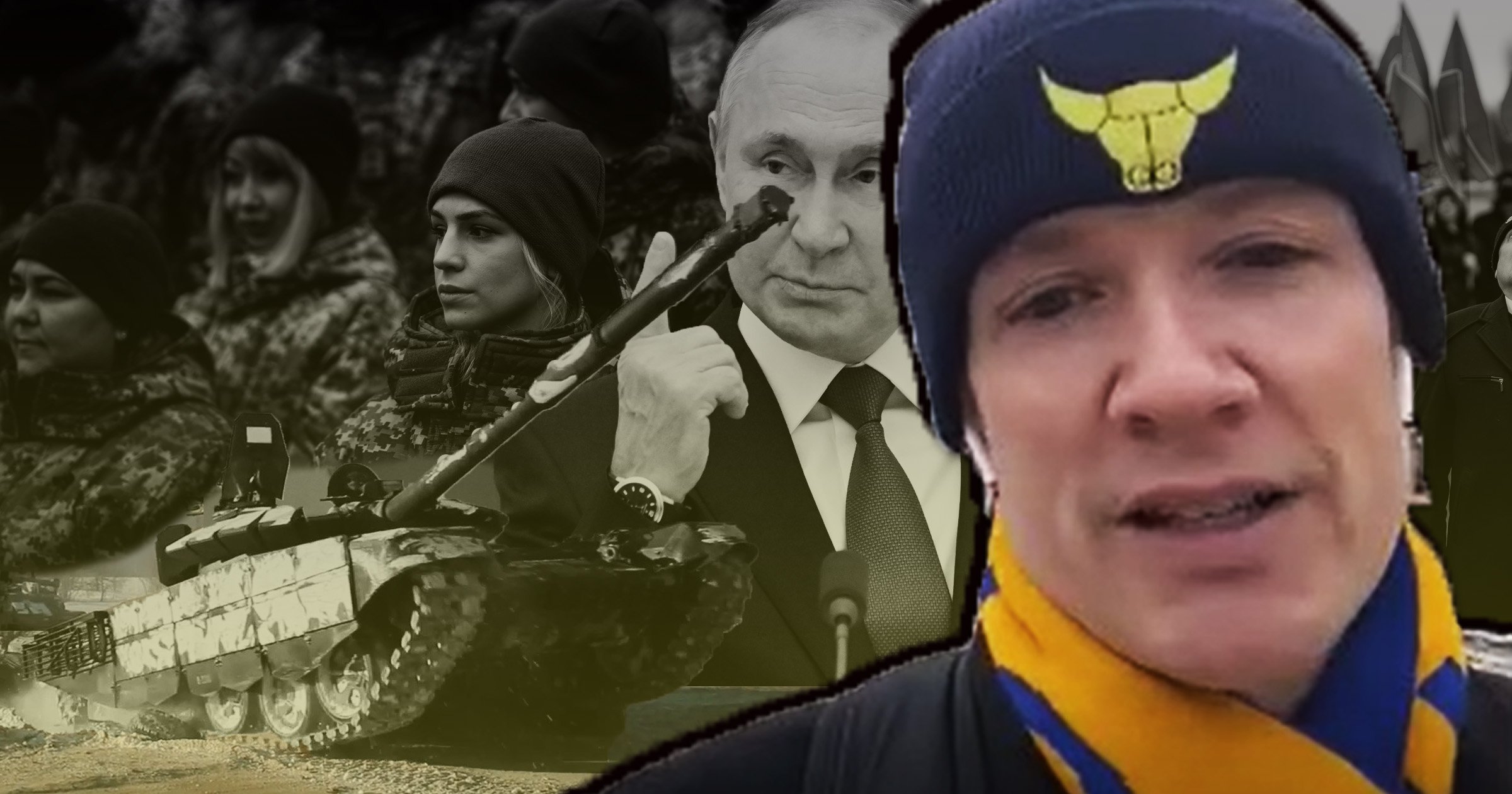 A British ex-pat who has remained in Ukraine to be with his wife has described a ‘rollercoaster’ of emotions amid the threat of invasion.

Wes Gleeson spoke to Metro.co.uk from Sofiyivska Square in Kyiv this morning as calm prevailed in the city on the day that the US said the Russian Federation’s massed forces could roll over the borders.

Mr Gleeson said his dad is among people in the UK who have ‘inundated’ him with messages of concern and he is ‘glued to my phone’ for news.

Despite the fatherly advice that it is a case of ‘when, not if’ Vladimir Putin launches an attack, he does not want to leave his Ukrainian wife.

Mr Gleeson, 43, sported Ukrainian colours to join the country’s day of unity, which included the national anthem being played outside public buildings at 10am, but found himself almost alone in the central square.

As a precaution, he has evacuated his flat en-route to the city centre and moved in with his in-laws at their home on the outskirts of the capital.

‘The president said the other day people should be getting their Ukrainian flags out but it’s like I’m the one who’s turned out to the fancy dress party and I’m the only one that’s dressed up.

‘It seems like it’s more or less business as usual. Right now I’m staying on the outskirts so I’ve come in for a bit and it seems perfectly normal.

‘It’s a scary situation and it’s not like people are completely ignoring what’s happening, people know there’s missile silos and field hospitals set up less than 100 miles away.’

The software entrepreneur, who has been in Ukraine for 12 years, told Metro.co.uk that he is more worried about the economic fallout of the crisis rather than his own personal safety, and a financial crash might force him to leave the country.

In the meantime, he is anxiously waiting for news amid a blizzard of international diplomatic activity aimed at averting war.

On Friday. the UK government advised its nationals to leave the country but Mr Gleeson decided to stay put.

‘It’s a rollercoaster,’ he said. ‘Both emotionally and with the information that we get. It’s mixed messages. We heard yesterday from Russia that they were going to pull out a little bit and then Boris Johnson was saying that field hospitals are being set up less than 100 miles away from where I live, which is a fairly clear indicator.

‘On the one hand yesterday there’s a little bit of relief, then that’s immediately wiped out by a little more information we get.

‘Nothing really changes for me, stay clear of the potential action until we get the satellite images to say that the build-up has gone.

‘Ideally then we get the message from the government to say the ex-pats can come back and rebuild a bit of confidence but it’s extremely hard to think where this is going,

‘I’m constantly glued to my phone to see where this is going. It creates so much instability. We hear that this is because of Nato but to me that’s a joke because Ukraine joining Nato would be like an insurance company giving a policy to a house that’s being burgled, it doesn’t happen, so why that’s a concern of Putin’s?’

Originally from Oxford, Mr Gleeson has been flooded with messages of concern from friends and family in the UK.

‘I’ve been inundated, not only family and friends but people coming out of the woodwork,’ he said. ‘People have started reaching out and it’s nice being in people’s thoughts.

‘In terms of close friends and family my dad has said on WhatsApp “it’s a question of when, not if, so get out”. You have to laugh because it’s such a surreal thing but I have responsibilities and I can’t leave those behind. I’m aware of some ex-pats that have left their wives and gone home, that’s not much of a recipe.

‘When hopefully this all boils down they’re not going to have much of a marriage to come back to. She has an active UK visa that she took out for Christmas, but if she left she’d have to leave her family.’

Moscow announced on Tuesday that it has withdrawn some military units from the border with Ukraine after they completed drills.

The move drew a wary response from the West. Joe Biden warned an invasion is still ‘distinctly possible‘ and said 150,000 troops were still massed on Ukraine’s borders.

Nato Secretary General Jens Stoltenberg also countered the Kremlin’s messaging today by saying, ‘on the contrary, it appears that Russia continues the military build up’.

Russia has repeatedly said it has no plans to invade Ukraine and accused the West of behaving provocatively in the region.

Mr Putin said on Tuesday that Russia does not want war and it had ‘put forward proposals for a process of negotiations’.

Queen pushes Kate, William and Charles to fore in tweet as she is forced to sit out summit