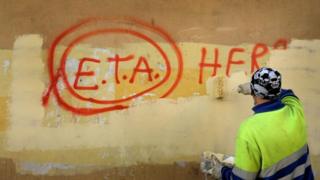 For four decades, the armed organisation Eta has waged a bloody campaign for independence for the seven regions in northern Spain and south-west France that Basque separatists claim as their own.

In April 2017 the militant group revealed the locations of its weapons caches, and said it had completely disarmed.

But the Spanish government said the group would “get nothing” in exchange. It demanded that Eta “disarm and dissolve itself”.

Its announcement followed a decision on 5 September 2010 not to carry out further attacks. In January 2011, it declared a permanent and “internationally verifiable” ceasefire but refused to disarm.

The group – which killed more than 800 people and wounded thousands in more than 40 years of violence – aimed at Basque independence. It had declared at least two ceasefires before, but abandoned them both.

Under Franco the Basque language was banned, their distinctive culture suppressed, and intellectuals imprisoned and tortured for their political and cultural beliefs.

The Basque country saw some of the fiercest resistance to Franco. His death in 1975 changed all that, and the transition to democracy brought the region of two million people home rule.

But despite the fact that Spain’s Basque country today enjoys more autonomy than any other – it has its own parliament, police force, controls education and collects its own taxes – Eta and its hardline supporters have remained determined to push for full independence.

Its violent campaign has led to more than 820 deaths over the last 40 years, many of them members of the Guardia Civil, Spain’s national police force, and both local and national politicians who are opposed to Eta’s separatist demands.

However, in recent years the group has been under pressure. Although it has mounted occasional attacks, experts believe that concerted political and police action has squeezed its capabilities.

Certainly the days in the late 1970s, when the group was able to kill 100 people per year on average – just as Spain was awakening from a long dictatorship and moving towards democracy – appear to be long past.

After three people were killed in 2003, Eta refrained from any other deadly attacks until the last days of 2006.

The Eta of today has some logistical networks in France and a pool of a few hundred youths scattered across the borders of the Basque Country, in France and Spain, willing to engage in deadly missions.

French and Spanish police have sought to reduce Eta’s capability and the Spanish government and judiciary have banned the political wing of the movement, which seeks an independent state for the Basques.

The logic for banning the political wing, which has operated for the last decade under different names – Herri Batasuna, Euskal Herritarrok, Batasuna – is that both wings are inextricably linked.

Banning the political branch, it was hoped, would reduce the flow of funds and support to Eta units, and prevent it gaining political representation.

Spanish and French police, working together, have dealt a number of recent blows to the group.

The arrest of Eta’s suspected military head, Garikoitz Aspiazu Rubina, in November 2008, followed the detention of its political commander, Javier Lopez Pena, six months earlier. Both arrests took place in France, long used as a base by Eta.

Since then, French and Spanish authorities have announced the arrest of a string of allegedly senior figures in Eta, giving the impression that they have the group on the run.

At the same, popular support for Eta was slipping away, correspondents say.

This was not only because of the gains made by moderate Basque nationalists, but also because there was a growing feeling that Eta was desperately out of touch with public opinion.

In May 2009, radical separatist parties were excluded from Basque elections.

Basque Nationalists failed to win an outright majority and the Basque parliament voted in its first non-nationalist government in 30 years, led by Socialist Patxi Lopez.

Eta’s July 1997 kidnapping of a 29-year-old local councillor for the ruling Popular Party in the Basque region, Miguel Angel Blanco, was a turning point in public opinion.

The group demanded that, as a prerequisite for his release, its 460 prisoners who were held in jails all over Spain be returned to the Basque region. The demand was not met.

Blanco was found shot twice in the head. He died in hospital 12 hours later.

Horrified by the young councillor’s death, more than six million people across Spain took to the streets over four days to demand an end to Eta violence.

The massive public mobilisation was likened to the marches for democracy that took place towards the end of Franco’s regime, and in an unprecedented move some of Eta’s own supporters publicly condemned the killing.

The following year, Eta decided to call an indefinite ceasefire.

But that was officially ended in December 1999 after the then government refused to discuss Eta’s demands for Basque independence.

The Spanish government had always maintained it would never consider entering talks with the armed group unless it renounced violence.

The Popular Party campaigned for re-election in part on its tough line against Eta and its defence of Spain’s constitution in the face of demands for greater autonomy from the Basque country and Catalonia.

But the 11 March 2004 bomb attacks in Madrid introduced a new factor in the equation.

The Popular Party initially said the attacks were the work of Eta, although the finger of blame soon moved to point at Islamist groups.

The electorate rejected the government and voted in the Socialist Party, partly because the Popular Party was perceived to have misled them.

Eta attacks declined in the wake of Madrid bombings, as the group was thought to believe it could no longer achieve its aims by violence.

However, its 2006 ceasefire, described as “permanent”, was illusory.

At least eight people have been killed by the group since then.

‘This isn’t China!’ Meghan and Harry backlash for ‘telling BBC how to report interview’