Home » Europe » When I first came to the UK, I was so homesick I stopped eating for a week

I never thought twice about making the two-hour journey from Kent to London – alone – to file my Iranian family’s asylum applications when I was in my mid-teens.

It was the early 1980s and when I eventually arrived at the headquarters of the UK Visas and Immigration centre in Croydon, I waited hours for my name to be called.

While anxiously looking at the clock, a sympathetic elderly lady offered me food after assuming correctly that I was hungry. I made this trip every six months for a period of two years – all by myself.

As the child of immigrant parents, it was just the way things were that I’d be expected to take care of this for them. It never occurred to my parents to accompany me as they would be of no help because they couldn’t speak English well.

It was only after having kids of my own and seeing the freedom they enjoyed that I truly realised just how much my immigrant parents depended on me to look after them. I essentially took on the parental role – and all of the responsibilities that came with it.

I grew up in Kuwait City. I loved my childhood, despite my mother tongue, Farsi, never being spoken outside of our home.

In Iran, where we went to each summer, we were again different. As Baha’is – a religious minority – we felt very much not part of mainstream life because our people are persecuted in Iran and are banned from everyday public life.

As a young child, I once visited my grandmother in Yazd and we had to use public baths. We were only allowed to go on a particular day for non-Muslims.

Around the age of 10, my parents sent me to the UK to live with my aunt and uncle, who lived in Brighton at the time – but I had never met them before.

I was meant to attend a language school but I absolutely hated being here because I was away from my parents, siblings, and everything I knew. I was thrown into a culture that was alien to me so I just missed home. 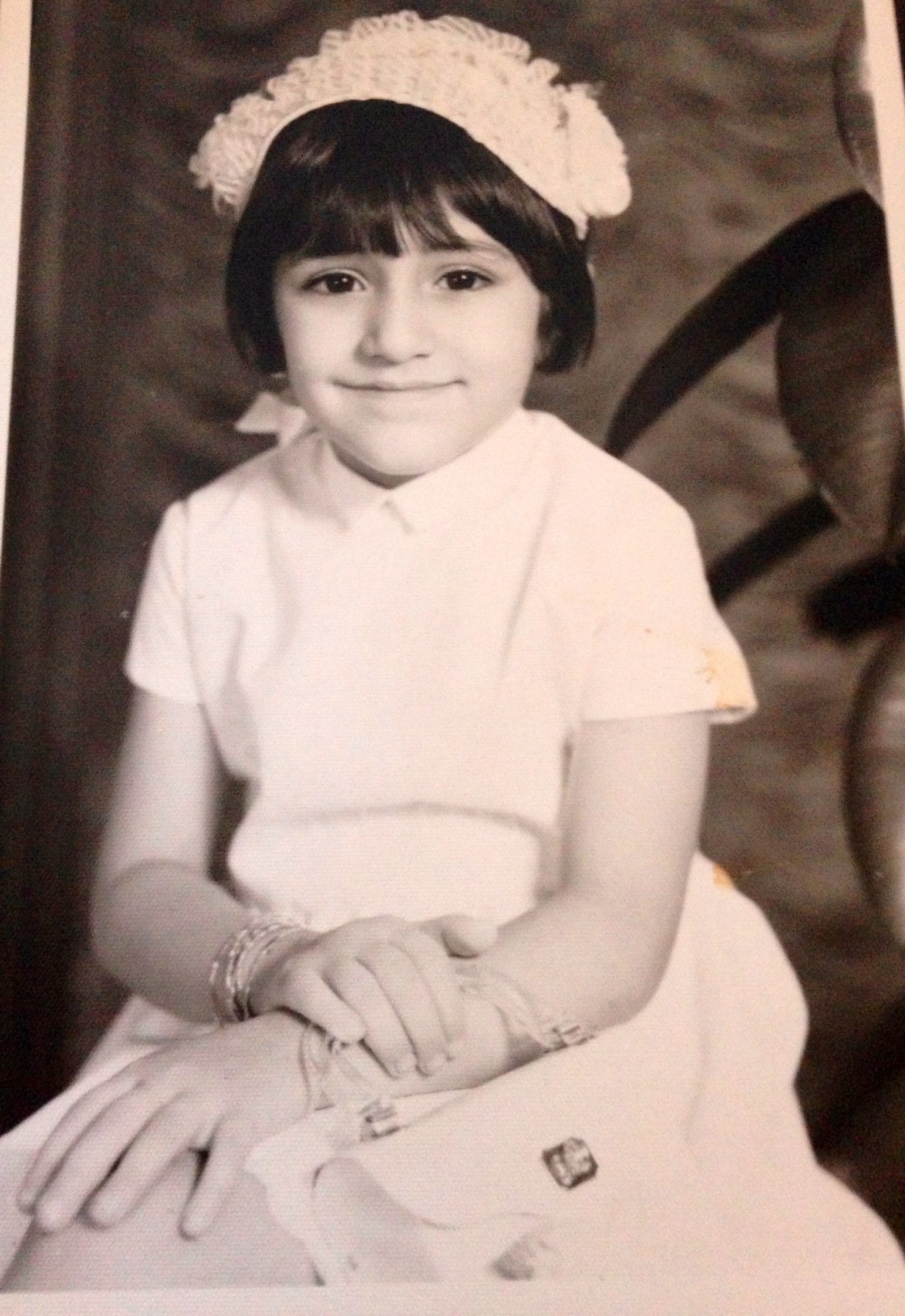 My first impression of the UK was utter bewilderment. Everyone was driving on the ‘wrong’ side of the road, there was constant rain and we had potatoes in some form or other with every meal.

The first time we drove through Brighton, there was a coach-load of men all showing their bare bottoms, which I thought was very odd. Later I discovered this was called pulling a ‘moonie’.

After a week in Brighton, I decided I simply could not keep living in the UK and I wanted to go home. The only way I thought I could go back to my parents was to stop eating, which I did for seven days.

The strategy worked and I was sent back. It felt like a holiday that had gone wrong. I never wanted to be away again.

My father in particular was determined that I should get a proper education. So I was presented with no choice but to go back to the UK a year later. My dad came with me this time to try to ensure a smoother transition. He also promised I could come back home for a visit during holidays.

By the time I came back to the UK, my aunt and uncle had moved to Broadstairs, which is close to Margate in Kent. Emotionally, I felt more ready this time.

A week after arriving, I started at an Arabic-speaking school. I also went to a special school where English was taught as a second language. My classroom resembled an airport transit area with so many different nationalities and age groups, but I was the only one below the age of 18. I would then come home in the evening to my aunt, who only spoke to me in English.

I missed my parents very much, so I was fine while I was busy at school but it would always hit me when I came home in the evenings. I became a prolific letter writer to try to cure this homesickness.

My brother – the eldest of my three younger brothers – joined me in the UK a year later and I loved having him with me, but it also felt like extra responsibility. I wanted to make sure he was OK and would try and protect him, like eating his brussels sprouts when no one was looking because he hated them.

He was very unhappy and missed my parents very much. For the first few months, he would disappear into our shared bedroom and cry.

During school holidays, we would go home to my parents and from the moment of arriving, we would be thinking about how horrible it would be to leave them. We’d be crying several days before our flight, all the way through the journey and a few days after getting back.

In 1979 – just before the Iranian revolution, which exacerbated tensions and violence against Baha’is – my mother and brother moved to the UK too.

By this stage, I was around 15 and I had been in the UK for three years since returning after my first failed attempt. I was fairly confident with English but regardless of how confident I was, I was still the best speaker in my family so that’s why a lot of responsibility fell to me.

My father couldn’t come at the time because he needed to work to help provide for us. After the revolution, he knew his days in Iran were numbered though, so he joined us two years later in 1981 and that’s when my family applied for asylum. My youngest (and third) brother was born after we’d settled in the UK.

Strangely, with my parents arriving, our lives as children changed. Our roles reversed, with my middle brother and I taking on the responsibility of parents and interpreting too. Not only sorting out visas, but doctor appointments, banks and everything that was necessary in running a home.

At that stage, my parents could not communicate very well in English so they both enrolled in an English language school, but it was difficult for them. I actually think they had lost their confidence and self assurance being in a different country.

We settled in Broadstairs to be close to my aunt and uncle, which was a huge help in making my parents feel comfortable. As Baha’is, they very quickly found a community in local and exiled Persians.

My uncle would help my brothers with their school work and would turn up at our parents’ evenings – with or without my mother. They kept an eye on our education on behalf of my parents who didn’t really understand the English system.

Job-wise, they tried but it was very hard initially. My father ultimately set up a small Persian coffee shop, which didn’t make much money but acted as a social hub for other exiles. My mother had her hands full with her children, but did manage to find time to do some knitting for a local shop.

When I was 16 years old, I remember making an appointment with our local MP, who was Jonathan Aitken at the time, to discuss the asylum status of the Baha’is who were being persecuted – something my father was very passionate about raising awareness for.

I had to rush home from school, change my uniform and go with my dad as his interpreter. It’s only in hindsight that I realise this wasn’t the norm for a lot of kids my age.

I am sure this is not just my experience but the circumstance of many children of displaced parents. We could never go to our parents for problem-solving as we didn’t want to add to their troubles, they just seemed to say you know best and they couldn’t help anyway.

I was very conscious of their sense of vulnerability and fragility as displaced people so I never spoke to them about difficulties at school. The barrier wasn’t really put up by them, it was us protecting them.

The dynamics of the relationship haven’t changed much. My three siblings are all in the UK and I am still in this responsible parent role, which means we all do our share with my mum after our dad passed away.

My mother now has half-English grandchildren – from my brothers and I who have English partners and our children are of mixed heritage – whom she adores and respects. It gives her great pleasure to cook Persian food for them.

She talks to them about her life back in Iran and the children understand their Persian family culture and the importance of intergenerational gatherings.

Looking back, my parents saw education as a way forward in a country where you have no anchor. I appreciate that now more than I did then. All their parental efforts went into our schooling.

As for me, I’ve never forgotten how grateful I am that my parents were given a safe haven in this country. It’s why, when the Syrian refugee crisis started emerging, I wanted to do something to help.

I was in between jobs at the time so I decided to set up Freda, an eco period care brand helping to provide period care to refugees. It helps that I’m married to a gynaecologist.

My upbringing, although unusual, has stood me in good stead. I am resilient and accept life doesn’t always go according to plan. More importantly, home for me is wherever my family are regardless of the physical geography.

As told to Minreet Kaur.

People with runny noses or headaches urged to get Covid test