Home » Europe » When is this gesture not OK? 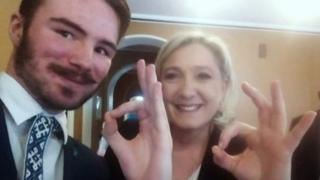 France’s Marine Le Pen, of the far-right National Rally, is the latest politician to find themselves in hot water for signalling that everything is OK.

While visiting Estonia’s far-right EKRE party, which has just entered government, she made the ancient hand gesture in a selfie with the party’s youth leader, Ruuben Kaalep.

There is just one problem – the symbol has been widely used by white nationalists in recent years, and for many people has taken on a darker meaning.

But she has still come in for criticism, with some asking how the political leader could be ignorant of a major trend among the far-right scene she operates in.

From the ultra-right to American conservatives and even the suspect in a mass murder, the symbol is being used to “troll the media” and ruffle feathers.

So when is the gesture not OK?

The entire saga started out as an online joke – taking an innocent and widely-used gesture and pretending there was a sinister hidden meaning behind it, hoping to trick the media and left-leaning people into outrage.

But the joke was so successful, and the gesture so widespread among the far-right and white nationalists, that many believe the OK sign is changing meaning.

It was even used in court by the suspect in the Christchurch killings, after he killed 50 people after opening fire on two mosques – bringing it to international attention as a genuine white power symbol.

It all began in 2017 on the infamous internet message boards 4Chan. Through its long and controversial lifespan, the site has been the source of many internet memes and jokes but also has a strong right-leaning political audience.

The hoax planned on 4Chan was simple – to ridicule media by convincing reporters of a fake white power symbol. The preposterous reasoning to be given was that in a hand making the OK sign, the three straight fingers make a “W” shape, while the closed thumb and forefinger symbolise the letter “P”.

It was wildly successful, and the popularity of the gesture used to mock left-leaning people or “troll” viewers exploded.

In the two years since, however, its constant use by right-wing or extremist individuals has turned the hidden meaning into a genuine connotation.

As the US Anti-Defamation League (ADL) puts it: “By 2019, at least some white supremacists seem to have abandoned the ironic or satiric intent behind the original trolling campaign and used the symbol as a sincere expression of white supremacy.”

Many now consider the sign to be a white nationalist “dog whistle” – a sign only intended to be understood by those in the know.

Which makes its use in the current political climate a bit complicated.

Around most of the world, the OK sign still means what it always has – that everything is fine.

In some countries, however, the gesture is considered vulgar. It can also have other meanings – among young men, it is frequently used in the “circle game”, where making the sign below the waist and getting a friend to look at it entitles the prankster to thump said friend on the arm.

Before the hoax tried to invent an alternative meaning, supporters of US President Donald Trump had frequently been photographed using the OK sign – a gesture in selfies which spread among the group.

“In the end, it can mean almost anything,” as the US-based Southern Poverty Law Centre says in its explanation of the topic.

The ADL, too, warns against jumping to conclusions about the meaning, saying the “overwhelming usage” is still the traditional sense.

“Someone who uses the symbol cannot be assumed to be using the symbol in either a trolling or, especially, white supremacist context unless other contextual evidence exists to support the contention,” the organisation says in its educational material.

“Since 2017, many people have been falsely accused of being racist or white supremacist for using the “okay” gesture in its traditional and innocuous sense.”

Context, then, is key: which is why Estonia’s EKRE, who Marine Le Pen was visiting in May, have come under fire.

The group’s two most prominent leaders, father and son Mart and Martin Helme, both made the symbol while being sworn into office as they entered government.

Mr Helme the senior has suggested that indigenous, white Estonians are being “replaced” by immigrants, while his son has previously said “I want Estonia to be a white country”.

But it has also spread far outside politics. A Chicago baseball team banned one fan from the stadium for making the sign on a television broadcast, while a US Coast Guard employee was pulled from duty for the same offence.

What began as an online joke has transformed into a loaded gesture with very real consequences.

WEEK OF RECKONING: May to unveil CRUNCH votes including no deal and CANCELLING Brexit