Home » Europe » Where Kale Is King (at Least, When It’s Stewed in Schmaltz and Bacon)

WARDENBURG, Germany — The weather was perfect as the group pulled their wagon — decorated with flashing lights and pumping out German pop songs from an industrial speaker — out into the fading winter afternoon light. Warm enough to enjoy a hike through the frost-clad countryside, but cold enough to work up an appetite.

No one in the group, save for the Kale King and Queen, knew the route. But everyone knew the next four hours of meandering down byways lined with pastures and fields, stopping at corners for games and several shots of schnapps, were only the warm-up.

“Don’t be afraid when you see it on your plate,” one hiker, Lena Bauer, said of the reward everyone knew was coming — curly kale stewed in pork fat or goose fat, and served up with bacon, sausages and steamed pearl potatoes. “It tastes so much better than it looks.”

“Really,” Ms. Bauer, a native of nearby Oldenburg, insisted with a laugh, though she confessed that it had taken her years to warm to the annual ritual. 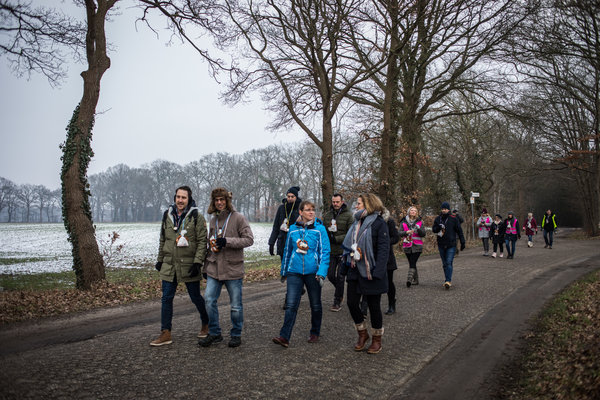 “Before, I never wanted to go along, but after I did, I understood it,” she said. “It’s not about the kale. Some people like it, some don’t. It’s about togetherness, belonging and good friends.”

In this corner of Germany some 50 miles south of the North Sea, kale is more than the essential ingredient for superfood smoothies or a better-for-you-than-broccoli vitamin bomb. It is a season, an event, a tradition.

Bavarians’ annual beer festival, Oktoberfest, is known the world around. Carnival parades are common in many parts of Germany’s Rhineland and Roman Catholic south in the months before Lent.

But the hikes and feasts surrounding the annual harvest of kale — grünkohl, in German — in the flat lands around Oldenburg and Bremen are unknown internationally and draw blank looks from most Germans.

A few years ago, the city of Oldenburg set out to change that. Calling itself the country’s “Kale Hike Capital,” it began promoting events surrounding the winter walks, held from November through late February.

The hikes are organized by groups of families, friends or colleagues, and range in distance from about one to three miles. A royal pair, crowned anew each year — and offering their services as volunteers — are tasked with finding the routes and organizing the next year’s events.

During the season, local restaurants and pubs are packed each weekend with long tables of people coming in from the cold for all-you-can eat feasts of locally grown kale, with all the trimmings. That includes a mildly spiced sausage stuffed with groats, a regional specialty known as pinkel.

Kale is served, along with bacon, pinkel and pork,

Now everyone is encouraged to bravely lift their forks!

One recent Saturday night, a dozen groups of hikers arrived at Wassermühle Wardenburg, a white-stucco restaurant perched beside a pond and topped with a thatched roof. They had spent the day navigating horse paddocks and turned-over fields, and now they were being met with mugs of hot mulled wine.

The morning before, a team of cooks had started washing, chopping and stewing the leaves for the kale feast.

“Kale tastes best the day after it’s cooked,” said the restaurant’s owner, Markus Hammann. Beyond that, he was guarded about the exact recipe. “Only the cook knows.”

One of the hikers, Maik Gruel, was more forthcoming about what goes into the dish.

“You need lots of onions sautéed in pork schmaltz, then you add the kale and bacon and cover it with water,” revealed Mr. Gruel, who left the region 22 years ago to settle in the hills of Hesse, and regularly makes the five-hour drive home to join friends for the kale hike.

After that has simmered for about an hour, he said, “you add lots of salt, pepper and some mustard.”

Then you cook it another good hour.

Dirk Albach, a professor of biodiversity at the Carl von Ossietzky University of Oldenburg, shook his head at the long cooking times. It is a convention rooted in the plant’s past, he said, like the belief that the green cannot be harvested until the first killing frost.

Unlike the milder variety grown in Italy or the strain popular in the United States, the hardy kale common here is known for its bitterness.

It grows increasingly tender the longer it stays on the stem, and takes on more flavonoids as the temperatures drop.

“Back in the 17th and 18th centuries and up into the 19th, every farmer grew their own variety of kale, which were extremely local,” Professor Albach said. “Many of these were lost when the seed sellers arrived in the 20th century. But they pushed varieties that were easier to harvest.”

The old notions remain, however.

The association of kale with the cold is so firmly stuck in people’s minds, farmers have a hard time selling the crop if the temperature is too high, said Eike Frahm, who runs the Grummersort farm co-op.

“We can have beautiful kale at market, but if it’s not cold enough, people simply won’t buy it,” he said.

The origins of the hikes are believed to lie in a long-ago practice of wealthy landowners who were out in the countryside for a bit of winter fun.

They would drop in on an unsuspecting farmer to warm up, the story goes, knowing a pot of the stewed greens would be found simmering on every stovetop.

In recent decades, the tradition has evolved into a festival of local heritage, and a night out with friends. Restaurants and innkeepers offer packages of all-you-can eat meals, followed by a dance.

During one recent hike, the reigning Kale King, Alexander Schulte-Deme, halted the group only a few dozen yards in, and announced the first game.

Two teams tied hot dogs to strings dangling from their waists and tried, with a dexterous combination of rocking and bending worthy of a fitness class, to take a bite. A walnut-smashing contest and a three-legged race followed later down the road.

“Every year the royal pair have to think up two or three games,” said Margret Wache, this year’s Queen. “The hardest part is finding the restaurant, then you have to plan the route and walk it beforehand and stock the snacks and drinks.”

Among the hikers in her group this year was Jens Warntjes, who said he was on his first of three planned hikes this year — “this one, with my friends, then with work, then my wife’s friends.”

“After that,” he said, “you don’t need to eat kale for another year.”