Home » Europe » Where Reindeer Are a Way of Life

KAUTOKEINO, Norway — Reindeer herding is not a job for many Sami, an indigenous people of fewer than 140,000 who inhabit mostly the northern reaches of Sweden, Norway, Finland and Russia. It is a way of life.

Jovsset Ante Sara, a boyish-looking 26-year-old, knows the tundra as if it were a city grid, every hill and valley familiar, the land acquired over generations through the meticulous work of his ancestors.

He can tell his reindeer from any others by their unique earmark. And he and his family need them to live and preserve their claim to the land as well as their traditions.

That’s why, Mr. Sara says, he has refused to abide by Norwegian laws, passed more than a decade ago, that limit the size of reindeer herds. The measure was taken, the government says, to prevent overgrazing.

Mr. Sara’s herd was capped at 75. So every year, if the herd grows, he must pare it down. At least, those are the rules. He has refused to cull his 350 to 400 reindeer, and took the government to court. 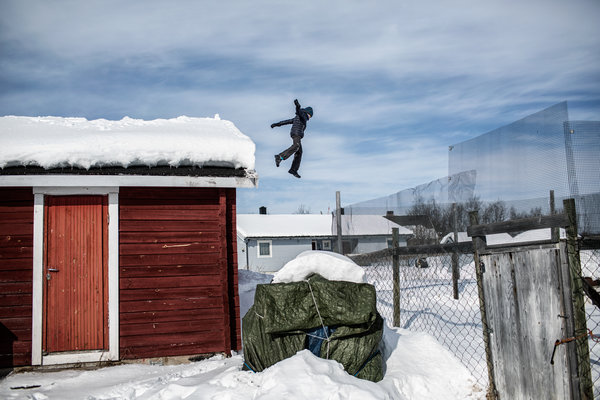 “I sued because I could not accept to see my culture die,” he said.

He lost his case before the Supreme Court and has accumulated fines of $60,000, with the threat of losing his land hanging over him.

The government has given him to the end of this year to comply or he will begin to accumulate additional fines, and eventually could lose his reindeer.

The case is just one of the many battles the Sami of Norway have fought over a long history with the government to preserve their culture and way of life.

The Sami were colonized by Christian missionaries, forced to abandon their shamanistic ways and assimilate. Grim tales of Sami children being sent to boarding schools and studied by anthropologists in dehumanizing ways remain a stain on the history of the Nordic nations.

Today the Sami of Norway number roughly 55,000, with 10 percent directly involved in reindeer herding. The reindeer population in Norway is estimated at 220,000. Herders earn a living by selling reindeer for meat as well as for their hides.

“When we kill the reindeer, we use every part of the animal,” Mr. Sara said.

The skins are transformed into mittens and slipper-like shoes that curl up at the tip. The meat is sold on a wide scale across Norway and also exported. Antlers are pulverized into a Viagra-like drug sold on the Chinese market.

The Norwegian government has been trying to erase the errors of the past, and so today, the Sami have their own university, schools that teach the Sami language, and even their own Parliament, if largely symbolic.

Kautokeino is in Finnmark county in Norway, considered the heart of Sapmi, or “the land of Sami.” At an Easter festival this year, young people beat on drums while listening to traditional Sami yoiking, a guttural call that was forbidden during colonization. They wore traditional clothing known as Gakti, and sipped on Red Bull and beer.

Elle Márjá Eira, 34, is a reindeer herder, singer, filmmaker and mother of two. She can recall tales of forced assimilation, and even burnings by missionaries.

Although many older Sami have maintained a Christian faith, Ms. Eira is part of a younger generation who have actively opposed discrimination and industrial projects, which the Sami see as a constant threat to their way of life.

Her father, Per Henrik Eira, 56, together with his fellow herders, recently sued a government energy project led by Statnett, the government-owned electric company, which they say is threatening to overtake a large portion of their summer grazing lands.

He and his neighbors lost the case. Statnett says its project does not threaten Sami culture.

“When we lose this pasture,” she said, “we will need to find another place to calve, a place which is not occupied with other herds. By pushing us into smaller areas, they are forcing us into conflicts with each other.”

She and other Sami voice similar arguments against the laws limiting the size of herds.

“The problem is that the government doesn’t say exactly who has to kill their reindeer,” Ms. Eira said. “It just leaves it up to the family.”

She continued: “Even my 15-year-old daughter has her own reindeer. We all do. My father has decided that he will pare down the herd starting only from his reindeer, to avoid conflicts.”

Many Sami reindeer herders see the quotas as an effort by the government to limit their livelihood so it can use the land for industrial projects.

Ninety-five percent of the land in Finnmark county is owned by the state, although Sami reindeer herders, who hold legal grazing rights, use much of it.

The regulations limiting herd sizes were passed in 2007, forcing Sami to eliminate 30 percent of their reindeer at the time.

“Clearly it’s not possible to make a living as the job has become quite expensive, requiring snowmobiles and all the equipment that goes along with that,” he said.

The law also states that any herders who are no longer profitable can lose their license. But that is not all Mr. Sara said he would lose.

“I would lose everything my ancestors worked their entire lives to create for us today,” he said. “I will lose the land.”

To call attention to her brother’s case, his sister, Maret Anne, an artist, piled 200 heads of freshly slaughtered reindeer onto the snow-covered lawn of the courthouse in Tana in 2014. She topped off the grisly pyramid with a Norwegian flag. Mr. Sara won, twice, in local and regional courts.

Last fall, when he stood before the Norwegian Supreme Court, his sister strung a curtain of 400 reindeer skulls in front of the country’s Parliament.

Mr. Sara and his lawyer, Trond Pedersen Biti, have taken their case to the Human Rights Council of the United Nations in Geneva.

Others are more fatalistic, like Mr. Eira, who sued to try to block the Statnett project, and lost. His 18-year-old son, Per John, is following in his father’s footsteps, training to be a reindeer herder.

“If I lose this case, I won’t have the courage to face my son,” he told the court, “because I will be forced to tell him that there is no future for us.”

China Enlarges Its Circle in Europe, and Tries to Convince Europeans It Comes in Peace