Home » Europe » Who’s on strike today and how will it affect you? Daily update for January 12 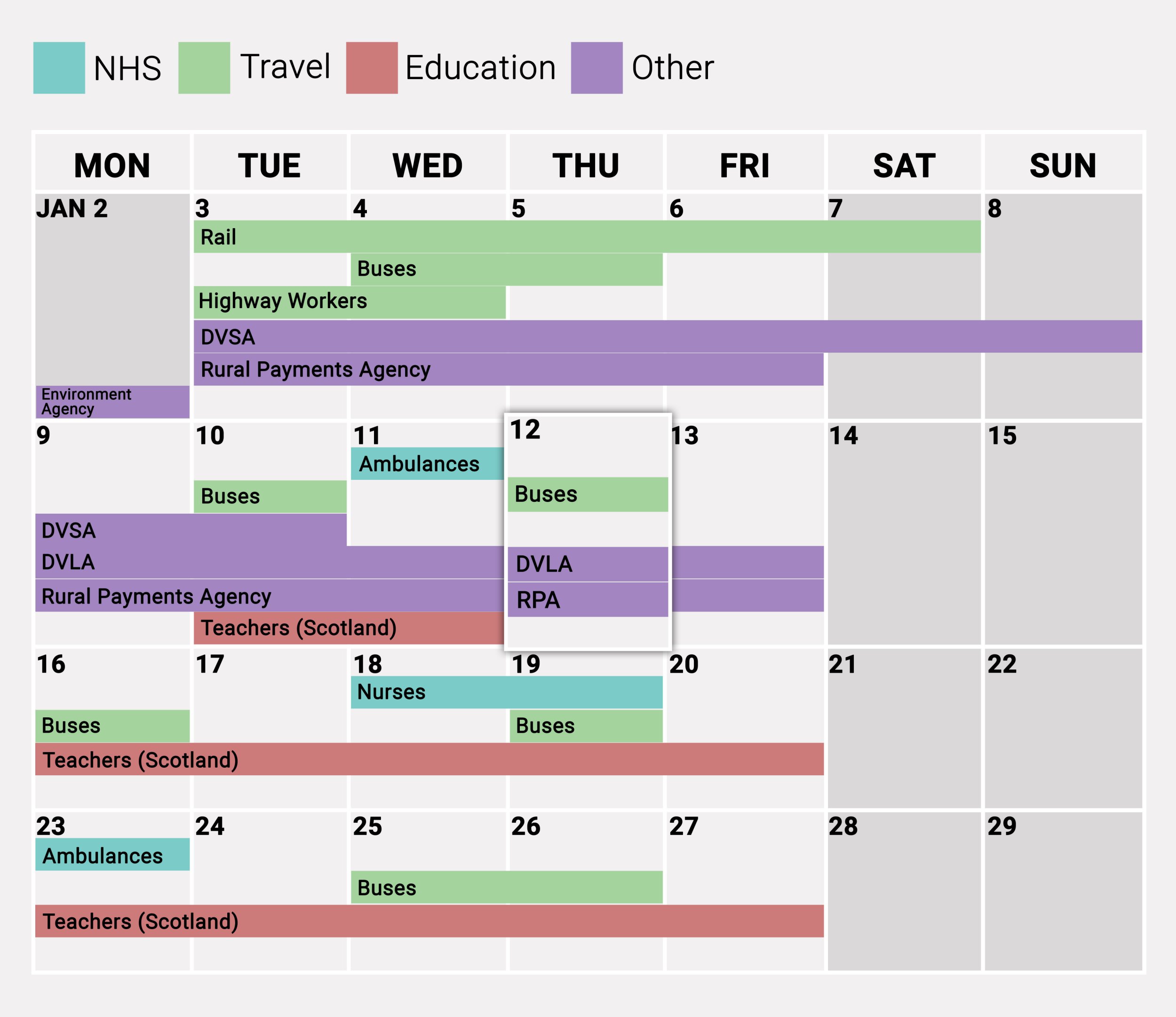 Another day, another round of strikes.

From railway employees to factory staff, strikes involving a range of industries have taken place in the UK for months – and it’s not going away anytime soon.

Disputes over pay and working conditions amid the stubborn cost-of-living crisis have led to stoppages in rail services, postal deliveries and in the NHS.

Today, buses will be the latest sector to be impacted.

Members of the largest UK trade union, Unite, who work for Abellio bus services will walk out today.

This means a lot of bus services in west and south London, where Abellio operates, will be disrupted.

Transport for London has urged travellers to check before they travel and look to alternative routes if needed.

Which bus routes will be affected by strikes?

This is the second of eight total strike days, with the next being Monday.

Bus workers are striking as they say Abellio is making record profits yet pay offers have been few and far between.

As inflation drives up the prices of everyday essentials like food and fuel, union leaders say full-time drivers with under two years’ experience earn £3.29 less per hour than colleagues with more than two years.

Unite general secretary, Sharon Graham, said: ‘Abellio is content to horde mountains of cash but has imposed a completely unacceptable pay offer on its drivers.

‘It is disgraceful behaviour and our members are rightly furious. Unite always fights to defend and improve members’ jobs, pay and conditions and Abellio’s south and west London workforce have their union’s unflinching support.’

Timeline of strikes over the next few weeks

Workers on London’s Elizabeth line will go on strike.

RPA staff will continue their walkout.

RPA staff to continue their walkout.

EIS to stage a national strike for 16 consecutive days until February 2, which will see members in two local authorities strike each day.

Royal College of Nursing (RCN) members in England will strike.

RCN members in England will continue their strike.

Unison members working for five ambulance services in England will stage another walkout.

London bus workers at Abellio will continue to strike.

Physiotherapists who are members of the Chartered Society of Physiotherapy will strike.

London’s transport will be shaken even more as the TSSA Union voted for industrial action today for its members working on the Elizabeth line.

There will be no service on the central section of the line from Paddington to Abbey Wood.

On the east (Liverpool Street-Shenfield) and west (Paddington-Reading/Heathrow) sections of the line there will be reduced service, TfL says.

This will be the first time will be directly hit by strike action as line managers who are part of the TSSA union join the picket line.

Members of the National Union of Rail, Maritime and Transport Workers (RMT) and Prospect unions who also work for the TfL subsidiary that runs the line will also take action.

Workers processing driving licences for people with medical conditions are striking today until Saturday in Birmingham’s Driver and Vehicle Licensing Agency (DVLA) offices and at the Swansea Morriston site.

While members of the Public and Commercial Services Union who work for the Rural Payments Agency (RPA) won’t be clocking in today either.

This will be the penultimate day agency staff will strike and will impact the RPA supporting the farming and food sector.

Talks between the Scottish Negotiating Committee for Teachers (SNCT) and the Scottish government failed to agree on a 10% pay rise as inflation reaches 11%.

There were fewer ambulances on English and Welsh roads as well as emergency services workers took action yesterday.

Unions representing paramedics, call handlers, drivers and technicians have been toe-to-toe over pay with the government over pay.

But Prime Minister Rishi Sunak is looking to stamp out further strike action by rolling out anti-strike laws even as public support remains high.

The government proposed earlier this week that threaten to crack down on workers’ right to strike, unions say.

The measure includes allowing unions to be sued and even striking staff to be sacked if ‘minimum service levels’ are not kept up in key sectors.

Olivia Colman’s ‘fear’ at Queen’s reaction to The Crown portrayal: ‘Oh my God!’