BERLIN — The woman charged last week was 94 and had worked as a secretary. This week, German prosecutors charged a 100-year-old man who had worked as a guard, like the man convicted last year, aged 93.

These three Germans are part of a diminishing ripple of criminal prosecutions related to the Nazi war crimes of last century. Not only are the defendants ever-more aged than those tried in past decades, but they are also less likely to have had a direct role in the atrocities committed in their proximity decades ago, and some were underage at the time.

Now they have been caught up in Germany’s race against the clock to bring the final members of the Nazi generation to justice. Some Germans have pushed back against their country’s attempts, however late, to serve justice on those who helped perpetuate some of the 20th Century’s worst crimes, but others say the rise of a new far right has made the prosecutions more important than ever.

“It took a long time, which has not made things any easier, because now we are dealing with such elderly defendants,” said Cyrill Klement, a prosecutor in Neuruppin, whose office pressed charges against the 100-year-old man. “But murder and accessory to murder have no statute of limitation.”

Over the years, the German justice system has expanded and contracted its interpretation of who was guilty of the murder of millions in the vast network of concentration and death camps run by the Nazis. For decades, watchmen and others in low-level positions were seen as not directly enough associated with the killings to be charged, but a Munich court’s decision a decade ago widened the scope of who could be prosecuted.

When a judge convicted John Demjanjuk, a former autoworker in Ohio, in 2011 of assisting in the deaths of 28,000 people who perished at the Sobibor camp where he worked as a guard, he ruled that it was impossible for anyone to have worked at a concentration camp and not been part of the Nazi death machinery.

Mr. Demjanjuk died in 2012 before an appeal could be heard before the high court. Nevertheless, his case signaled a shift in the German justice system. 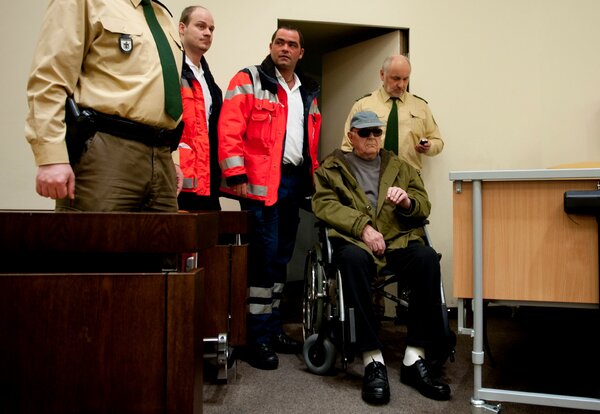 “The Demjanjuk ruling was very important because it showed that we had some catching up to do,” said Thomas Will, the prosecutor who leads the German government office tasked with investigating Nazi-era crimes. “It was an initial spark that led us to examine the guards from all of the camps, not just the death camps, under the idea that what took place there could not be overlooked.”

Since then, several men and women in their 90s and older, who had worked as guards or administrators at concentration camps, have faced charges in German courts. The most recent convictions came in just the last week.

“These cases are important contextually, but also symbolically,” said Axel Drecoll, director of the Brandenburg Memorials Foundation, which includes the Sachsenhausen and Ravensbrück concentration camps. “It shows that the German justice system takes seriously and continues to pursue these crimes. It is eminently important.”

Prosecutors in Neuruppin, in the eastern state of Brandenburg, have not named the 100-year-old defendant they charged on Tuesday with assisting in the murders of 3,518 people who perished while he served as an SS guard at Sachsenhausen between January 1942 and February 1945.

“These include, among others, the execution by shooting of Soviet prisoners of war in 1942,” the court in Neuruppin said in a statement. “In addition, the charges include accessory to the murder of prisoners through the use of the lethal gas Zyklon B as well as the shootings and deaths of prisoners through maintaining life-threatening conditions in the former Sachsenhausen concentration camp.”

Although prosecutors have deemed him fit to stand trial in a limited capacity, the court must now decide whether to bring the case to trial.

Sachsenhausen, located about 20 miles north of Berlin, served as the headquarters of the Nazi’s network of concentration camps throughout Europe Mr. Drecoll said. More than 6,000 camp guards and personnel were trained there before being sent out to work at other camps. Yet very few of them were ever brought to justice.

“Most of the perpetrators from Sachsenhausen got off scot-free,” he said. “The charges are a late, but important sign that such crimes will be brought to justice.”

The charges against the centenarian came after a 94-year-old woman — who, as a teenager, had worked as a secretary at the Stutthof concentration camp — was charged with 10,000 counts of being an accessory to murder and complicity in attempted murders for her role supporting the Nazi killing machinery there.

Because she was under 21 at the time of the offenses she is accused of, it is expected that she would face trial in a juvenile court, where she would be likely to receive a milder sentence.

Last year a Hamburg state court found Bruno Dey guilty of 5,230 counts of accessory to murder — one for each person believed to have been killed in Stutthof during the time he served as a guard there, from August 1944 to April 1945. Mr. Dey was tried as a juvenile, because he was a teenager at the time of his crime. He was 93 when he was handed a two-year suspended sentence.

Mr. Dey’s case followed the 2015 conviction of Oskar Gröning, a former SS soldier who had worked a desk job at Auschwitz, for complicity in the murder of 300,000 Hungarian Jews who were deported to the camp in the summer of 1944. Mr. Gröning, then aged 94, was sentenced to four years in prison, but his punishment was delayed by appeals and he died in 2018.

Mr. Will’s office then began looking into Nazi records to find Germans who were still alive and had served, in whatever capacity, in concentration camps.

Over the past decade, enough evidence of possible involvement was found to forward the cases of more than 200 people to the local prosecutors near their homes, who are then tasked with opening investigations that can lead to criminal charges.

“The trend now is to say that it is not just about mass executions or killing in the gas chambers, but that charges can be brought against someone who accepted that people were dying through cruelty, by starvation, neglect or freezing,” Mr. Will said.

Only a handful of prosecutors’ investigations have actually led to criminal charges in recent years, he said, and given the advanced ages of the defendants, several have died while under preliminary investigation.

Of those charges, only three have led to convictions. In addition to Mr. Gröning and Mr. Dey, Reinhold Hanning was found guilty in 2016 of assisting in 170,000 murders during the time he served as an SS guard at Auschwitz. He was 95 at the time of his conviction and died the following year.

Over the years, Mr. Will said, the government office that investigates Nazi crimes has become an indispensable archive that otherwise might not exist, a record of much of the country’s legal history, of World War II-era criminals and of how they have been processed. But the existence of the office and its work also send a wider message.

“Through our job, we make clear the importance of democracy and the rule of law,” Mr. Will said.

Meghan Markle snub: How Royal Family have exiled the Sussexes from their ‘future’ plans