Inspired by footballer Marcus Rashford’s campaign, businesses across the country have pledged to provide free meals for children from families struggling during the pandemic.

The Manchester United star has been pushing for the government to extend free school meals for eligible children over the school holidays until Easter next year, but MPs rejected it in a vote on Wednesday.

After a social media campaign by Rashford, more than 100 businesses have come forward to help – despite many struggling themselves.

Here are some of their stories.

Asad Arif knows what it is like to live in poverty.

“I’ve been there,” the co-owner of Mumtaz restaurant said. “[As a child] we had sugar water, sugar soup, if we were lucky. We obviously couldn’t afford much.

“But as you get older, you look at your mum, who is not eating herself and has to give you water with sugar, and you start realising things aren’t so good.” 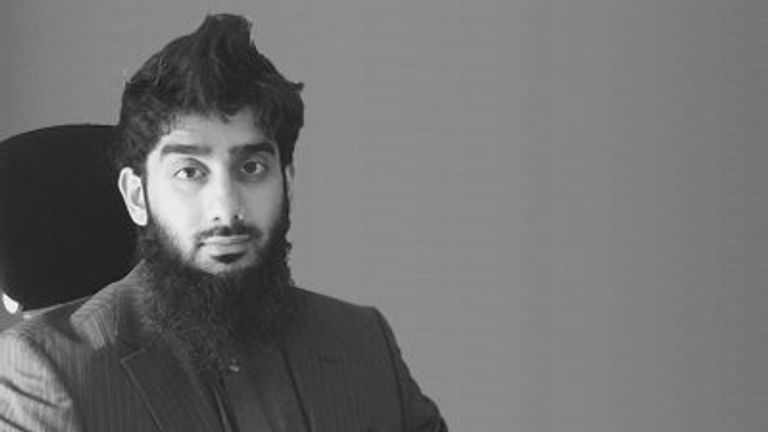 Mr Arif, who also works as a solicitor, said it was seeing MPs “bickering” on social media and “no-one actually doing anything” that pushed him to help.

In a social media post, he told children they could collect a free chicken or vegetarian biryani from his restaurant over the half-term week – and it went viral after being picked up by Marcus Rashford.

He said the offer would make a “world of a difference” to struggling families, insisting that it was not just about giving food but also “showing people that things will get better”. 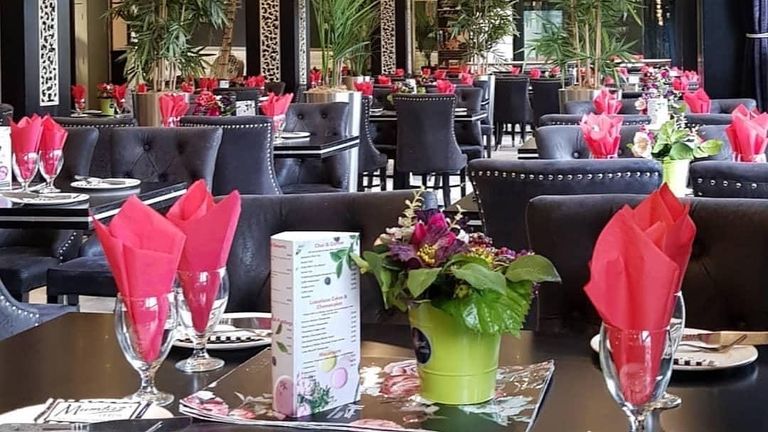 Mr Arif believes his restaurant will not survive beyond January after restrictions “absolutely destroyed” business.

But he believes it is still more important to help others.

“Based on our past and how fortunate we’ve been and the fact we have a roof over our head, there are other people who take priority and we can do something right now,” he said.

“I’m not being a hero, I’ve had a good time and I know things are looking bad and I predict things will get worse, but right now I can do something.” 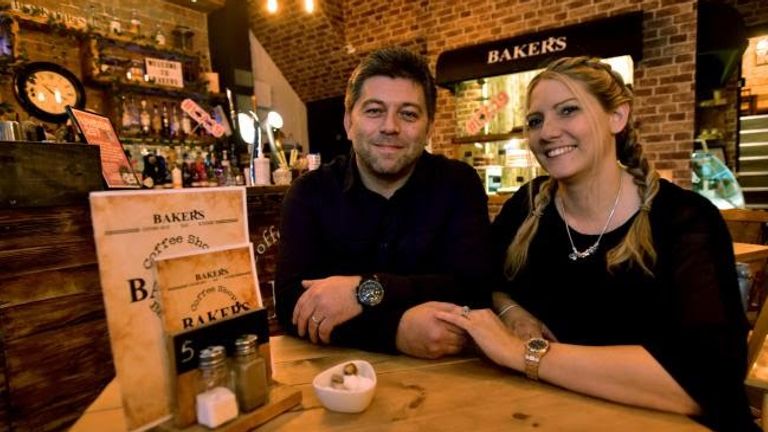 Before running her tea room in Egerton, Bolton, Angela Baker worked as a teacher for 15 years.

She taught many children who received free school meals and said the issue is “close to my heart”.

“We’re in the middle of a pandemic, people are losing their jobs through no fault of their own because of this virus,” Mrs Baker told Sky News.

“Even within the affluent areas, there are a handful of people that their circumstances have changed – sometimes literally overnight – and they’re struggling to make ends meet.”

Many businesses in the hospitality sector are struggling themselves. 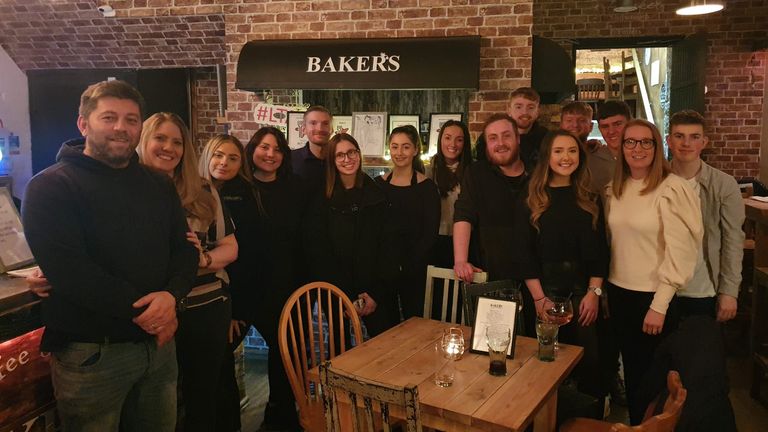 Bolton has been “hit really hard” by restrictions, Mrs Baker said, with the area now under the toughest Tier 3 rules and many firms have been forced to close.

“Those businesses that are now closed are saying ‘right, we’re free next week, what can we do?'” Mrs Baker said.

Baker’s has pledged to provide grab bags of lunches for eligible children and there will be collection points across Bolton where the food can be picked up.

“Our community has supported us so much through such a difficult time in hospitality that we just wanted to give something back,” Mrs Baker said.

The Greystones pub in Sheffield 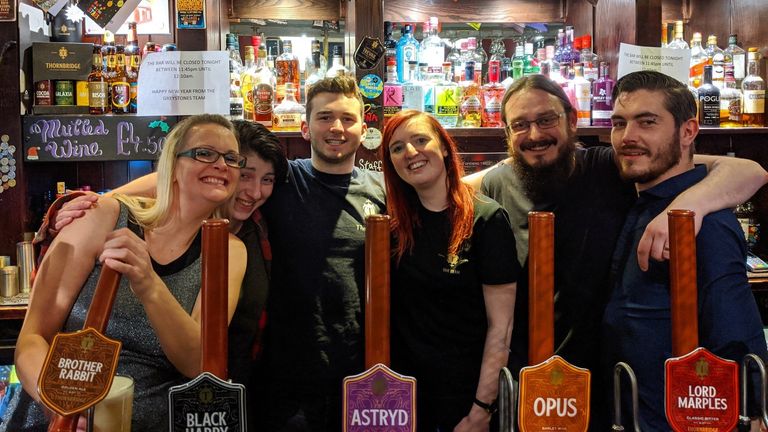 The Greystones has been forced to close for the time being as the area has moved into Tier 3 restrictions – but that hasn’t stopped its owners wanting to help out.

“It’s just a way for us to still be there for our community, even though we’re going to be shut as a business,” landlord John Duffy said.

“For us, it’s a cheese and ham sandwich, a bag of crisps and a drink. It’s not much for us, but for the parents that are struggling it’s just not having to worry about that.

“It’s taking that burden off a little bit.” The Greystones was traditionally a live music venue, but social distancing has all but ended live shows and the venue has had to operate as a community pub instead.

“The response we’ve got since we reopened [over the summer] has been great,” Mr Duffy said.

He also praised Rashford, saying he felt “really proud” of what the footballer is doing, which is “showing the best in people”. 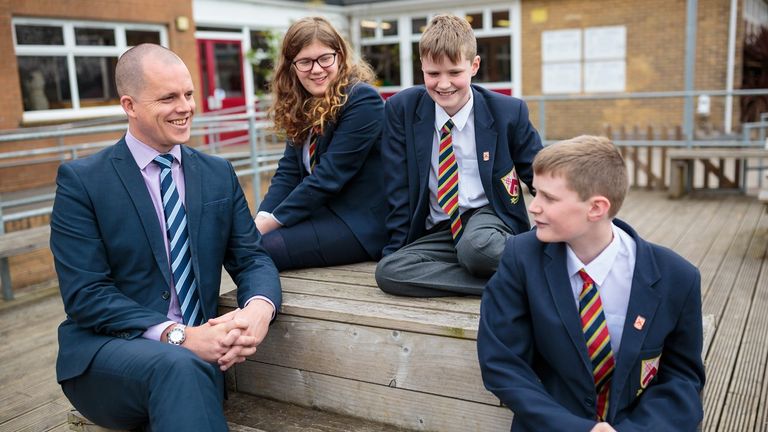 Headteacher Gregg Morrison said he “didn’t get much sleep” after hearing that MPs had voted to reject the extension of free school meals.

He felt it was “totally unfair” to the roughly 18% of students at his school who are eligible for the meals.

“The government ask us to talk about and teach directly British values – compassion and looking after people,” Mr Morrison said.

“They haven’t displayed that and it’s been left to people in local communities to fill the gaps.” Preston School is providing food vouchers to eligible students over the half-term, and has already been supporting struggling families during the lockdown.

“It hurts, it feels a bit more raw than it would have done otherwise,” Mr Morrison added. “Knowing the circumstances of those families makes it even harder.”

The headteacher said he had some opposition from a local politician who thought the move was politically-motivated, but he said: “It’s absolutely not – it’s so we have people fed and continue to get fed during school holidays.”