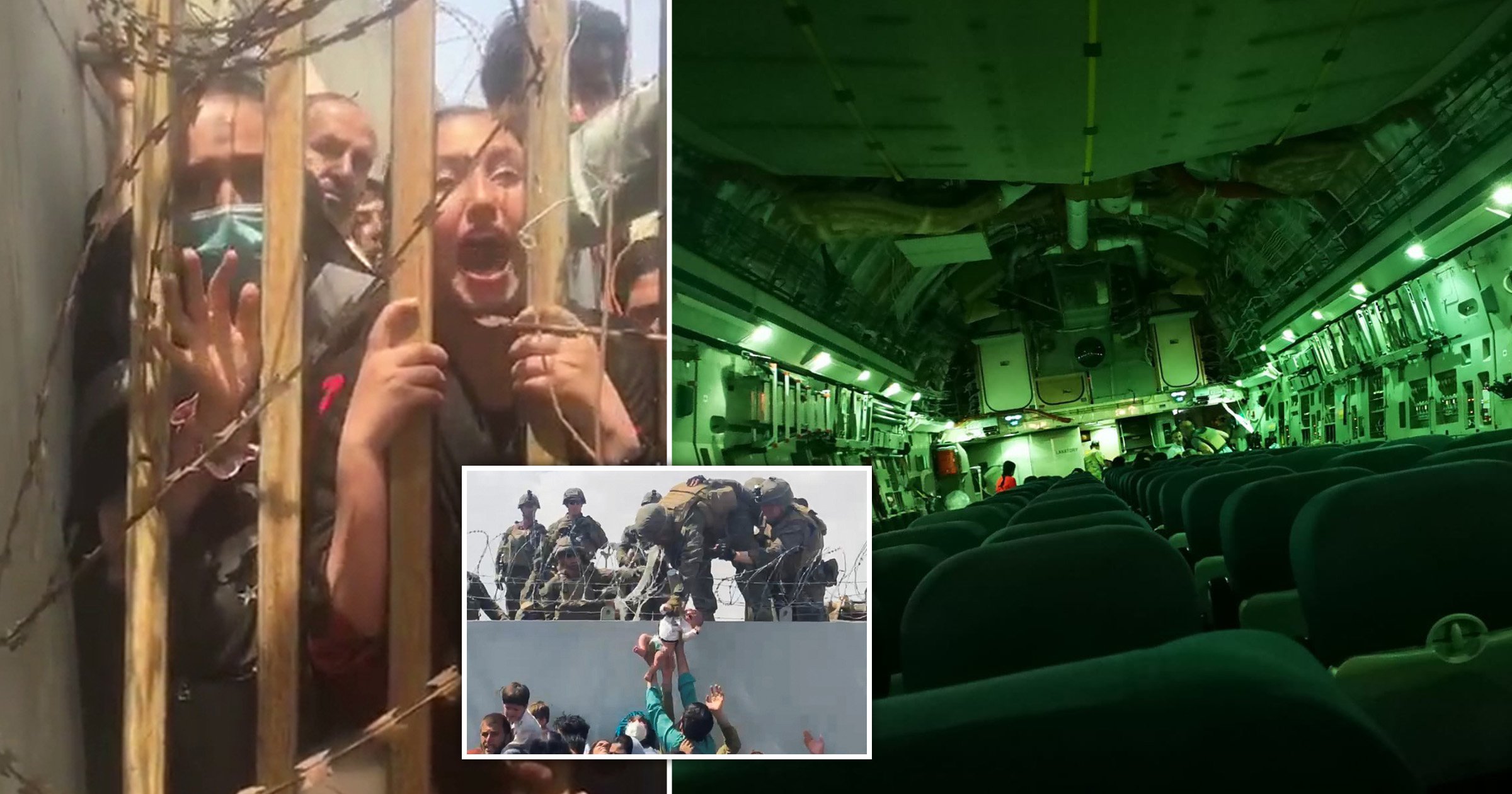 An ex-Royal Marine claims his wife left Afghanistan on an almost empty plane because people desperate to escape can’t reach the airport.

There have been chaotic scenes around the last route out of Kabul as Western forces fight to retain control of the staging ground for a hastily arranged evacuation effort.

The UK alone is attempting to airlift 4,000 British nationals, as well as many more eligible Afghans, and huge crowds are willing to risk their lives for a seat on a plane.

But one aircraft taking part in the rescue mission apparently left with dozens of spare spaces because people can’t make it past Taliban roadblocks to reach Hamid Karzai International Airport.

The image, which was shared by charity leader Paul ‘Pen’ Farthing, was taken by his wife of the inside of a Norwegian plane, he claims.

He posted on Twitter: ‘Kaisa is on her way home! BUT this aircraft is empty…scandalous as thousands wait outside #Kabul airport being crushed as they cannot get in Sadly people will be left behind when this mission is over as we CANNOT get it right.’

Mr Farthing told Sky News he and his wife decided to head to Kabul airport at night in order to avoid the crowds of ‘at least a couple of thousand’ people that descend upon the airport each day.

He said: ‘Going at night obviously has its own hazards – it was the choice of two evils and thankfully it paid off.’

Mr Farthing has vowed not to leave the country until the 25 members of staff working for his animal welfare charity Nowzad are safe.

He told Sky News flights were taking off ‘regardless of whether they’re full or not’, adding: ‘We are going to leave people behind, that is an absolute given’.

Defence secretary Ben Wallace has previously said ‘every space possible’ on British planes is being utilised, with any extra capacity being offered to allies.

Mr Wallace told Times Radio on Thursday: ‘Our people are getting through, we haven’t sent a single empty plane home. And I don’t think many other nations have.

‘I can’t speak for other nations, obviously, but fundamentally the key here is when we have a plane, if we have a single empty seat, we will offer it to other nations.’

Earlier in the week, he conceded ‘there will be some people left behind, we made that clear in the last few weeks, I’m not going to raise expectations’.

Armed Forces minister James Heappey has confirmed 963 people have been evacuated by the UK in the latest 24-hour period.

The British ambassador to Afghanistan Sir Laurie Bristow has said Foreign Office personnel hope to get ‘at least’ 1,000 people out of the country every day – but warned there were ‘days, not weeks’ left to complete the mission.

US President Joe Biden has committed to keeping US troops at the airport until the evacuation is complete, even if it runs past the August 31 timetable for withdrawal.

Around 700 British forces are on the ground helping to secure the airstrip and will remain there ‘as long as the United States forces are running the airport’, the defence secretary confirmed.

A government spokesperson said: ‘Departments across Whitehall have been working intensively at all levels in the last few days and weeks on the situation in Afghanistan.

‘Thanks to these efforts, we have relocated over 2,000 Afghans to the UK since June, evacuated over 400 British nationals and their families on RAF flights since Sunday and established one of the most generous asylum schemes in British history.’

Worst excuses given to police for breaking lockdown rules

School closures: Pupils to remain at home for MONTHS as Boris urged to form ‘exit plan’