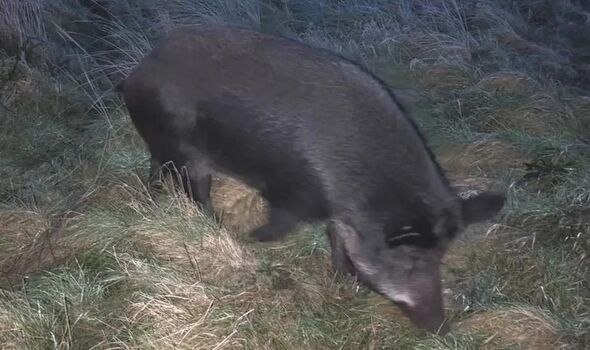 Three porcine interlopers have been on the loose around Silloth in Cumbria for weeks, residents said. Some said they were frightened after being “confronted” in the dark by the animals.

One resident, Adam Pearson said he saw the roaming animals near Skinburness Road and they “weren’t aggressive, they were just getting on with what they were doing”.

But he added “any animal like that, that’s provoked, obviously will and can turn”.

They were “big animals”, he said.

The pigs are believed to have escaped from farmland near Solway Holiday Park, which was recently sold.

The new owners said the land still belonged to the park’s previous owner, Sam Hagen, and it had passed on residents’ concerns.

Mr Hagen has been approached for comment by the BBC.

Carole Blake said she bumped into the roving swine on an early morning dog walk.

“I had three pigs walking towards me in the black dark,” she said.

“I managed to move a bit faster than the pigs and they just carried on heading into Silloth – they were just strolling along, quite happy.”

Ms Blake said she believed the animals were being rehomed after the holiday village was sold but they were still in pens on the farmland.

“They keep breaking out of the pen and walking round Silloth,” she said.

She was “worried about their welfare” and had contacted Cumbria Police, she added.

The force said it had been informed on Tuesday the animals had been contained and police were not required.

Meghan and Harry accused of ‘having own agenda’