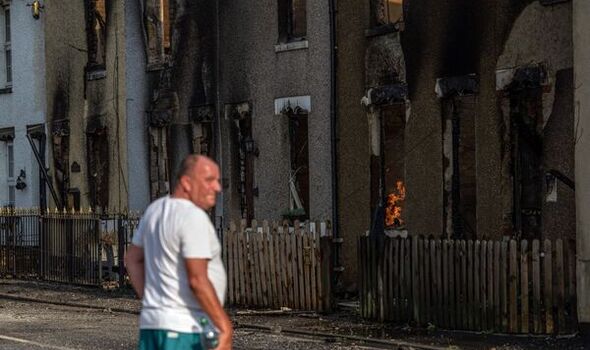 But yesterday the “Spanish Surge” heatwave brought similar scenes to areas of England and Wales.

Some 100 firefighters tackled a blaze in the village of Wennington, east London, as images showed smoke billowing into the air with buildings and fields alight. Lorry driver Gary Rouel, 64, told of his heartbreak after his home “went up in flames” just two months after he had paid off the mortgage.

He had raced back from work after his dinner lady wife Debbie, 64, called him to reveal flames were lapping at their conservatory. She desperately tried to round up the couple’s three cats and one dog as firefighters evacuated her.

Gary said: “We were told it was a compost fire that started it – but we don’t know. It’s terrible. We’ve got insurance but nothing will ever be the same again.”

The fire is believed to have started in grassland before spreading to nearby buildings close to a fire station.

Lynn Sabberton, who was also evacuated with her partner from her nearby home, said: “We thought it was one of the fields that caught alight over the back of us. A neighbour said, “The green has caught fire.” It was really spreading so quickly.”

Train operator c2c said the line between Ockendon and Upminster in Essex had to close because of the blaze.

The London Fire Brigade admitted it was battling “several significant” incidents as people have been urged not to have barbecues or bonfires due to the “unprecedented” challenges crews face.

Some 12 engines were sent to tackle a blaze on heathland at Dartford, Kent, with a brigade spokesman saying: “Crews are using hose-reel jets and main jets on undergrowth and trees. No casualties have been reported.”

A few miles away, a hectare of corn was destroyed. Elsewhere in the south, 200 firefighters were dealing with a grass fire in Upminster and 12 fire crews tackled a garden fencing and trees blaze in Pinner, north west London.

There was a restaurant fire in Southgate, north London, plus grass fires at Croydon, south London, and at Dagenham, east London.

There were also heatwaverelated call-outs to Wembley, Hendon and Eltham in the capital. But it was not just the south of England ablaze. Plumes of smoke were seen after fire engulfed land near to New Brighton Waterfront in Merseyside.

And one blaze at Lickey Hills Country Park, near Birmingham, covered 65,000sq yds and forced 15 people to flee their homes. Essex firefighters said they had three times their average number of calls.

The Dorset and Wiltshire brigade mobilised crews to fight “multiple seats of fire” in fields at Winterbourne Stoke, near Stonehenge. In Leicestershire, crews were stretched as they battled a large grass fire near Bradgate Park in Charnwood Forest.

Other incidents within the region forced the East Midlands’ brigade to also declare a major incident.

Home Secretary Priti Patel paid tribute to the 999 services, adding: “I urge the public to follow all safety advice from their fire service and stay safe.”