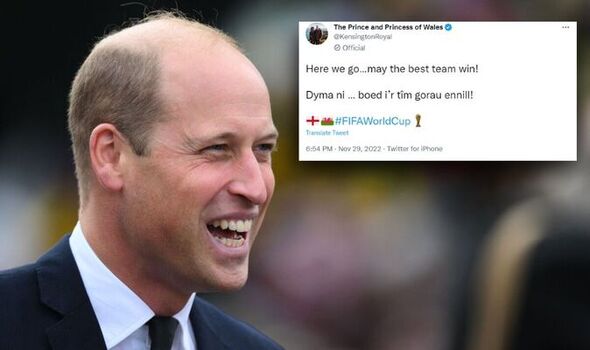 Prince William stayed on the fence as he shared support for both England and Wales football teams as they kicked off their World Cup match this evening.

The Prince tweeted, first in English and then in Welsh: “Here we go…may the best team win!

The message was accompanied by the flags for both countries.

A royal expert told Express.co.uk that William was “between a rock and a hard place” regarding his support, given his position as both the longstanding head of England’s Football Association, and with the newly-acquired title of Prince of Wales.

Angry Welsh fans, some of whom support their nation’s independence, condemned William for favouring their rivals after he gave England their shirt numbers ahead of the World Cup kicking off.

William responded at the time that he intends to cheer on both teams but won’t drop his allegiance as he wants to remain authentic, despite his royal title.

The Prince has spent many years as head of the Football Association in England.

But following the Queen’s death and Charles’ accession to the throne, William took on the additional role of Prince of Wales.

King Charles, who was the longest-serving Prince of Wales, added he had “been so greatly privileged” to bear the title for more than 60 years.

However, Royal Family branding expert, Professor Pauline Maclaran of Royal Holloway, University of London, told Express.co.uk: “Prince William is stuck between a rock and a hard place in relation to his support of either team tonight and he will have to navigate it very carefully.

“He has supported England all his life, so would be deemed hypocritical if he changed his allegiance now.

“And, of course, he is unlikely to do so in his role as president of the FA since 2006, never mind his own enthusiasm for the sport!”

Prince William met England’s 26 players and England manager Gareth Southgate before they boarded their flight to Qatar in a private meeting at St George’s Park in Burton upon Trent – a move which quickly garnered criticism from Welsh actor Michael Sheen, who described the meeting as “entirely inappropriate.”

The following day, the Prince of Wales said he needed to “play carefully” with his “affiliations”, and that he was “supporting both” teams.

During a visit to Cardiff’s Senedd chamber, he remarked: “I’m telling everyone I’m supporting both, definitely. I can’t lose. I’ve supported England since I’ve been quite small, but I support Welsh rugby and that’s my kind of way of doing it.

The Prince added that he “happily” places his allegiance with Wales over England when it comes to rugby.

One possible way out of his dilemma is presented by Kate, who has been tipped to take over as patron of the Football Association of Wales.