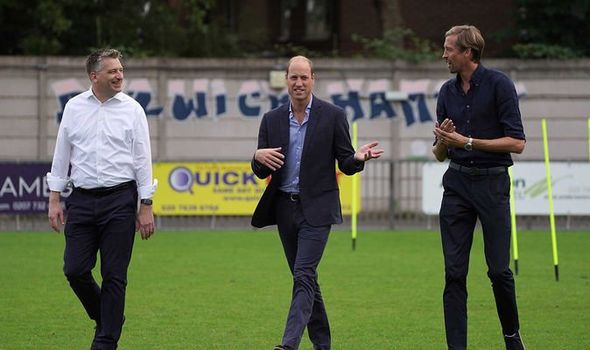 William, who is president of the Football Association, went to non-league Dulwich Hamlet FC to discuss a review of how clubs function and meet supporter representatives.

Joining him was MP and former sports minister Tracey Crouch, who is chairing the review, and former England star Peter Crouch, no relation to the MP, who is director of football at the club in south-east London.

Dulwich Hamlet FC is the highest attended non-league club never to have reached the Football League. Its crowds average around 2,400 on a Saturday, and around two-thirds of the club’s shares are owned by individual fans, with the rest by a supporters’ trust, allowing the club to meet running costs using matchday revenue.

When Ms Crouch told him some clubs treat supporters with disdain and disrespect, Aston Villa fan William asked: “Is that also why you can’t necessarily run a football club like a business? Because you then miss the point of that heart and soul and fabric of what a club is, if you’re working to the bottom line that the finances drive everything?”

William, 39, also asked coaches and managers at Dulwich Hamlet: “What’s the best practice [here] that can be replicated elsewhere?”

Told about how Dulwich Hamlet FC has kept prices low, William joked: “Crouchy will do a half-time dance!”

The duke also asked fan representatives from several clubs: “Where do you feel we are on a scale of fans being listened to by clubs?”

Ms Crouch’s fan-led review, announced in April, was prompted by the ill-fated plot earlier this year to encourage England’s current six biggest clubs to join a league that would have destroyed the finances of countless other clubs.

She is due to publish a report this autumn but interim findings called for an independent regulator with powers to block any future breakaway league.

She also outlined plans to give fans a “golden share”, with a veto over the sale of stadiums and changes to a side’s name, badge and kit colours.