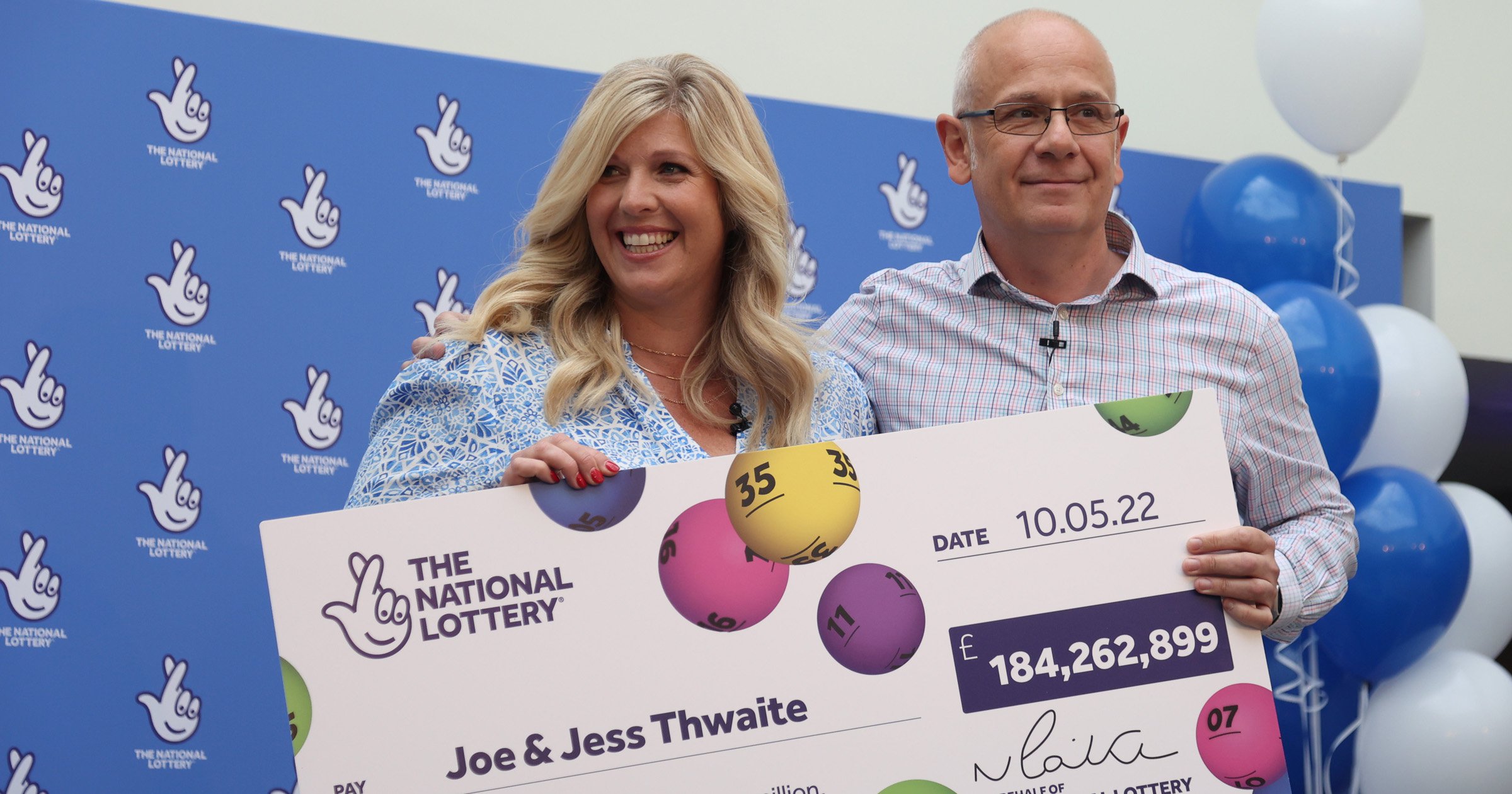 The Gloucestershire couple who won the biggest-ever EuroMillions jackpot has been revealed.

Joe, 49, a communications sales engineer, and Jess Thwaite, 44, the business manager of a hairdressing salon, are the lucky pair of Britons who won an eye-watering £184 million.

The couple say the phenomenal win ‘gives us time to dream which we haven’t had before’.

Their winning EuroMillions Lucky Dip ticket was bought by Joe on The National Lottery App at around 4pm on the day of the May 10 draw.

They had no idea they had won until Joe woke up at 5.15am the next morning to sort out their dogs – and received an email saying ‘Good news, you’ve won a prize’.

Showing extreme self control, Joe didn’t wake up his wife to share the news after seeing the nine-figure prize.

‘I saw how much and I didn’t know what to do’, he said. ‘I couldn’t go back to sleep, I didn’t want to wake Jess up so I just laid there for what seemed like forever.

‘I spent some time searching for property with no budget limit, which was a novelty!’

When the alarm finally rang, Joe turned to Jess and said: ‘I’ve got a secret, I’ve got something to tell you.’

Hearing the news in disbelief, his wife thought he was joking, concluded that it wasn’t worth getting too excited about as it probably wasn’t true and got up to make a coffee.

But after going about their normal morning routine, the pair called Camelot when the phone line opened at 8am and were told they had just become the UK’s biggest-ever winners.

Jess said: ‘We’ve had one week to think about this and we now have time to share lots of experiences and go on adventures with our family and friends.’

She has joked that her late father who ‘constantly dreamed of winning the lottery’ prepared her for this day.

‘He would always ask us what we’d do when we won, how we’d spend it, who we’d treat’, she said.

‘It was a regular conversation and I feel like he was preparing us. Maybe that is why I seem so chilled, as I’ve kind of been ready to win for years.’

When Jess’ father passed away seven years ago, Joe took on the mantle of buying lottery tickets – but he always felt he was ‘not lucky enough’ to win big.

‘The family always ask me if I have a ticket for the big draws.  While I don’t play every week, I do a Lucky Dip when there is a big jackpot.  Although I don’t feel like I’ve had a lot of luck in the past’, he said.

Jess added: ‘Plenty of times Joe has said to me that he’s not lucky enough and I should do it.  I’m so glad he carried on, and while my dad had prepared me, I’m not sure anyone is really prepared for a win like this.’

The couple have stayed anonymous but chose to reveal their identities at a hotel in Cheltenham this morning.

Before now, the biggest-ever winner was an unnamed ticket holder who scored a staggering £170 million in October 2019.

Saying ‘history has been made’, he added that lottery bosses were ‘ecstatic’.

‘Our focus now is on supporting the ticket-holder through the process and helping them start to enjoy their truly life-changing and record-breaking win’, he said.