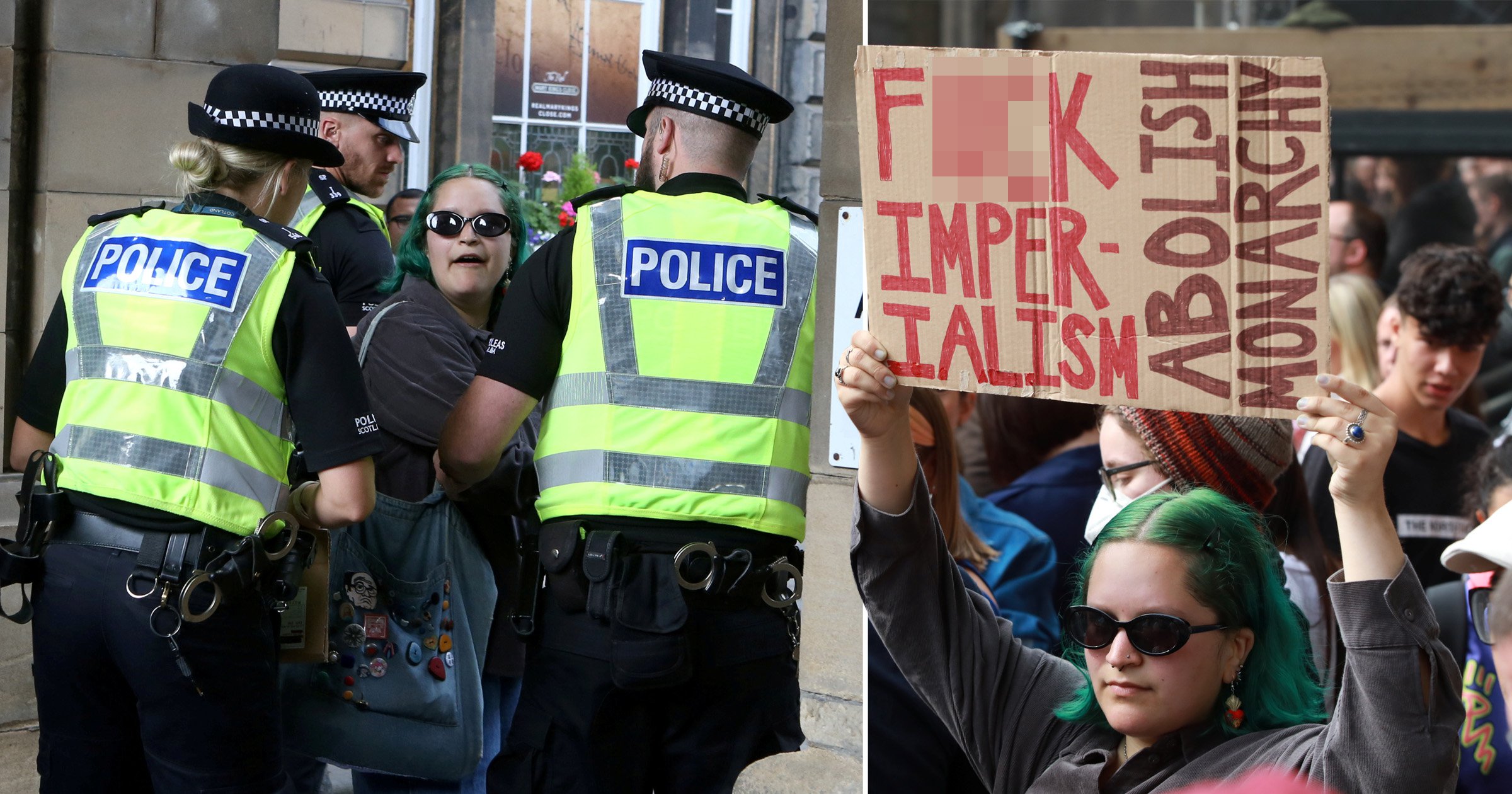 A woman was arrested holding an anti-monarchy sign in Edinburgh today, before the Queen’s cortege arrived in the city.

She was detained outside St Giles’ Cathedral, where the monarch’s coffin is due to be held from tomorrow after spending the night at the Palace of
Holyroodhouse.

Moments before the proclamation of Charles III as new king this afternoon, a demonstrator appeared in the crowd opposite the Mercat Cross.

Officers appeared behind her and took her away, prompting the crowd to applaud.

One man shouted: ‘Let her go, it’s free speech,’ while others yelled: ‘Have some respect.’

A police spokesman said a 22-year-old woman was arrested ‘in connection with a breach of the peace’.

It came on the day thousands lined the streets to watch the Queen’s coffin arrive in Edinburgh, where she will stay before continuing the journey to her final resting place.

Countless tearful well-wishers turned out to pay their respects to the late monarch as her hearse made the 175-mile journey from Balmoral.

But some hecklers were heard booing among the crowds gathered in Scotland’s capital to hear the proclamation of Charles.

The Lord Lyon King of Arms gave a speech before declaring ‘God save the King’, which the crowd repeated.

One man was heard booing throughout the cheers.

The national anthem was then sung but, afterwards, people could be heard calling for a republic.

Some mourners called the hecklers ‘disrespectful’, saying they should have avoided the proclamation if they believe in a republic.

Helen Smith, 48, from Livingston, said: ‘I believe everyone does have a right to protest, but I thought it was the wrong place at the wrong time.

‘(It was) incredibly disrespectful to the event that we were just seeing.’

Ms Smith, an engineer, she feels it dampened the event for the rest of the crowd.

‘We saw the police keeping an eye on things behind us, and we thought something was going to kick off, and it did,’ she said.

‘We just felt disappointed because the eyes of the world are on us at the moment.

‘It’s a massive moment in history. We’ve had the death of the longest-serving monarch we’ve ever had, we’ve got the new King being proclaimed, and then we have the heckling at the back and the shouting.’

Ann Hamilton, 48, said she thought the interruptions were ‘terrible’.

Ms Hamilton, who travelled from Dumfries, said: ‘There’s tens of thousands of people here today to show their respect.

‘For them to be here, heckling through things, I think it was terrible. If they were so against it, they shouldn’t have come.

‘Once everyone was singing God Save The King with their full voices, it was drowning them out.’

Donald Maclaren, 64, of Livingston, added: ‘It’s very disrespectful. There is a time and a place if you want to protest, but this isn’t it.

‘Somebody shouted, “Republic now”. Then, when they were doing the three cheers, somebody was booing.’

Liz Maclaren, 67, also branded it ‘disrespectful’, saying: ‘The boos sounded like one person.’