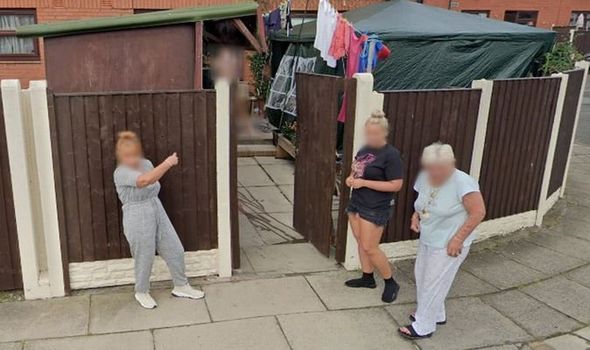 An anonymous woman in the Dingle area of Liverpool cheekily lifted up her top and flashed her breasts as a Google Maps camera car passed her. She can be seen stood on a doorstep through an open gate leading into a back garden.

Three other women can also be seen standing at the other side of the fence as the car drives by.

Just before the image was captured, the three women standing outside the fence appear to be waiting for the Google Maps car to go past so the moment can be caught on camera at the right time.

Another image shows one woman wearing a grey jumpsuit and trainers pointing towards the woman as she flashes.

A different angle, which is understood to be captured after the bold snapshot, shows the three women outside the fence talking amongst one another.

Cars used by Google are fitted with mounted cameras that enable 360 degree pictures to be taken for use in Google Maps.

The cameras take a number of photos as well as capturing GPS data to match each photograph to its location.

Pictures from each camera overlap and special software then ‘stitches’ them together to form a map.

The car also has three lasers which reflect off buildings and other objects and help Google to create 3D models for their maps.

Princess Beatrice snub: Title to be made EXTINCT instead of going to Bea