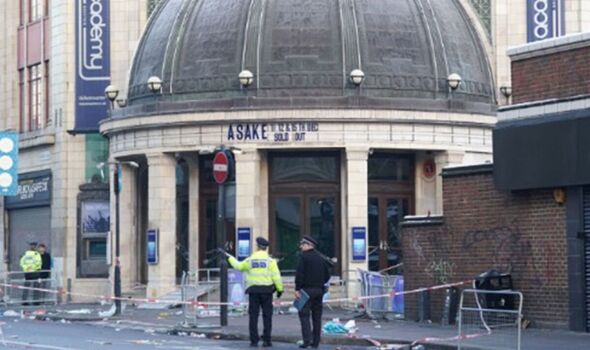 Rebecca Ikumelo, 33 died in hospital on Saturday morning from her injuries sustained at an incident at the O2 Brixton Academy on Thursday during a concern by Afro-pop singer Asake. Metropolitan Police confirmed the death and that two other women, aged 21 and 23 remain in critical condition. The concert was abandoned part was through after a “large number of people” tried to force their way inside.

Speaking at the scene yesterday Chief Superintendent Colin Wingrove, policing commander for Lambeth and Southwark extended sympathies to those affected.

Video footage shared on social media showed crows stretching around the venue ahead of the concert.

Superindentent Wingrove said: “Having seen some of the really upsetting images on social media our thoughts are with them.

“An urgent investigation is currently under way led by detectives from our Specialist Crime Command and cordons remain in place as officers continue to work at the scene. This is still a fast moving and evolving picture and we are working to establish the events that led up to the incident.

“We are also aware of a vast amount of footage on social media and of course this will be examined as part of the investigation along with footage from officers’ body worn video cameras.”

Scotland Yard previously said a woman was arrested for assaulting an officer over the incident and investigators were looking at footage on social media and from body worn cameras.

“We are working incredibly closely with our partners and community members and would like to thank them for their support so far in the investigation,” Mr Wingrove said.

“We would also like to thank people for coming forward with information.

“We have set up an online page for the submission of photos and videos.

“There were around 4,000 potential witnesses present at the time of this incident and we want to urge any members of the public with information to come forward.

“We need your information as we try to establish what happened as quickly as we can.”