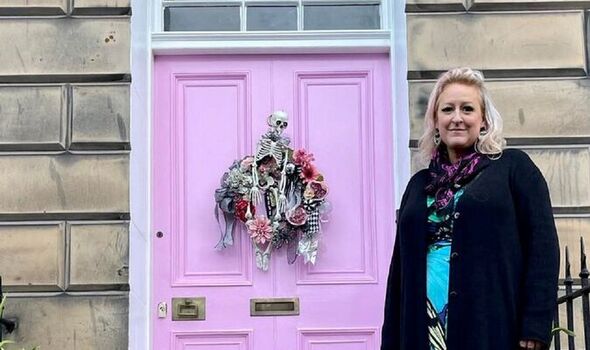 A woman faces a £20,000 fine after painting her front door pink in New Town, Edinburgh. Miranda Dickson, 48, had the front door of her Georgian home professionally painted with Dulux paint in a vibrant, bright pink colour last year, as part of a renovation. The mum-of-two now faces a fine from the council and she blasted the rules claiming they “were 30 years out of date”.

Miranda inherited her parents’ home in 2019 and is managing the travel business they ran in the World Heritage conservation area. She believes the complaint over her door’s colour was malicious and “petty”.

She said her street, Drummond Place, is popping with brightly coloured front doors and compared it to Notting Hill or Bristol.

Miranda said: “There are cities in the UK like Bristol, Notting Hill and Harrogate which are brightly coloured. Coming home and seeing my front door gives me joy, I’m proud of it.

“It’s my house, I own it. It’s not like I wanted to build a glass box. Georgians loved pink – in that era all the windows were painted grey or black, and people had different-coloured front doors.

“I’ve had overwhelming support from people saying ‘it’s amazing’, and ‘it makes me smile’.”

Instagrammers are often snapping pictures of the pink front door, which has its own account on the site. But planners at the City of Edinburgh Council have objected to the colour and are now insisting it is painted white gloss.

She faces a £2,000 fine unless she removes the ‘unauthorised’ paint, and could be hit with a £20,000 fine if she is charged with an offence of breaching rules in the conservation area.

Miranda said the diktat is out of synch with the City of Edinburgh Council’s own planning rules which say doors should be ‘muted’.

She joked she could paint the door a rainbow of ‘muted’ colours, and slammed a ‘Farrow and Ball attitude’ towards heritage.

Miranda said: “I don’t want to paint it white, I’ll paint it dark red. People are saying ‘why don’t you paint it a rainbow of muted colours’.

“In a world where we are supposed to be open-minded and after all the stuff we’ve been through the past two years, I thought people would be more community-minded.

“They are saying they haven’t received any complaints about other brightly coloured doors in New Town and saying it should be an ‘appropriate’ colour. Appropriate to whom?

“Do we feel as a society that what was appropriate 30 years ago is appropriate to now? If I said it was sexist or anti-LGBT the council might back off.”

A City of Edinburgh Council spokesperson said: “The colour of the door is not in keeping with the historic character and appearance of this listed building in the New Town, part of our World Heritage Site.

“The owner agreed the door would be repainted but as this work has not been carried out we are taking enforcement action requiring them to repaint the door.”