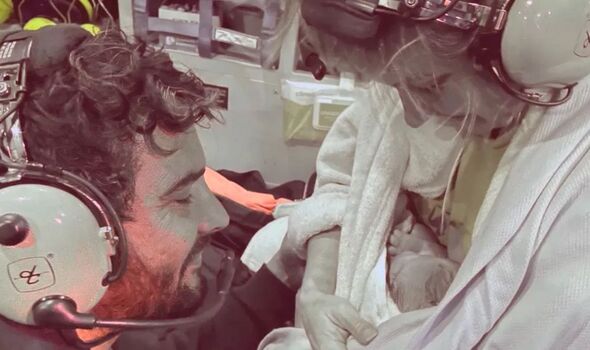 A woman has given birth on a rescue helicopter flying from the Isles of Scilly to Cornwall. Jennie Trevithick, 41, had originally attended the island’s birth centre with her partner, Hayden Simpson, 38, but the midwife discovered some meconium when her waters broke. In preparation for possible complications with the birth, Ms Trevithick was boarded onto a coastguard helicopter to fly to Royal Cornwall Hospital on December 5, but baby Ebbyn decided to make an appearance earlier than scheduled.

Ms Trevithick, from St Mary’s, the largest island in the Isles of Scilly, was also flown out to Cornwall during her first pregnancy.

She told the BBC: “In my first pregnancy, with my daughter, I was also flown out and when I found out the helicopter was on its way the contractions stopped and everything.

“But with this one, I could hear the helicopter getting closer but there was no sign of anything slowing down.”

Mothers from the Isles of Scilly are often flown by helicopter to larger hospitals if there is a possibility of complications with the birth as the remote islands do not have the appropriate medical facilities.

As she made the 55 mile journey by air, Ms Trevithick explained she realised her baby wasn’t going to wait until the crew landed at the hospital.

She said: “I knew we hadn’t landed yet and I reached down to feel the head and I was like ‘OK’.”

The birth progressed quickly in flight and adorable baby Ebbyn Josiah Trevithick Simpson was born at two in the morning.

Speaking of her experience, Ms Trevithick said: “I just felt so safe – I couldn’t have wished for anything more.”

Baby Ebbyn is not the first child to be born on a coastguard helicopter in-flight to Cornwall.

In 2018, 7lb 8oz baby Torran was born to Sandy MacDonald at 1,400ft as the helicopter flew over Penzance.

In 2013, Ella McLachlan went into labour on the Isles of Scilly, giving birth to a 5lb 3oz baby boy named Marcus on the helicopter about ten minutes before the crew were able to land.

Elsewhere, the Shetland Coastguard welcomed a baby boy back at 1,000ft in 2012 as the mother was flown from Unst, the northernmost inhabited island of the UK, to Lerwick.

Ms Trevithick has expressed her thanks to the helicopter crew and her midwife, who had travelled with her on board.

As the group landed at Royal Cornwall Hospital, Mr Simpson was able to cut the cord and mother and baby were assessed by doctors, with both found to be in good health.

Reflecting on the birth, Ms Trevithick said: “It was a surreal experience. I was holding the baby as we were landing and looked up and went ‘where are we? What is happening?”

She added: “Everyone said it must have been so scary being in a helicopter but actually I felt super safe – I was in the best place possible. I couldn’t have wished for anything more.”

Read next:
Student suspended after taking baby to lectures while breastfeeding
Rihanna shows off her son for the first time in adorable video
Mum with rare condition gives birth to world-first healthy baby
Nicola Adams on becoming a mum with her partner Ella Baig
Lidl, Tesco and Asda recall festive products ahead of Christmas