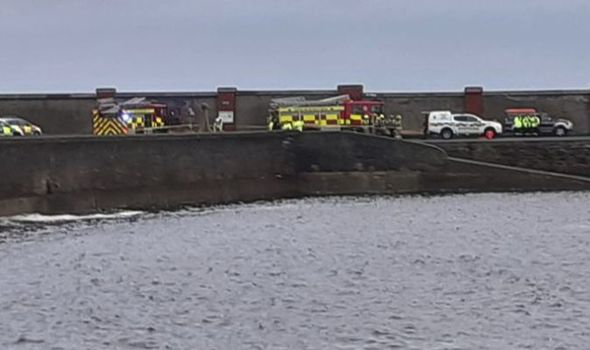 Officers hurried to the Harbour Street area of Saltcoats, on the Firth of Clyde, this morning following reports of a car in the water. Police, fire crews, and ambulance services were pictured at the scene the scene as a black car was found submerged.

The sole occupant of the vehicle was rescued by emergency services and has been taken to Crosshouse Hospital.

An investigation into the incident are ongoing.

A Police Scotland spokesperson told the Daily Record: “We received report of a car in the water in the Harbour Street area of Saltcoats around 8am on Friday, January 14.

“Emergency services attended and a woman, who was the sole occupant of the vehicle, has been taken to Crosshouse Hospital as a precaution.”

Saltcoats, in north Ayreshire, sits on the coast between Irvine and West Kilbride.

Ardrossan harbour is the terminus for ferries to and from the Isle of Arran and Campbeltown.

In February 2020, another driver crashed through the roadside barrier and drove into the sea in Largs, further up the coast.

Luckily, the driver survived the incident with minor injuries, police said at the time.

It came just a month after a car came off the road and plunged into the sea near Ormsary, killing a 37-year-old man and a 19-year-old woman.

The incident happened on January 26 that year on the B8024.

Shortly after, the two bodies were found nearby.