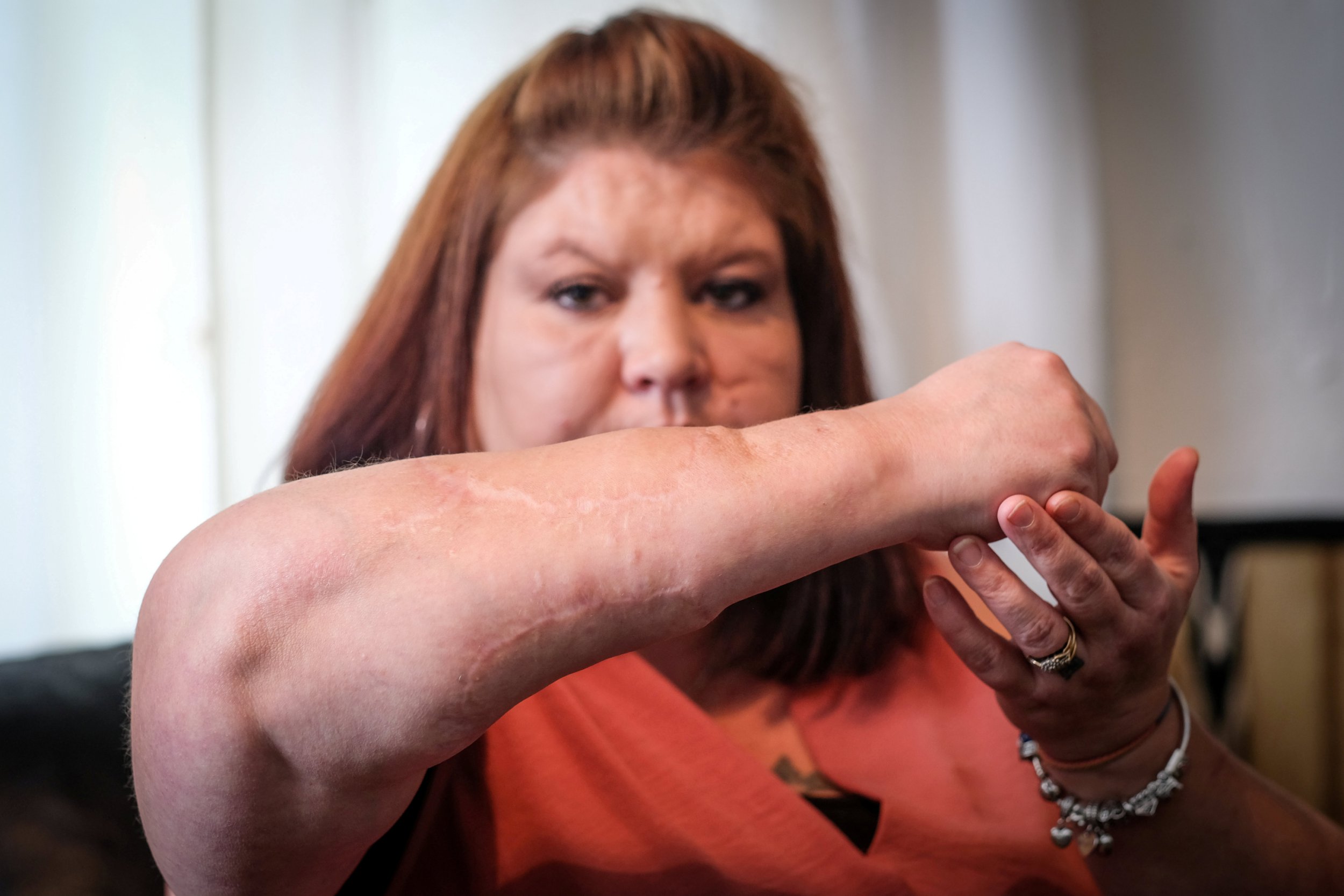 A woman who almost lost her arm after being attacked by a dog has called for tighter restrictions for owners.

Mum-of-two Rachel Anderson, 43, was babysitting for a friend in 2018 when their pet Husky, Storm, sunk its teeth into her face before savaging her arm in a brutal 45-minute attack.

The stay-at-home mum from Skegness was left with gaping wounds and needed nearly a dozen operations to repair her arm.

Four years on, Rachel’s wounds have now healed but she is still unable to use her hand properly and she says the psychological scars remain.

To this day, Rachel says she ‘cries from fear’ whenever she hears a dog growl and that she would like tighter regulations on dog owners.

In the wake of the death of a woman in Surrey, who was attacked by a pack of dogs last week, Rachel said she welcomes the suggestion dog owners should have licences.

Rachel, a stay-at-home mum, from Lincoln, Lincolnshire, said: ‘I believe dog attacks are down to the owners, not the dogs. It’s down to the environment they live in.

‘Dog licences would make the country safer for everyone – it would stop people having too many or having them for the wrong reasons.

‘Dog licences will make sure people who shouldn’t have dogs, don’t have them.

‘What’s stopping that woman who owned the dog that attacked me from going and buying another puppy?’

Rachel, who lives with husband Wayne Anderson, 46, had been looking after her friend’s two children on December 26, 2018, when she was attacked.

Her friend’s Siberian Husky, which she said would normally be kept outside, locked its jaws on Rachel’s face before biting her arm.

‘I remember it dragging me side to side, by the arm. At one stage I thought it was going to release me, but it was treating me like a chew toy.’

It was only when one of the children stabbed the hound with a knife on the counter, she was able to get free – and call police who shot the dog dead, she claims.

Her limb was saved when medics sewed it inside her stomach for four weeks to get new skin to grow back.

Although Rachel’s physical wounds have now healed, the damage done to her arm means she’ll likely never return to hairdressing.

She said: ‘I never take my own dog to the park in case other dogs come over and want to play. Whenever I hear a growl, I start to cry.’

People are calling for a system of licensing for dog owners being re-introduced in the UK in the wake of reports of a dog attack in Caterham, Surrey, where a woman, 28, died in hospital and another woman was injured.

Rachel said: ‘That woman who died the other night, I would dread to think what was going through her brain as she was being attacked.’

Rachel says she is in favour of a licensing system, which has not been seen for dog owners in the UK since 1987, when they were abolished.

She reckons that ‘most dogs don’t naturally want to attack – it’s either what they’re shown to do, or they don’t know any better.’

‘I don’t believe it is down to the dog, it is down to owners. If treated right, any breed can be good. It’s the owners, and the environment it is in.’

Rachel feels a licensing system would allow this to be better monitored and for owners to be held accountable for their dogs’ actions.

Jacob Rees-Mogg to TEAM UP with Nigel Farage to deliver Brexit – ‘Better you than Corbyn!’

‘It was a British vote!’ DUP’s Foster takes swipe at ‘anti-democratic’ Scottish Remainers