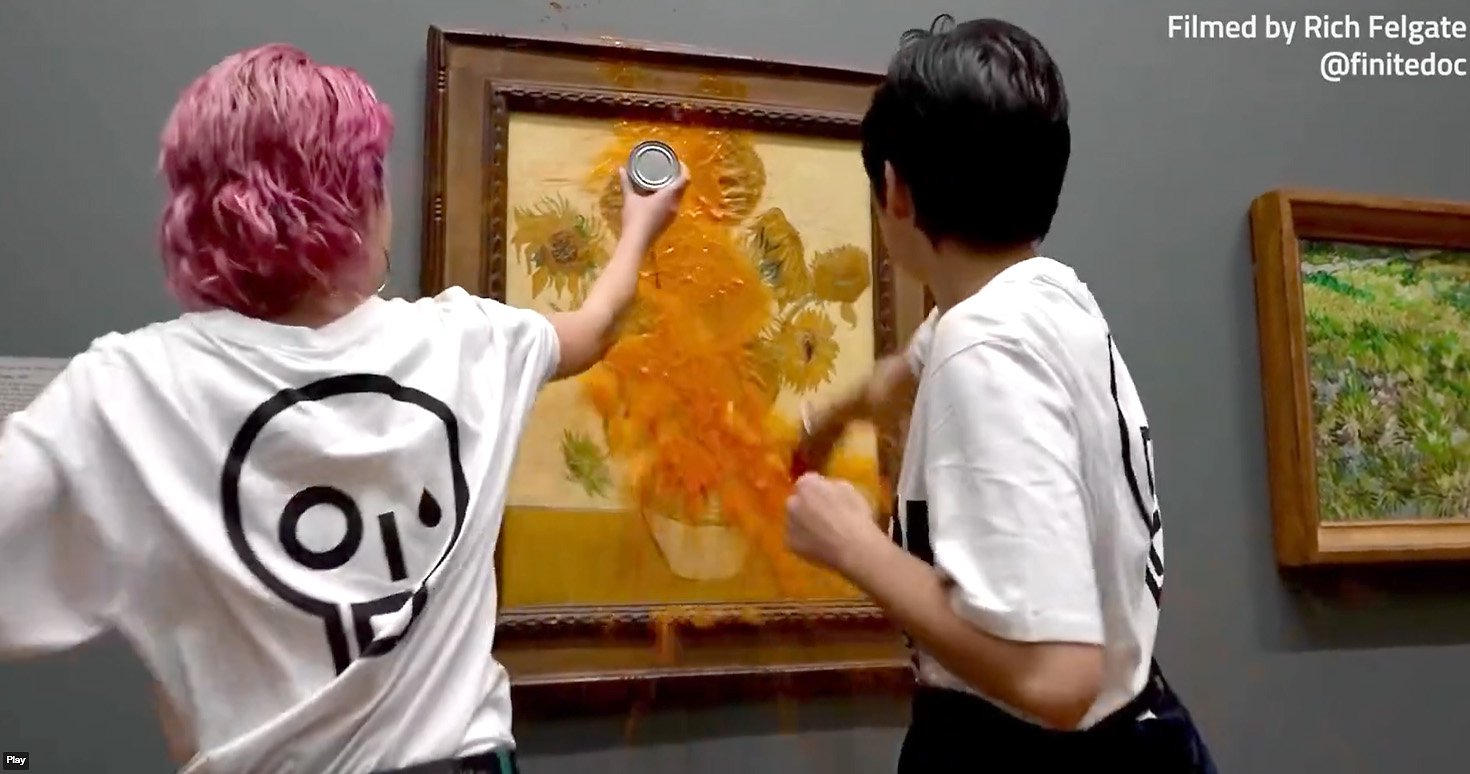 One of the eco-protesters who hurled tomato soup at Sunflowers said she would never have done it if she thought it would be damaged.

Phoebe Plummer, 21, glued herself to the wall of the National Gallery after carrying out the stunt with Anna Holland, 20, on Friday.

Photos of the priceless painting covered in soup went viral, with fury from around the world directed at them.

But defending her actions, Plummer said she knew that the artwork was covered by protective glass and that the canvas itself would not be touched.

She said people might be angry, but that the important thing is that they were now talking about it – and the reason behind it, which is her anger at continued support for fossil fuels.

Both protesters wore ‘Just Stop Oil’ t-shirts, and Phoebe said that over 50 million people had now viewed a video of what they did while shouting ‘Are you more concerned about the protection of a painting or the protection of our planet and people?’

Speaking to Free Seed News while holding another can of Heinz soup, she said: ‘I want to make one thing perfectly clear. We did no damage to the painting whatsoever.

‘I was in court yesterday and heard that there has been “minimal damage” done to the frame, which is repairable and replaceable.

‘It was behind glass and we never, ever would have considered doing it if we didn’t know that we wouldn’t do any damage.

‘We were literally sat there glued to the wall – they wiped it off with a bit of kitchen roll’.

She appeared at Westminster Magistrates’ Court court on Saturday morning charged with criminal damage to the frame of the painting.

Plummer, from Lambeth, and Holland, from Newcastle, both pleaded not guilty.

Prosecutor Ola Oyedepo said the pair threw the ‘orange substance’ knowing there was a ‘protective case’ over the actual painting, though damage was caused to the frame.

She said it is unclear at this stage what the value of the damage is but said it is ‘significantly below the £5,000 cost threshold’.

Speaking after the hearing, Plummer said she realised it was a ‘ridiculous’ action but said what she really wanted to get into the media was questions like why Liz Truss was planning to award over 100 new North Sea oil and gas licenses.

And she asked: ‘It is okay that fossil fuels are subsidised 30 times more than renewables when offshore wind is currently nine times cheaper than fossil fuels?’

The future of humanity will be decided this decade, she said, defending ‘civil resistance’ as what has allowed her to live as a ‘queer woman’ able to vote, go to university and ‘hopefully someday marry the person I love’.

Comments under the video shared on TikTok were varied, with plenty of people expressing support.

‘Gotta give it to her she’s got people listening,’ one user said, while another added: ‘The idea worked and she’s not wrong’.

One said: ‘Agree but she still wasted the soup could have just sharpied the glass’.

But one added: ‘This girl will be forgotten – Van Gogh is immortal’.

Katie McFadden, defending, told the court: ‘The prosecution needs to prove that damage has been caused.’

She said the ‘extent of the damage would be relevant to the proportionality assessment’ in weighing up their right to expression.

Plummer and Holland were released on bail on the condition they do not enter galleries or museums and do not have paint or adhesive substances in a public place.

Their trial was set for December 13 at City of London Magistrates’ Court.