LONDON — For weeks, the harrowing anonymous testimonies have poured in, one after another.

On a platform called Everyone’s Invited, thousands of young women and girls in Britain have recently been sharing frank accounts of sexual violence, sexism and misogyny during their time as students — accusations of everything including criminal sexual attacks to coercive encounters to verbal harassment to unwanted touching — offering raw and unfiltered discussions of their personal trauma.

But when taken together, the accusations paint a troubling picture of widespread sexual violence by students both within the school walls and outside, particularly at parties. In addition to reports of violence, the accounts also included claims of sexism and misogyny.

“This is a real problem,” said Soma Sara, the 22-year-old Londoner who founded Everyone’s Invited. “Rape culture is real.”

The powerful testimonies, while heart breaking and often infuriating, are unfiltered and remain unconfirmed. But they have nevertheless exploded into a national examination of sexual violence in schools, highlighting what accusers call a toxic culture of shame, silencing and victim blaming that they say school officials have done little or nothing to combat. And it comes amid a broader reckoning in Britain after the killing of Sarah Everard, whose abduction from a London street in early March set off a national conversation about violence women face.

Schools, local and national officials have begun investigations. On Wednesday, the government tasked an education body with conducting an immediate review of safeguarding policies in both public and private schools.

Simon Bailey, the National Police Chiefs’ Council leader for child protection, told the BBC on Monday, “We have a real problem here.”

A helpline will be launched on Thursday, and criminal allegations investigated, the Department of Education said. London’s Metropolitan Police encouraged victims to report crimes to the authorities.

While the accounts omit the names of both victims and perpetrators, they identify the schools the students attended, whether the alleged assaults took place on school grounds or elsewhere. Some were prestigious private schools that soon made headlines.

Current and former students at elite institutions — including Dulwich College, King’s College School, Highgate School, Latymer Upper School and more — have now written open letters to school leaders by name, detailing a culture of silence and victim blaming. In one instance, a former student said she was discouraged from taking legal action in a sexual assault case. In another, girls described being groped in a school hallway.

King’s College School and Highgate School issued statements saying they have begun independent reviews of the accusations and school policies, and Latymer Upper School said it had encouraged students to come to school authorities directly. Some of the schools named did not respond directly to requests for comment, but in local news reports similarly said they were taking the matter seriously and investigating in some cases.

Accusations of sexual abuse are not the province only of elite prep schools. Dozens of schools, universities and state-run schools have been named, though testimonies received after March 23 no longer identify the institutions. The thousands of stories speak to a pervasive problem facing young women and girls, Ms. Sara said, adding she hoped the focus on certain prominent schools would not distract attention from the bigger issues.

“If we point the finger at a person, at a place, at a demographic, you’re actually making it seem like these cases are rare or just anomalies, when really, they’re not rare,” she said. 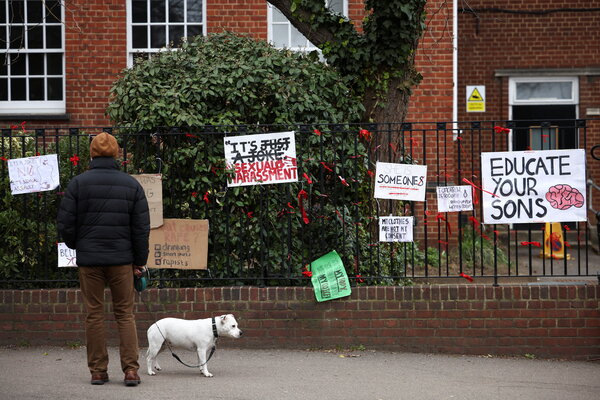 Experts agree that the accounts, while troubling, are part of a long overdue conversation about attitudes and behavior around gender and sexuality at institutions that have the effect of normalizing and trivializing sexual violence, or rape culture.

Aisha K. Gill, a professor of criminology at the University of Roehampton in London and an expert on violence against women and girls, said that the “tsunami of disclosures” highlighted a need for change and for accountability, and that it was “unreasonable to say it’s just happening in private schools.”

But she stressed that schools have to examine every accusation to determine whether a criminal act took place and whether it was addressed.

The schools themselves “have a duty of care in terms of their function, and there’s a duty there to safeguard and promote the welfare of all pupils,” she said. “So something is going badly wrong.”

The killing of Ms. Everard became a symbol of all the women who have been attacked but whose cases have gone largely unnoticed. Much of the discussion revolved around shifting the focus from women needing to protect themselves to the responsibility of the police, institutions and men to collectively to bear the burden of ensuring safety.

It was against this backdrop that Ms. Sara posed a question this month on the Everyone’s Invited Instagram account and website she started last year, as she grappled with her own experiences of sexual violence while a student.

She asked if others had experienced sexual violence during their school years or knew someone who had. Nearly every respondent said yes.

While the accounts vary, and are anonymous and unverified, the sheer numbers — more than 11,500 and counting — could not easily be ignored. When she shared the accounts, Ms. Sara withheld the names of the victims and the accused, but not the schools they attended.

“We did feel that an important place where rape culture is pervasive is in schools, and we felt all schools have a responsibility of safeguarding their children,” Ms. Sara said. “These are incredibly formative years.”

Many of the accusations “might not reach the threshold for criminality,” but were distressing nevertheless, Jess Phillips, a lawmaker from the opposition Labour Party, told the BBC this week. She said the onus was on the government to collect data about sexual violence in schools, saying it had failed to act on a recommendation to do just that after a 2016 inquiry.

“We need a better inspection regime, we need to have a proper inquiry, we need the government to actually be collecting the data — they’re not actually currently collecting this data anywhere,” Ms. Phillips said.

Gavin Williamson, the education secretary, said in a statement that the accusations were “shocking and abhorrent” and that they must be dealt with properly.

“While the majority of schools take their safeguarding responsibilities extremely seriously, I am determined to make sure the right resources and processes are in place across the education system to support any victims of abuse to come forward,” he said.

Government agencies and the police are in contact with Everyone’s Invited to provide support to those who are reporting abuse.

Sexual assaults and attempted sexual assaults often go unreported worldwide, so crime data can give only a partial picture of the scale of the problem. But in Britain other statistics show that sexual violence against school-age girls and young women is endemic.

Data released this month by Britain’s Office of National Statistics showed that women and girls aged 16 to 19 were the most common victims of sexual assault in England and Wales, followed by women aged 20 to 24. The statistics also show that Black people and people with mixed ethnicity in England and Wales were even more likely to be sexually assaulted.

A new survey from Plan International UK, a children’s charity, showed that 58 percent of girls ages 14 to 21 in Britain have been publicly sexually harassed in their learning environments.

Ms. Sara and other activists in Britain are not alone in using social media to call out sexual violence in school settings. In Australia, amid a broader national conversation about violence against women, Chanel Contos, 23, started an online petition in February that included thousands of testimonies of sexual violence among students.

The petition called for an overhaul of sex education with a holistic, early and consent-based approach and is being discussed in the Australian Parliament.

“The fact that two girls on opposite sides of the world, who didn’t know each other, experienced the exact same thing,” is telling, Ms. Contos said in an interview.

Dr. Gill, the criminology professor in London, pointed out that conversations about rape culture in institutions — or environments where attitudes or behavior about gender and sexuality have the effect of normalizing and trivializing sexual violence, like assault or rape — are not new. Successive waves of the feminist movement have called attention to it, she said.

But schools have a duty to safeguard students, she said, from creating safe spaces for victims of sexual violence to come forward to educating other students about their behavior.

She noted that sex education curriculum should focus on intersectionality and consent. “I think there’s an opportunity now for transformative change.”