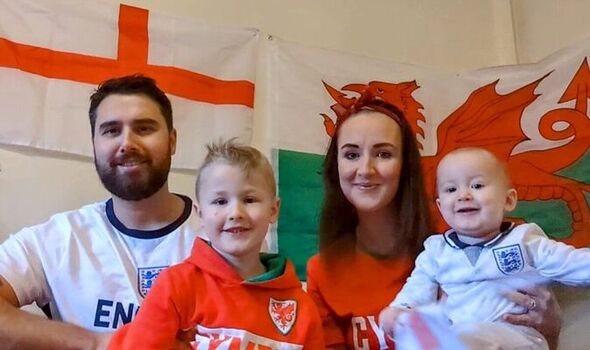 The World Cup England-v-Wales match has divided a family down the middle. Both flags are flying in the Towns household’s front room.

Millions of Britons are expected to tune in this evening as the England team faces Wales in the 2022 FIFA World Cup.

One Cardiff pub has banned fans of Gareth Southgate’s team, believing they would otherwise disrupt the “safe and friendly atmosphere”.

A Plymouth household is, however, having to work on its differences, with family members split down the middle over the two sides.

Bronwyn Towns, 28, and her first son, Joel, are Welsh “through and through”.

But husband Mark Towns, 35, and their second son, Leon, will be batting for England after kickoff.

The couple say they have always had a “friendly rivalry” when it comes to sport given their backgrounds.

Mark, from England, met his wife at a hotel they both worked at in Llangollen, north Wales back in 2014.

READ MORE: Kremlin warns it had ‘no other choice’ but to cancel US nuclear talks

Bronwyn said: “My eldest is Welsh through and through. But my youngest was born in England, and although he’s a bit too young to know what’s going on this World Cup, we think he’ll be cheering for them next time.

“Me and Mark have a friendly rivalry as well and always have done since we met.

Joel is already a keen footballer and plays in goal for a local team.

His mother joked that the likely support for England from Leon will further deepen the family’s rivalry.

She said: “If they’re anything like their mum and dad, when they grow up they’ll be a rivalry between them.

“Both sets of our parents are one half Welsh and one half English which is probably where we get it from to be honest.”

Bronwyn added: “It will be tense in our household on the day of the game – we’ll just have to wait and see who has the bragging rights come next week.”

The two teams are facing off in their final Group B game.

Populists looking to cause upsets as EU elections begin