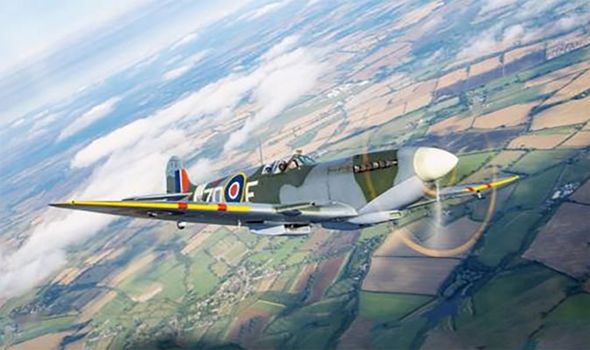 MH415 went on to become a film star, appearing in the classic 1960s movies The Longest Day and Battle Of Britain, which included Michael Caine in a starstudded cast.

It then spent about 40 years in a Texas barn before being shipped to Australia to be restored, and finally coming back to Britain.

Unlike some Spitfires, it is virtually in its original condition.

Richard Grace, of the Aircraft Sales Company, said: “This is the most original Spitfire flying in the world. Only the wing spars have been replaced. It shot down a Focke-Wulf-190 in the Second World War and is a very early Mark IX which is very rare. I have flown it and it is lovely to fly.”

American stunt pilot Wilson “Connie” Edwards took MH415 and some German Messerschmitts in lieu of payment for flying dogfights in the Battle Of Britain film and shipped it to his ranch in Texas.

He flew it a few times but from 1973 it was stored in a barn before being bought in 2014 and sent to Australia. It returned to Sywell aerodrome, Northants, last year.

Conor Feehan: 'Donegal seems to endure more than its fair share of horror on roads'