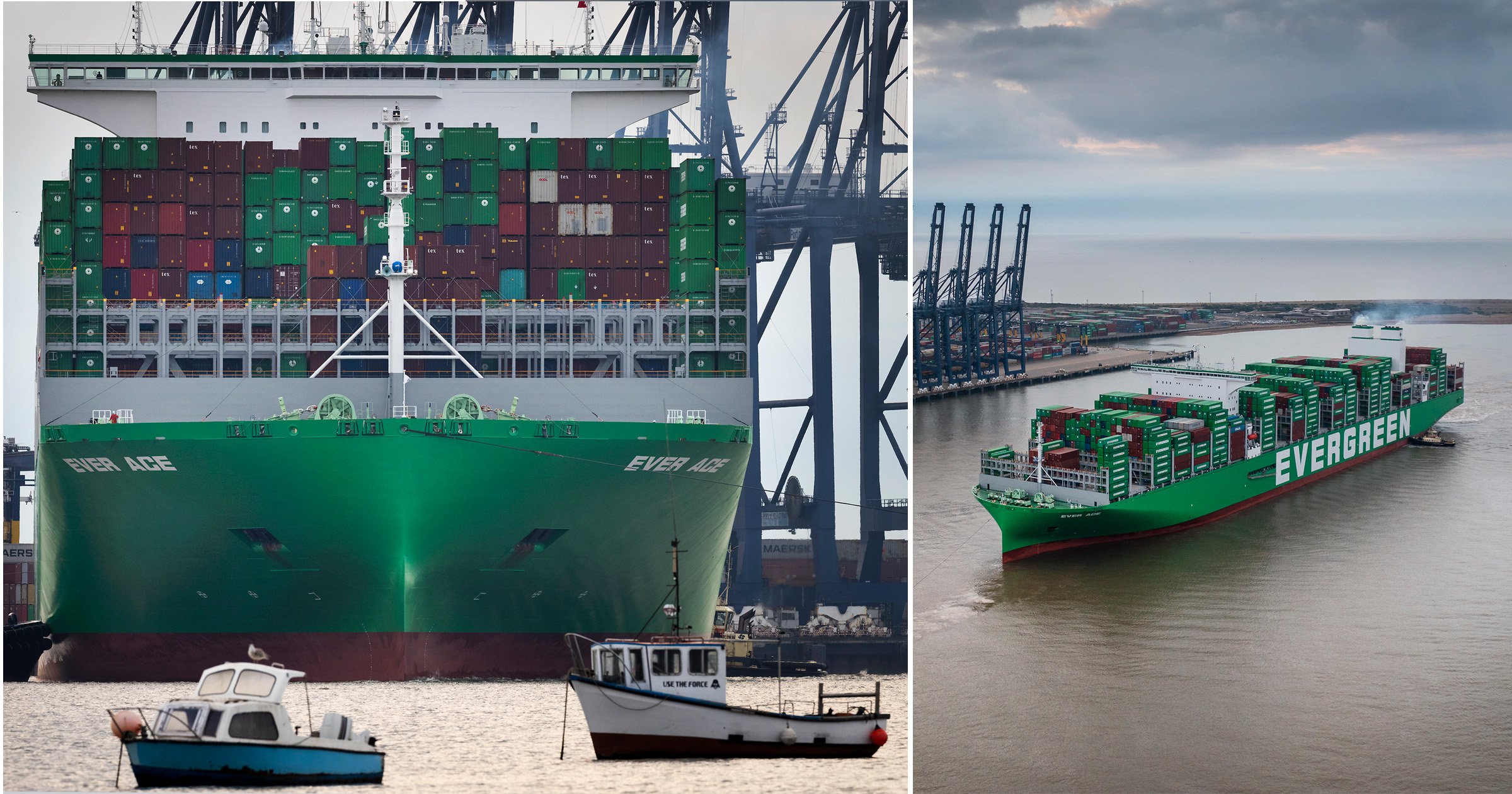 A huge ship, the size of almost four football pitches, has arrived in the UK for the first time ever today.

The ‘mindboggling’ Ever Ace is the largest container ship in the world.

She is a sister ship of the notorious Ever Given, which got wedged into the Suez Canel earlier this year.

Despite the other ship being big enough to cause around £42 billion of disruption to global trade, it is actually smaller than the one currently at the Port of Felixstowe in Suffolk.

It is such a momentous arrival that a crowd of over 100 ship fans were there to watch her enter the mouth of the River Orwell shortly after dawn today.

Exactly what she is carrying as cargo is unknown, but the majority of the thousands of containers on board will contain goods made in east Asia.

The ship will be unloaded by crane before leaving for Hamburg on Wednesday – so you have a few days to have a look, if ships are your thing.

To secure the vessel, four tugs spent around an hour gently nudging the ship into place in one of the port’s deepest berths after it sailed across the North Sea from Rotterdam.

The Panama-registered vessel can carry 23,992 shipping containers crammed deep into its hold and towering above her decks- 26 more than the world’s previous largest container ship, HMM Algeciras.

If placed end to end, the Ever Ace’s full load of 20ft containers would soar nearly 91 miles into the sky – the equivalent of 16 and a half times the height of Mount Everest.

Shipping industry experts say that a single container can carry the entire contents of a two bedroom flat including furniture, fittings, beds, ornaments and appliances.

It is believed that it would take nearly 1,400 jumbo jets to fly the ship’s cargo instead of taking it by sea.

Shipping enthusiast Dean Cable, 28, of Eye, Suffolk, who watched the Ever Ace’s arrival, said: ‘It’s a fantastic sight and a pleasure to see her.

‘There are probably a lot of Christmas presents on board. It is mind boggling what a ship this size can carry.

‘One of the tugs escorting her in was putting on a bit of a show with its water sprays to mark her arrival. It is quite a special occasion.’

The Ever Ace is one of 12 giant ships being built in South Korea and China for Evergreen Marine.

It managed to make it safely through the Suez Canal at the end of August on its first try.

Her sister ship the Ever Given became wedged in a narrow single lane section in Egypt on March 23 this year, delaying scores of other ships.

The ship was refloated after six days, but was then impounded as the Egyptian authorities wrangled with the owners about compensation. It finally arrived in Felixstowe in August.