Squadron Leader George “Johnny” Johnson, 99, dismissed the clasp given to veterans in 2013 by David Cameron as an “insult”. He still refuses to wear it. Bomber Command – responsible for all bombing activities of the RAF 1936-1968 – suffered the heaviest losses of ANY ALLIED command in the Second World War, with 55,573 men killed. The International Bomber Command Centre (IBCC) at Lincoln said: “Of the 125,000 aircrew, 72 per cent were killed, seriously injured or taken prisoner of war.

“Each man was a volunteer, and their average age of death was only 23.” Now Mr Johnson has been backed by royal portrait artist Dan Llywelyn Hall, who painted the veteran to mark his looming centenary.

He said: “None of Bomber Command doing Churchill’s dirty work were properly recognised with a medal and the question remains.

“As a result, the likes of Johnny have had to make the moral argument.”

Mr Johnson, who was a bomb aimer, won the Distinguished Flying Medal for his part in the Dambusters raid 78 years ago this week. 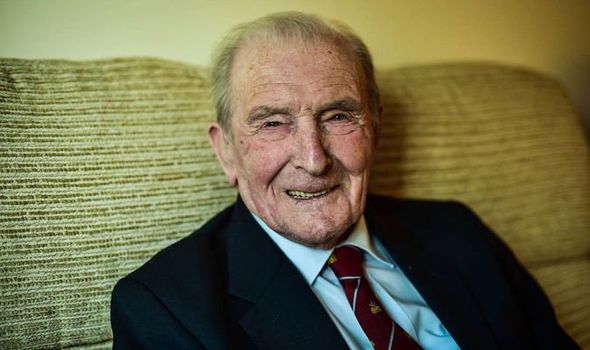 The Möhne and Eder dams were breached, flooding Nazi Germany’s industrial heartland of the Ruhr.

But eight of the 19 Lancasters were shot down and 53 aircrew were killed.

At a 2016 fundraiser, Mr Johnson told the Daily Express of his disgust at the clasp issued in 2013.

He said: “There has been a clasp issued, a coppery sort of thing which has to be attached to one of the existing medals, the 1939-45 Star. To me, that is an insult.”

An MoD spokesman said the idea of the clasp was “agreed and implemented by the Committee on the Grant of Honours, Decorations and Medals and the Queen”.

You can help a new fundraising scheme to support the IBCC in Lincoln by visiting internationalbcc.co.uk

Queen should behave as ‘monarch, not mother’ when it comes to Prince Andrew – POLL