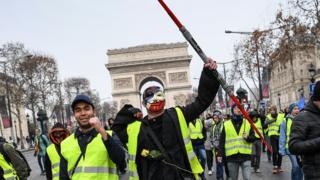 “Yellow vest” protesters have gathered in Paris and other cities for a fifth consecutive Saturday of demonstrations.

About 69,000 police have been mobilised across France to prevent a repeat of the violence of previous weeks.

The movement, initially against a rise in fuel taxes, now addresses other issues, including education reforms.

Fewer than 3,000 people have turned out in Paris so far this Saturday, the authorities say. Last week, there were about 8,000.

Police have stopped and questioned 95 people in the capital, a fifth of the number detained a week ago.

And it emerged that a seventh person had died on Friday in an accident resulting from a blockade by protesters.

Some shops and department stores in the city have closed for the day.

Scuffles broke out in the centre of Paris on Saturday and police fired tear gas to disperse a crowd trying to make their way through police lines.

“This is for the institutions – we want more direct democracy,” he said, adding that people needed to “shout to make themselves heard”.

Some museums are closed, but both the Louvre and the Eiffel Tower remain open.

Smaller protests have also been reported in Toulouse, Grenoble and Lyon. In Calais, a group of “yellow vests’ blocked the access road to the port.

The impact of the “gilets jaunes” (yellow-vest) demonstrations has been keenly felt in France. The government has been forced to bow to pressure and adjust its economic course.

President Emmanuel Macron responded to the nationwide street protests by scrapping an unpopular fuel tax rise, and promising an extra €100 (£90; $114) a month for minimum wage earners and tax cuts for pensioners.

However, it is far from clear that he has done enough to defuse public anger.

The BBC’s Hugh Schofield in Paris says some in the movement are calling for a pause following President Macron’s concessions, but there are still yellow vests around the country who feel now is not the time to ease the pressure.

On Friday, a driver died following a collision with a truck in Erquelinnes, a Walloon municipality on the border with Belgium. The truck had been held up by a group of yellow-vest protesters.

Six other people have died in connection with the protests.