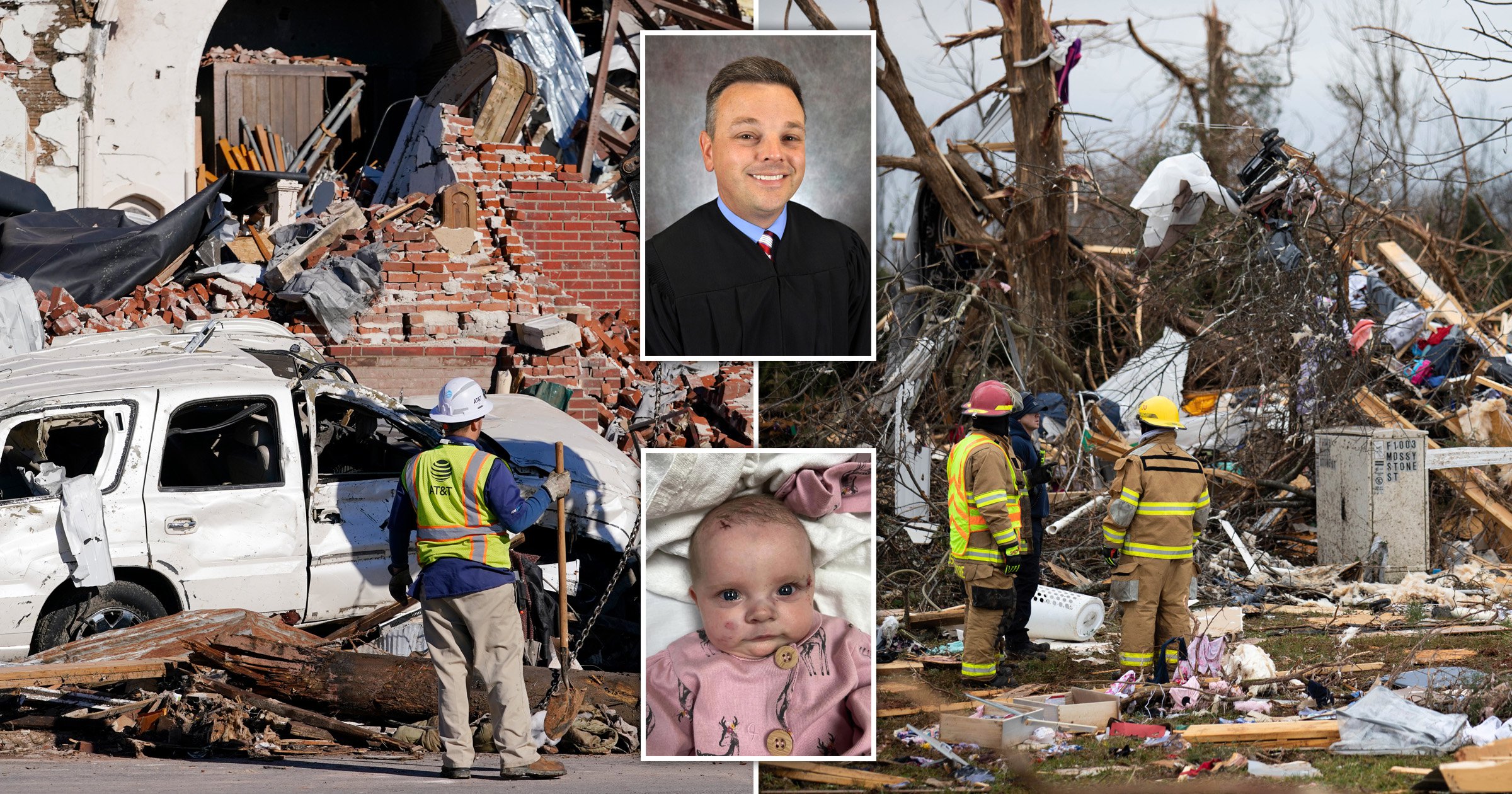 At least 64 people, including two infants, were killed in the devastating rush of tornadoes that hit Kentucky on Friday, Governor Andy Beshear said Monday.

He expects the total death count to continue to rise.

‘It may be a week or even more before we have a final count,’ the governor said during a news conference Monday.

Of the 64 confirmed deaths, 18 of the victims remained unidentified. There are also at least 105 people in the state who are unaccounted for.

Beshear choked up during the briefing, sharing that among the dead were a 5-month-old baby and five other children under the age of 18. The oldest deceased person is 86.

‘I’m really sorry,’ Beshear said. ‘You’re not supposed to lose people like this, and to not know and not have the information has got to make it that much harder.’

Not included in Beshear’s numbers was a two-month-old baby who died Monday after suffering injuries to her neck veins that caused a stroke.

Doug and Jackie Koon had huddled with their daughter and two sons in a bathtub, trying to protect them from the tornadoes passing through. They had been staying at Jackie’s mother’s house trying to stay safe together.

The parents shared the tragic news in a Facebook post Monday, saying that their two-month-old daughter, Oaklynn, had died.

In an interview Sunday with MSNBC, Doug described searching for his family members in the rubble and debris as ‘the most traumatic thing I’ve ever been through.’

‘I felt like I was helpless in protecting my kids against it,’ he said as his daughter struggled to overcome her injuries.

Oaklynn had spent two days in the hospital after the tornado tore through her family’s Dawson Springs home. Her head was incredibly swollen and the veins in her neck were badly injured, likely causing a stroke.

‘At least I know who will be watching over you up there for me. My dad. God this doesn’t seem real,’ the post said.

The White House announced that President Joe Biden would travel to Kentucky on Wednesday to survey storm damage.

First he will travel to Ft. Campbell for a storm briefing, and then to Mayfield and Dawson Springs, two areas hit hard by the tornadoes.

The president already signed an emergency declaration for Kentucky and has ordered his administration to make every resource available to officials in all six states impacted by the storm.

‘We’re going to be there as long as it takes to help,’ Biden said at a news conference.

The tornado, which was part of a raft of tornadoes that tore through six states over the weekend, destroyed a Kentucky candle factory, homes, and numerous police and fire stations.

Kentucky was by far the worst struck on Friday night by 30 tornadoes that ripped across the Midwest, killing another 14 people in Illinois, Tennessee, Arkansas and Missouri.

Six of those killed in other states were Amazon warehouse workers in Edwardsville, Illinois, who became trapped in the fulfillment center. The Mayfield Consumer Products factory in Kentucky kept its workers making candles Friday night as a tornado bore down outside, resulting in the deaths of eight workers. Another tornado crushed a nursing home in Arkansas, killing two.