The Queen’s grandchildren will take centre stage in a vigil ahead of the late monarch’s state funeral on Monday. The Queen’s eldest granddaughter, Zara Tindall, will be joined by Princess Eugenie and Princess Beatrice on the Saturday night vigil.

They will join the Prince of Wales and the Duke of Sussex, who were present at the walking procession from Buckingham Palace to Westminster Hall on Wednesday.

Lady Louise, 18, and Viscount Severn, 14, are the two children of Prince Edward and Sophie, Countess of Wessex.

They will be placed in around the middle of the Queen’s coffin, The Times’s royal editor Roya Nikkhah tweeted. 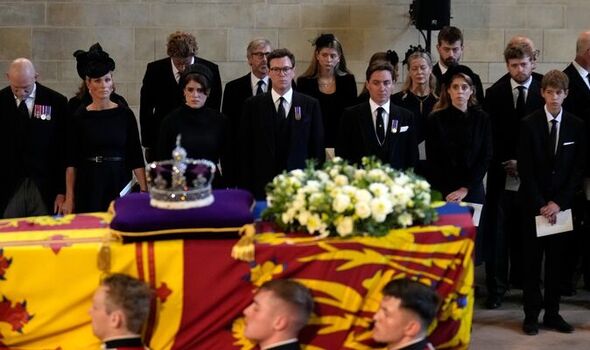 Prince William, the heir to the throne, will stand at the head of the vigil, with Prince Harry at the opposite end.

The Prince of Wales and the Duke of Sussex will both be in military uniform per the King’s request, Ms Nikkhah added.

Prince Harry was not permitted to wear military dress during Wednesday’s procession, as he is not a working member of the Royal Family.