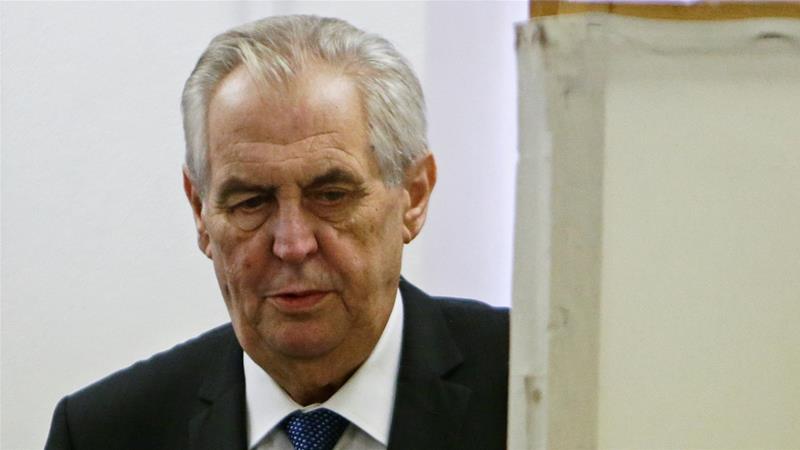 The outspoken pro-Russia, pro-China Zeman was declared the winner with 51.36 percent of the vote on Saturday. Opposition candidate Drahos, who garnered 48.44 percent of the votes, conceded defeat in what is considered the most important presidential elections in decades.

After taking office in 2013, Zeman, 73, has been widely criticised for dividing the country on European issues including immigration and the role of Central Europe in the EU, while also cosying up to autocratic governments.

The victory has dashed hopes that the Czech Republic would return to the fold of liberal European values as it inches closer to countries like Poland and Hungary where far-right politics is on the rise.

“It is the victory for populism. He is the people’s image of populism and this election is probably the defeat of the western, urban educated part of Czech society,” said Lubomir Kopecek, a professor of political sciences at Masaryk University in Czech city of Brno.

Addressing reporters and supporters – including the heads of far-right parties – Zeman thanked the voters for his re-election.

“Let me thank you [with] all of my heart for your help and support in the election of the president of the Czech Republic. If it weren’t for you, we wouldn’t have won,” said the 73-year-old far-right leader, sitting cross-legged on a couch.

“This is my last political victory and there won ‘t be any political defeat behind me, because as you well know the president has only two five-year terms as defined in the constitution and I certainly don’t want to initiate constitutional changes.”

Jakub Janda, deputy director of the think-tank European Values, said that the win demonstrated Zeman’s ability to mobilise voters based on a platform that was both anti-immigrant and anti-establishment.

“He has been in top positions in Czech politics for 25 years, but has been able to establish himself as the anti-establishment by targeting the mainstream,” he said.

“The second reason is that he has strong support in the regions outside the capital and he positions himself as a regular person, and not a politician, so he is very outspoken, doesn’t use normal language and despises political correctness, calling most migrants terrorists.”

Muslims form a tiny 0.02 percent of the population of the Czech Republic, but Zeman capitalised on the fear of immigrants that has swept Europe in recent years. In this election, his campaign slogan stated simply: “Stop immigration and Drahos. This country is ours.”

Though largely ceremonial, the presidency is a meaningful barometer for the political temperature of the country. The president also appoints high-ranking diplomats and public officials, including the prime minister – a position that lies vacant currently.

Populist billionaire Andrej Babis from the ANO party was forced to resign earlier this month after failing to win a vote of confidence in parliament.

Seen as close allies, Zeman has given Babis all the time he needs to form a coalition after his ANO party won 78 seats in the 200-member chamber of deputies (the lower house).

Zeman has said he would appoint Babis once he has the requisite support from 101 seats. There is currently no second vote scheduled.