Brazilian president continues to tout hydroxychloroquine as treatment despite studies finding it ineffective.

Brazil’s President Jair Bolsonaro has continued to tout an unproven anti-malarial drug as a treatment for the new coronavirus after testing positive for COVID-19.

After months of downplaying the virus’s severity, the 65-year-old far-right leader announced on Tuesday he had been diagnosed with the highly infectious respiratory disease but already felt better thanks to hydroxychloroquine.

Hours later, the former army captain shared a video of himself gulping down what he said was his third dose.

“I trust hydroxychloroquine,” Bolsonaro said, smiling. “And you?”

On Wednesday, he was again extolling the drug’s benefits and claimed his political opponents were rooting against it.

“To those who cheer against hydroxychloroquine, but have no alternatives, I regret to inform you that I am very well with its use and, with the grace of God, I will live for a long time,” Bolsonaro wrote on his Facebook page.

A string of studies in the United Kingdom and the United States, as well as by the World Health Organization (WHO), have found hydroxychloroquine and chloroquine ineffective against COVID-19 and sometimes deadly because of their adverse side effects on the heart. Several studies were cancelled early because of adverse effects.

A forceful critic of lockdown measures, Bolsonaro has largely shunned masks and derided the coronavirus as a “little flu”. Instead, he has placed his faith in hydroxychloroquine and chloroquine, turning them into the centrepiece of his government’s virus-beating playbook.

The two medications are often used against malaria, while hydroxychloroquine is also used to treat certain autoimmune diseases.

Natalia Pasternak, a research fellow at the Institute of Biomedical Sciences at the University of Sao Paulo, said Bolsonaro was setting a “bad example”.

“He took hydroxychloroquine in public saying he’s feeling good and that it was probably because of the medicated when we know that the medication doesn’t work for COVID-19, so it’s dangerous,” she told Al Jazeera.

Kleber Carrilho, a political analyst in Sao Paulo, added: “He’s saying that it’s a possibility of a cure and … he’s confirmed that it’s a ‘little flu’, it’s not a problem for him – and we have a lot of people here who believe him. Then it’s a big political and health problem, after all the economic problems.”

For nearly two months now, Brazil’s fight against the coronavirus has been in the hands of an interim health minister, an army general with no healthcare experience before April.

He took over after his predecessor, a doctor and healthcare consultant, quit in protest over Bolsonaro’s support for hydroxychloroquine.

The health ministry has distributed millions of chloroquine pills across Brazil’s vast territory. They have reached small cities with little or no health infrastructure to handle the pandemic and even a remote Indigenous territory.

“He [Bolsonaro] has become the poster boy for curing COVID with hydroxychloroquine,” Paulo Calmon, a political science professor at the University of Brasilia, told The Associated Press news agency.

“Chloroquine composes part of the denialist’s political strategy, with the objective of convincing voters that the pandemic’s effects can be easily controlled.”

With more than 1.7 million registered cases of the coronavirus and nearly 68,000 deaths, Brazil has risen in the charts as a global hotspot for the pandemic – with the second-highest number of cases and fatalities after the United States.

Bolsonaro’s government has come under fire for its handling of the pandemic, with protesters at home and abroad taking to the streets, demanding his resignation.

The former army captain has often appeared in public to shake hands with supporters and mingle with crowds, at times without a mask.

He also repeatedly said there is no way to prevent 70 percent of the population falling ill with COVID-19, and local authorities’ measures to shut down economic activity would ultimately cause more hardship than allowing the virus to run its course. 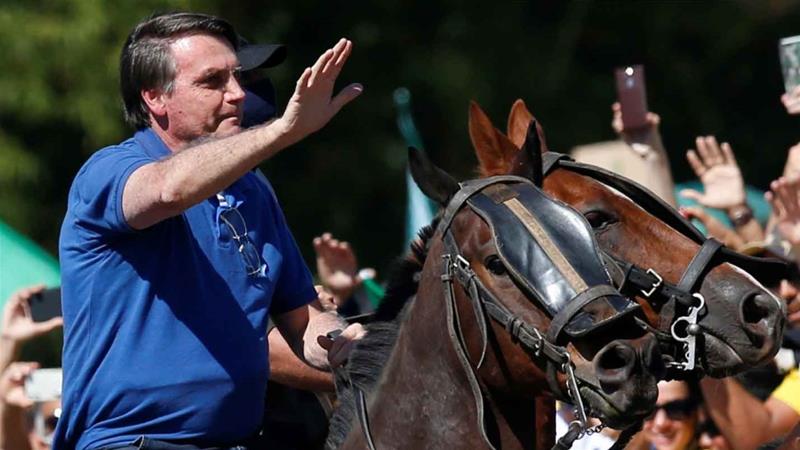 Top Venezuela judge defects to US

Viewpoint: ‘How did we let them get away with so much?’