Judge authorises probe into allegations made by ex-justice minister that the president tried to interfere with policing. 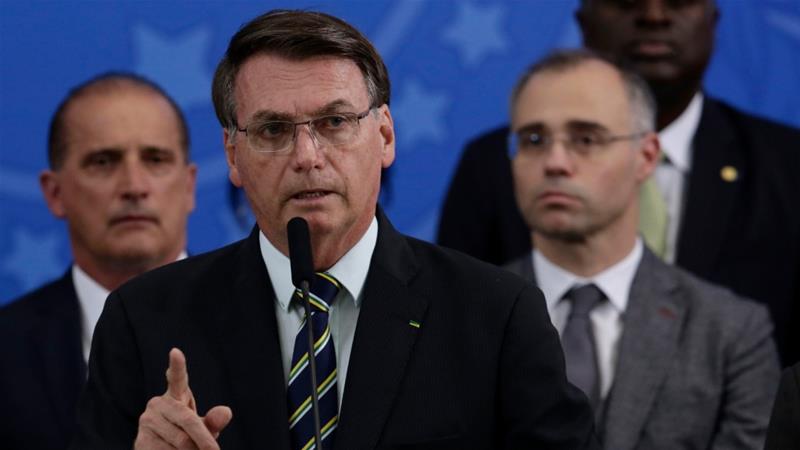 Brazil’s Supreme Court has ordered an investigation into accusations that President Jair Bolsonaro sought to “interfere” with police investigations for political gain.

The findings, which will be handed over to the attorney general, could result in either a request for a political trial against Bolsonaro or an indictment against Moro for false testimony.

According to the judge, “the crimes allegedly practised by the president of the republic” seem to have “an intimate connection with the exercise of the presidential mandate”, which allows for an investigation of Bolsonaro.

Moro, a former anti-corruption judge, resigned on Friday after clashing with Bolsonaro over the sacking of the federal police chief.

During Moro’s announcement of his resignation on April 24, he said Bolsonaro had told him on multiple occasions that he wanted to replace the head of the federal police with someone who could facilitate access to investigations and intelligence reports.

He hit out at “political interference” with the federal police, saying he could not do his job without “autonomy” for the force.

The Supreme Court judge’s document, obtained by AFP news agency and reported by local media, lists seven accusations against Bolsonaro, including malfeasance and obstruction of justice.

Last week, Brazil’s Prosecutor General Augusto Aras asked the Supreme Court to open an investigation into the allegations made by Moro, who made a name for himself as the top judge in the anti-corruption investigation known as “Car Wash”.

Bolsonaro claimed the former official had resigned of his own accord, which Moro said was untrue and also that he had not signed off on any resignation.

Should the investigation confirm the accusations, it will be up to the Brazilian Congress to initiate an impeachment process against Bolsonaro and potentially remove him from office.

A poll published on Monday night shows divided opinions about Bolsonaro’s future, with 45 percent of Brazilians saying Congress should open an impeachment process against the right-wing leader.

In comparison, 48 percent think Bolsonaro should not be impeached, according to the Datafolha poll.

The tensions come at the height of the global health crisis over the coronavirus.

Last week, Bolsonaro fired his Health Minister Luiz Henrique Mandetta, who supported isolation as a tool to contain the spread of the pandemic. Bolsonaro has repeatedly downplayed the danger of COVID-19.

As of Tuesday, Brazil reported more than 67,000 confirmed coronavirus cases with at least 4,600 deaths.

The Brazilian footballer who never was

What are Jair Bolsonaro’s policies?