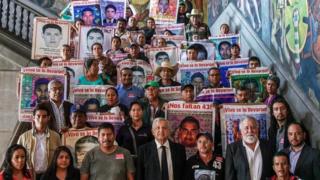 On the evening of 26 September 2014, a group of 43 Mexican students disappeared in south-western Guerrero state. Five years later, the case remains shrouded in unanswered questions.

When news of the young trainee teachers disappearing was first reported, it sent shockwaves around the world. In Mexico, it continues to be a dominant political issue and source of protests to this day.

While authorities long ago claimed to have uncovered the “historic truth” of the case, rights groups and families of the 43 say they are still awaiting real answers and justice.

Here is what we know – and do not know – about the missing students.

The 43 studied at an all-male teacher training college in the town of Ayotzinapa. The college has a history of left-wing activism and the students regularly took part in protests.

What were they doing on the day of their disappearance?

The 43 were part of a larger group of teacher trainees from Ayotzinapa who travelled to the nearby town of Iguala to protest against what they saw as discriminatory hiring practices for teachers.

They also wanted to raise funds for a trip they were planning to Mexico City to mark the anniversary of the 1968 Tlatelolco Massacre, when a large number of students were killed by the security forces in the capital.

One member of the group said they were planning on commandeering a number of buses for their trip, although he insisted they would convince the drivers to take them rather than force them.

What happened that night?

The officers maintain they did so because the buses had been hijacked, while the surviving students say the drivers had agreed to give them a lift.

Police also mistakenly fired on a bus carrying a local football team, killing its driver and one of the players on board. A woman travelling in a nearby taxi was killed by a bullet.

Three students were also killed, two of them shot dead, while the body of the third was found mutilated the next morning near the scene of the shooting.

What about the missing 43?

A group of 43 students was reported missing after the clash between the municipal police and the students. An official government report said they were seized by municipal officers and taken to the police station in the nearby town of Cocula.

There, they were handed over by corrupt police officers to members of a local drugs gang, Guerreros Unidos (United Warriors), the report said.

The gangs then took them to a local rubbish dump, where they killed them and burned their bodies, the official report continued. They dumped their bones and ashes in a nearby stream, it concluded.

However, that report has since been widely discredited, and prosecutors are investigating the attorney general who was in charge of the probe as well as his top aides.

Have any of their remains been found?

Independent forensic experts matched charred bone fragments reportedly found at a rubbish dump near Iguala to Alexander Mora, one of the 43 missing students.

They also said there was a high probability that another set of remains could be those of Jhosivani Guerrero de la Cruz, another of the students.

However, experts from the Inter-American Commission of Human Rights later said that the chain of evidence had been broken and that they could not be sure Alexander Mora’s bone fragments came from the dump.

Another independent investigation by Argentine forensic experts also concluded that there was no biological or physical evidence to indicate that the bodies of the 43 students were burned at the rubbish dump.

Just days ahead of the fifth anniversary of the students’ disappearance, the head of Mexico’s human rights commission said that the state had failed to solve the case.

“We don’t know with any certainty were the youngsters ended up and there is impunity, Luis Raúl González Pérez said.

If they were not killed in Cocula, where are they?

Many relatives have long suspected that students were taken to the local army barracks. They demanded access to the barracks months after their disappearance but were denied entry.

The government of President Enrique Peña Nieto, which was in power until December 2018, refused to let the soldiers be questioned by anyone but government prosecutors, which raised suspicions among the relatives that there was a cover-up.

Why did the students become a target in the first place?

There have been many theories as to why the students may have been targeted. Their left-wing activism and protests in Iguala had angered the mayor of the town at the time, José Luis Abarca, even before the night of the clash.

On the day the students came to Iguala, Mr Abarca’s wife, María de los Angeles Pineda, was giving a speech at the town square, and there was speculation police were sent to stop the students from disrupting her event.

The couple fled the town after the students’ disappearance and were later arrested in Mexico City. They remain in prison awaiting trial on charges of links with organised crime.

They allege they were forced into giving false evidence. In a report last year, the United Nations Office of the High Commissioner for Human Rights found that suspects in the case were subjected to torture and other human rights violations.

Who else has been arrested?

Dozens of suspects have been arrested in connection with the disappearances but no charges have been brought.

The mayor of Cocula, where corrupt officers reportedly handed the students over to the Guerreros Unidos gang, was charged over his links with organised crime and remains detained. His family this year called for his release, saying he was a victim of ill-treatment and torture.

A number of police officers and Guerreros Unidos gang members are also under arrest in connection with the students’ disappearance.

According to police interrogators, the gang members said they had killed the students because they had mistaken them for members of a rival gang called Los Rojos.

But earlier this month, a key suspect in the case – Guerreros Unidos leader Gildardo López Astudillo, known as El Gil – was released from prison after a judge found that he had been tortured to obtain evidence.

A judge also ordered the release of 24 local police officers for the same reason.

Of the 142 people arrested in connection with the case, fewer than half remain in custody, according to Mexico’s deputy secretary of human rights, Alejandro Encinas.

What is the current government doing?

President Andrés Manuel López Obrador, who was sworn in in December 2018, made getting to the bottom of the case a key campaign pledge when he was running for office.

Just days before the fifth anniversary of the students’ disappearance, the attorney-general’s office announced that a new investigation would be opened.

President López Obrador said that finding out what had happened to them was “about justice, about humanism and also about Mexico’s reputation”.

‘If we stand together, they can’t kill us’