Home » Latin America » Mexico's National Guard: What, who and when

The controversial force is officially starting operations across the country on Sunday. 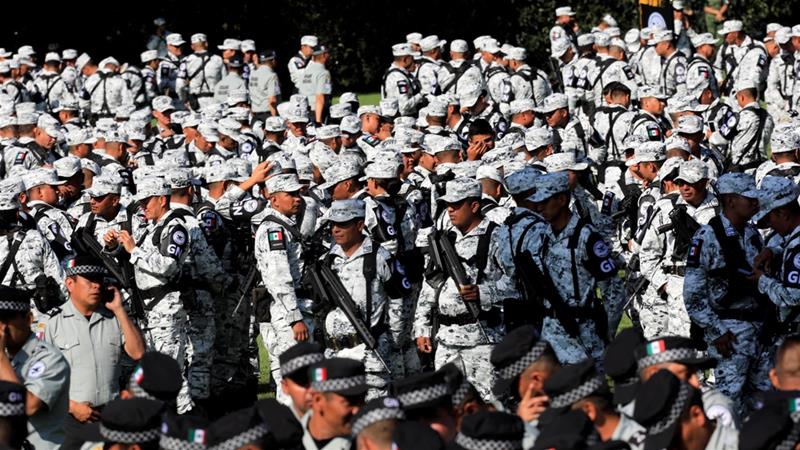 Mexico’s recently formed National Guard is beginning operations on Sunday with the task of improving the country’s deteriorating security situation.

“Although it is already operating in some states, the national, formal operation will begin on June 30,” Lopez Obrador said last month. Earlier this week, the president said Sunday’s deployment would involve 70,000 National Guard members.

In the capital, Mexico City, some 2,700 members of the force will be deployed on Sunday in eight of its 16 municipalities, according to Mayor Claudia Sheinbaum.

Some activists and analysts, however, have expressed concerns about the force’s deployment and questioned the duties of its members.

Here, Al Jazeera takes an in-depth look at what is the National Guard and what will be its effect.

What is the National Guard?

Authorities have presented the National Guard as a hybrid institution that combines officers from the army police, naval police and federal police.

Lopez Obrador has said he wants the forces’ members to display military discipline.

“The situation is really severe, not only due to the current levels of criminal violence … but also because we don’t have the members to fight this insecurity,” he told Mexican news outlet Milenio last month.

“Governments have spent 20 years trying to train the federal police, and it has not been possible, they are corrupt. The army instead is an institution that has more professionalism and antiquity,” he added.

Before his election last year, the president had initially campaigned on a promise to break from the policies of his predecessors and pull the military off the streets.

But shortly before taking office on December 1, 2018, Lopez Obrador proposed the formation of the National Guard, under military command, as a response to an increasingly destructive situation.

According to local reports, the first quarter of 2019 is already the most violent in Mexico’s modern history. Nearly 8,500 people were murdered in the first three months of the year. 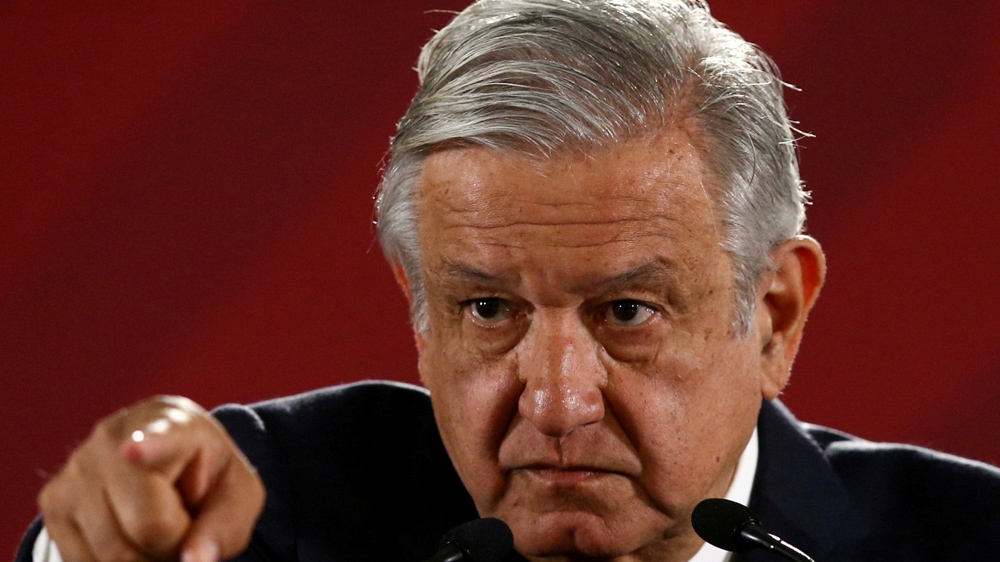 Who forms part of National Guard?

In February, Durazo had proposed an initial make-up of 35,000 army soldiers, 8,000 navy police members and 18,000 federal police members – a total of 61,000 members. The final composition of the force deployed on Sunday is still not clear.

The National Guard’s top commanders are military officers, who report to Durazo.

The force “will follow with the discipline, hierarchy and rank of the armed forces”, the government said in its National Plan for Peace and Security.

According to the plan, the military will remain active in the fight against crime over a five-year period, while the National Guard is made fully operational.

After that transition period, the military will be pulled from the streets.

According to the National Law on the Use of Force, which was introduced in May, National Guard members could use force when deployed, but this must be proportional to the level of resistance displayed by the aggressor.

The use of lethal force must correspond to an imminent lethal threat, such as the threat of a firearm or a person threatening with a sharp weapon an agent, or a victim.

The law also authorises the use of force against protests that do not have a “lawful purpose”, and gives security forces the power to assess whether or not a demonstration is lawful.

It is also establishes that detentions by National Guard members could be filmed, but this is not mandatory. 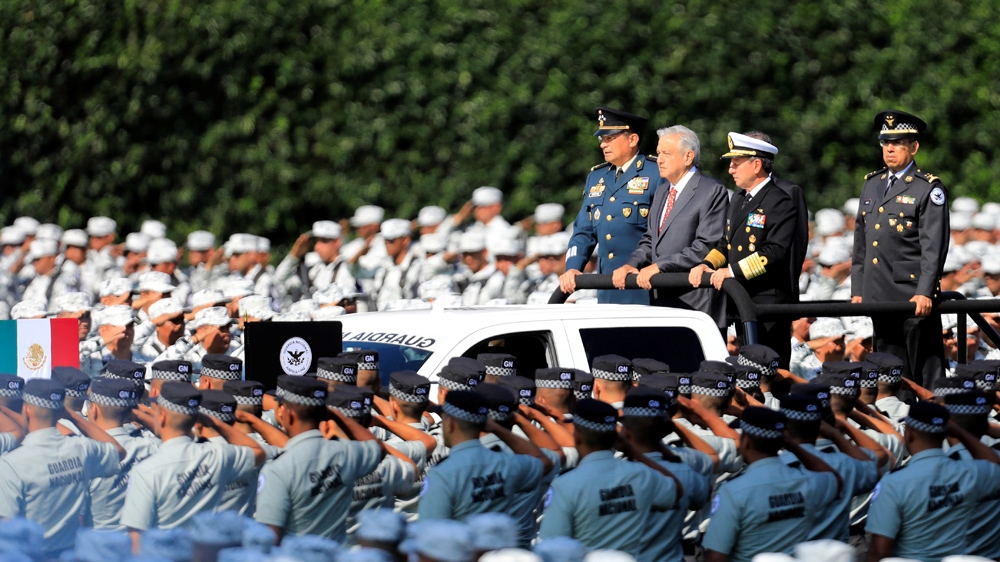 Past Mexican administrations have used the military to combat drug cartels after determining that local police forces were corrupt.

But the deployment of military forces led to an increase of abuses, including allegations of torture, enforced disappearances, extrajudicial executions and arbitrary detentions, according to Amnesty International.

The National Plan for Peace and Security recognises that a military unit’s ultimate purpose is to confront, neutralise and destroy an enemy force.

It blames, however, inadequate human rights training for the mistakes previously made by the armed forces and says it plans to change this.

“The military have been in many instances acting as sources of violence  … it’s the way they operate, the army has been trained to destroy the enemy,” Falko Ernst, an analyst in Crisis Group, told Al Jazeera.

“So what [the government] is doing is to introduce another violent actor in an already violent context.”

Another concern cited by activists is that the regulation that explains the legal provisions under which the National Guard will operate has not been issued yet. However, there is a law that defines its functions and organisation.

“This deployment is unconstitutional,” said Pablo Girault, adviser of the Mexico United Against Crime NGO.

“They will start activities without having rules, or protocols – not even the budgets have been announced yet.”

“[In my view], what they are effectively doing is using military members that were already out [in the streets[, but they are now calling them a National Guard.”

Last week, almost 15,000 army soldiers and National Guard members were deployed to the north of the country.

Photographs of heavily armed National Guard members detaining two women at the Mexican side of the border with the United States were criticised by activists.

Lopez Obrador acknowledged that the National Guard was not instructed to carry out detentions during its border deployment.

But besides what analysts described as an “alarming violation”, they also questioned the use of the force to contain a wave of mostly Central American migrants instead of its stated primary purpose to combat organised crime.

“This worries the general population,” Javier Buenrostro, a professor at the National Autonomous University of Mexico, said.

“They are expected to deal with public safety, and now they are somehow involved with immigration.

“This might have been inevitable, due to the lack of resources from the state, but the population needs a legal certainty on the Guard’s role and attributions,” he added. 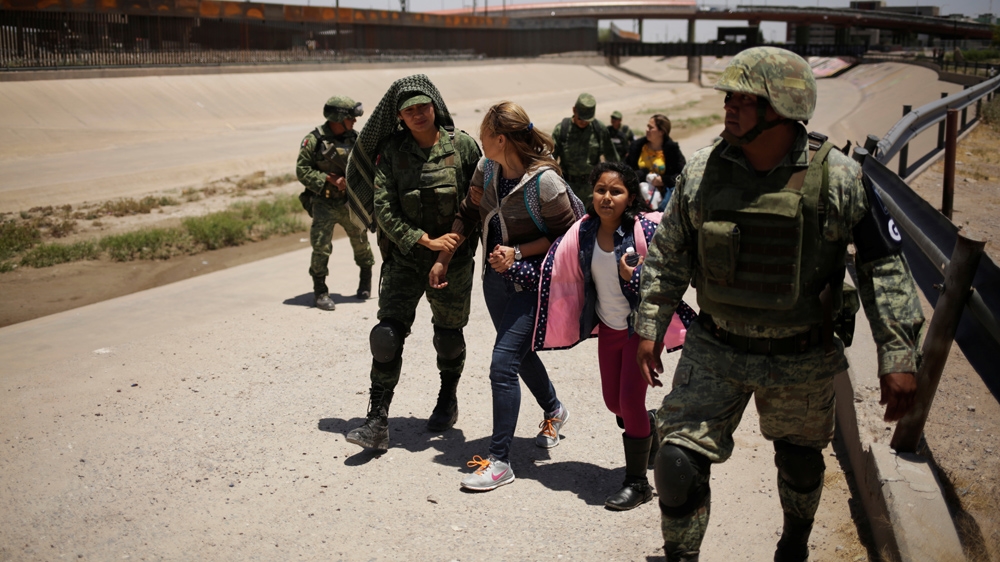 Is this a good idea?

The national deployment of the National Guard might have been met with scepticism by some, but others believe it is needed as a response to an “extraordinary situation”.

“The increase of homicides and kidnappings in Mexico has forced this current government to take these measures,” Buenrostro, the professor, said.

“And while there are academic discussions that are important … people are demanding more safety and there is a big approval towards this initiative.

“There are things that still need to be addressed, but the government is responding to an emergency,” he added, describing the situation in Mexico as “a small civil war”.

Lauro Gonzalez, a doctor and community leader in Veracruz, the state that in April witnessed the first deployment of the National Guard, agreed.

“The gangsters had passed all the limits in Veracruz,” Gonzalez told Al Jazeera, arguing that the situation has improved since the deployment of the force.

But others described the deployment as another effort to deploy the military in the fight against crime, arguing that this was no different from previous failed strategies.

“We have a force that is still not fully consolidated,” Girault, the NGO adviser, said.

“It also has the same elements and the same plan that other governments have executed before.

Girault also warned that the presence of forces on the streets of Mexico City would affect “social coexistence”.

“It will deteriorate the relationship between the authorities and the citizens, and it will increase the human rights violations,” he said.

Belen Gonzales, a citizen from Veracruz, who says Marines were involved in the disappearance of her son in 2015, was also worried about a permanent militarised force on the streets.

“The forced disappearances haven’t stopped, and if the National Guard comes with carte blanche to do what they want, they will go on – that is what we don’t want, more dissapearances, more human rights violations.”

Chileans under curfew as protest death toll at 13