The lagoon has seen similar fish die-offs in previous years and biologists believe that extreme heat is the culprit. 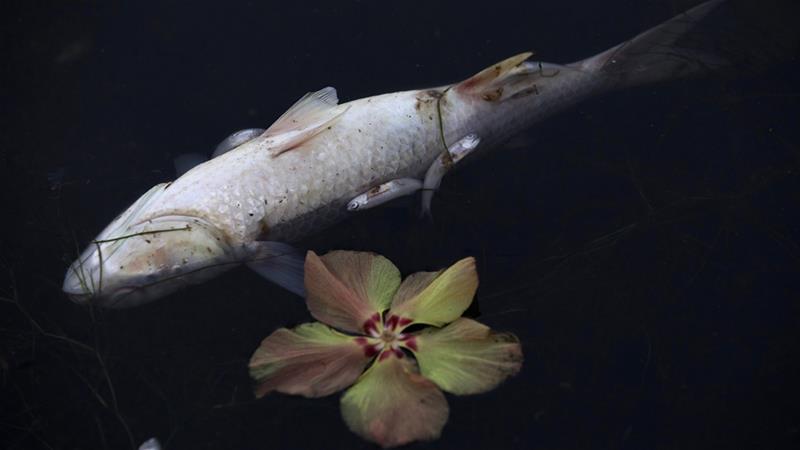 Residents of a luxury, high-end neighbourhood in Rio de Janeiro awoke Friday to the unpleasant odour of 13 tonnes of dead fish floating in the water of the Rodrigo de Freitas lagoon.

One of the city’s picture postcard locations, the lagoon has suffered similar fish die-offs in previous years and biologists believe that extreme heat is the culprit.

Mass die-offs, or “kills”, happen periodically throughout the world. They can be caused by pollution or toxic spills, but can also be triggered by natural phenomena, such as hot weather.

Heat reduces the amount of oxygen dissolved in the water, which can prove fatal to marine life.

It is currently summer in Brazil, as it is the rest of the southern hemisphere, and with El Nino emerging in the Pacific Ocean, the season is expected to be hot.

El Nino is the warming of the waters of the Pacific Ocean and is known to affect the weather around the globe. In Brazil, it usually brings hotter weather than usual to the southeast and makes the coastal waters around Rio stagnant.

Biologist and ecosystem specialist Mario Moscatelli told the Associated Press news agency that he is convinced that climate change is heating up the basin of the lagoon.

“We need to modernize and rethink the situation of Rodrigo de Freitas lagoon because the basin is becoming too hot,” he said. “Even if we stop the pollution by sewage completely, even if the canal (the canal that connects the lagoon to the ocean) is cleared, it might not be enough in the new climate reality. We have to think and react or this will become a fish cemetery again.”

Globally, there are regular fish die-offs throughout the year, but the numbers are thought to be increasing.

In October, hundreds of thousands of fish were found dead in a lake in Metapan, El Salvador, when the oxygen levels dropped.

In November, tens of thousands of dead starfish washed up on a beach in Lincolnshire in the UK. They are believed to have been ripped from the seabed in rough seas and dumped on the sand.

Lula to be let out for grandson’s funeral