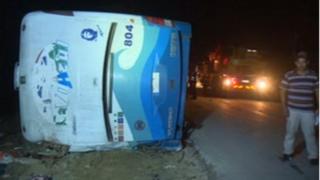 A bus crash in eastern Cuba has left at least seven people dead, including four foreigners, and dozens others injured, local media say.

Two of the foreigners were from Argentina while one was from France and another from Germany.

Some 33 people were injured, including citizens from the UK, the US, Canada, France, the Netherlands and Spain.

Thursday’s accident happened between the eastern cities of Baracoa and Guantánamo.

Five of the injured were said to be in critical condition.

The bus, from the state-owned company Viazul, was travelling from Baracoa to the capital, Havana, carrying 40 people, including 22 foreigners, state media say.

The driver told local media that he lost control on a wet section of the road. But witnesses said the accident happened after he tried to overtake another vehicle.

The UK Foreign Office said it was “seeking information from the Cuban authorities” and that it was “ready to assist any British people who require our help,” a spokesperson told the BBC.

Viazul is run by the military’s tourism wing and is one of the preferred ways for visitors to travel the island, the BBC’s Will Grant in Havana reports.

Cuba’s roads are notoriously poor with many of them badly-lit and poorly maintained, especially in that region of the country, our correspondent adds.

Traffic accidents are common in Cuba and have resulted in some 4,400 deaths since 2012, according to official data cited by EFE news agency.

Venezuela: A simple guide to understanding the current crisis