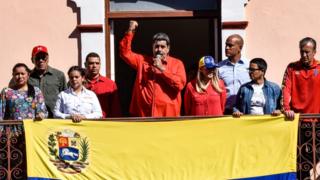 The US has charged Venezuela’s President, Nicolás Maduro, and other senior officials in the country with drug trafficking crimes.

The move, which will increase tensions between the two nations, was announced by Attorney General William Barr.

The US also offered a $15m (£12.5m) reward for any information leading to Mr Maduro’s arrest.

It has long accused him of leading a corrupt and brutal regime, a charge he has repeatedly rejected.

The new charges represent an escalation in the longstanding US pressure campaign on Mr Maduro, which has also included sweeping sanctions on Venezuela’s oil industry.

As well as Mr Maduro, the US indictment charged more than a dozen Venezuelan officials including the country’s chief justice.

“The Venezuelan people deserve a transparent, responsible, representative government that serves the needs of the people – and that does not…. engage in illicit narcotics trafficking,” the US state department said.

“These individuals violated the public trust by facilitating shipments of narcotics from Venezuela, including control over planes that leave from a Venezuelan air base,” it added.

At a news conference on Thursday, Mr Barr accused Mr Maduro of working with a Colombian rebel group “to flood the United States with cocaine.”

“While the Venezuelan people suffer, this cabal… lines their pockets,” he said.

Venezuela is yet to respond to the charges.

What’s the background to the Venezuela crisis?

Mr Maduro narrowly won a presidential election in April 2013 after the death of his mentor, President Hugo Chávez.

He was elected to a second term in May 2018 in an election seen as flawed by international observers.

Mr Guaidó has accused President Maduro of being unfit for office. He has won the support of many in the country as well as US and EU leaders.

But Mr Maduro has remained in power and is backed by Russia, China and Cuba.

The Searchers: Mexican women who look for the dead