Home » Latin America » What next for Venezuela? 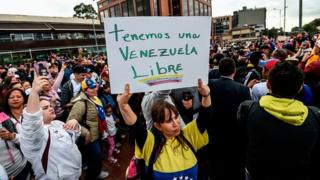 The political crisis in Venezuela has taken a dramatic new turn with the decision by US President Donald Trump and several Latin American countries to recognise the opposition leader Juan Guaidó as the country’s interim president.

Their decision has inevitably inflamed tensions, bolstering critics of socialist President Nicolás Maduro who, in response, has cut ties with Washington. So what happens next?

Our diplomatic correspondent Jonathan Marcus and Latin America online editor Vanessa Buschschluter look at what could change – both inside and outside Venezuela.

Can external pressure change things on the ground?

Jonathan Marcus: In a sense, the declarations from the US, Canada and a number of other Latin American countries, including Venezuela’s neighbours Brazil and Colombia, change everything and nothing.

President Maduro retains the levers of power. His opponents, of course, will be emboldened, but this could simply be a recipe for civil strife and repression.

Two parallel governments recognised by different countries abroad means little if President Maduro retains the support of the forces of law and order, and especially the military.

In such a situation, Venezuela’s economic chaos is only likely to get worse.

What is the likelihood of prolonged unrest?

Vanessa Buschschluter: Events in Venezuela are notoriously hard to predict because neither the government nor the opposition are monolithic groups.

Instead they are made up of factions that often disagree, and the faction that holds power can shift quickly.

The last mass protests in Venezuela were in 2017. The government’s response was quick.

The National Guard fired tear gas and rubber bullets and – in some cases – live rounds. The deaths quickly mounted and were well over 100 on both sides of the political divide.

The UN said the security forces had used disproportionate force and arbitrary detentions to instil fear. 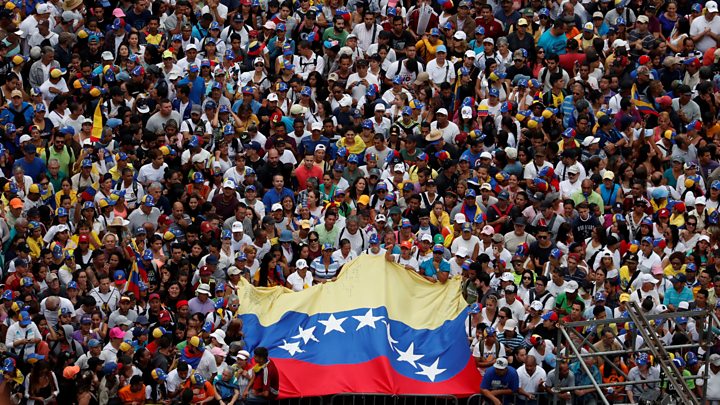 In August 2017, after more than four months, the protests died down with many of those who had formerly taken to the streets saying they did not want to risk their lives or face arrest.

Whether there will be unrest in the wake of Mr Guaidó’s move to declare himself acting president will depend largely on the reaction of Venezuela’s security forces to the renewed protest marches.

What further steps could the US take?

Jonathan Marcus: The Trump administration has a variety of tools at its disposal. It could step up economic sanctions; it could reinforce asset freezes targeted against individuals or entities associated with the Maduro government.

It could also put the government and its military commanders on notice that any attacks on civilians or stepped-up repression will be closely monitored and documented, with the possibility of some form of international judicial involvement in the future.

But economic sanctions are a blunt instrument and, in an impoverished society, are only likely to make things even worse for ordinary people.

Could this crisis take on a military dimension?

Jonathan Marcus: Despite his rhetoric, President Trump is remarkably risk-averse in terms of military deployments.

After all, this is the president who is pulling US troops out of Syria and reportedly wants to slash US forces in Afghanistan by half.

It is unlikely that he will want to send the marines into Venezuela in current circumstances.

However, if the country descended into total chaos, there might be calls from some quarters for intervention.

That would require significant international support – especially from within Latin America – and probably backing at the UN Security Council, too.

It is hard to see this being forthcoming, given Russia’s support for President Maduro and China’s traditional opposition to what it sees as meddling in individual countries’ affairs.

At the moment, there is only one military that matters and that is in Venezuela itself. In past upsurges of protest, the armed forces have stood by President Maduro.

Will this remain the case? It is their loyalty which will determine the fate of the current regime. But if the military or wider security forces split, then this again could simply lead to greater violence.

Vanessa Buschschluter: The security forces have so far been loyal to President Maduro and his government.

Mr Maduro has kept them on his side by regularly raising their wages and rewarding them for their loyalty.

He has also put senior military officials in key posts in the government. But with Venezuela’s economy further deteriorating, the lower ranks are reportedly getting increasingly dissatisfied with the government, which they blame for the shortages of medicines and food and frequent power and water cuts.

A video widely shared on social media after an aborted rebellion by a small group of National Guardsmen on 14 January shows one of them complaining about the fact his mother cannot get cancer drugs.

Footage uploaded to social media after Wednesday’s protests also appeared to show a group of National Guardsmen blocking a road but walking away as protesters approached, to the applause of those marching.

However, the higher ranks still appear to be loyal to Mr Maduro. On Thursday, Defence Minister Gen Vladimir Padrino read out a statement condemning what he called an attempted coup d’etat, which he said was backed by the extreme right and “criminal agents”.

How is this crisis dividing the international community?

It has warned the US not to intervene militarily.

A Kremlin spokesman has said that outside interference in the country is “unacceptable”.

It has close military ties with the country. Last December, for example, two Russian long-range bombers flew to Venezuela as a gesture of support for President Maduro, angering Washington, which has sought to isolate him.

The European Union has called for a political process leading to free and fair elections.

It is almost like a throw-back to the Cold War days, though with a new twist.

The Turkish government too has backed President Maduro – a move which, for some, will place Turkey into an emerging axis of more authoritarian-leaning governments.

Latin America, too, is dividing along political lines with Brazil, Colombia, Chile, Peru, Ecuador, Argentina, Paraguay and Costa Rica all backing the US move.

Bolivia’s President Evo Morales – a strong critic of Mr Trump – has attacked what he has called an imperialist assault on South America’s right to democracy and self-determination.

This traditional resort to the cry of “Yankee imperialism” may resonate less today than it once did in Latin America.

But the Venezuela crisis will not be helped if it becomes subsumed into the wider tensions between Washington and Moscow.

Still, the real political battle is on the ground in Venezuela itself.

The opposition may have the bulk of the external political support. But it is Venezuela’s military and its own people who have to determine their destiny.

This week may mark a turning point but the choice could still be between a resolution or worsening chaos.

What’s different about the protests this time?

Vanessa Buschschluter: For the first time in years, the opposition appears to be uniting around a single leader.

Juan Guaidó may be relatively new to politics but he appears to have inspired those critical of President Maduro in a way other opposition leaders before him did not.

He also appealed to those who have so far supported the government to join the protest movement.

Referring to anti-government protests which broke out in government strongholds earlier this week, he wrote: “The protests in the west of Caracas show that there’s no barrier to jump. Here we’re all in the same shoes: without electricity, without medicines, without gas and with an uncertain future. We’re all in mired in the same crisis,” he wrote on Twitter.

The protests in the poorer areas of Caracas are also a key signal that anti-government sentiment is no longer confined to the middle and upper classes.

In the past, the poorest sectors of society tended to be the staunchest supporters of the government as they were the recipients of government-funded aid programmes such as social housing.

But footage of people banging pots and shouting “Maduro go” in some of these areas would suggest that their loyalty can no longer be taken for granted.