Stocks Fall as Economy Continues to Show Signs of Strength

Two new economic reports on Thursday fanned fears that the Federal Reserve might need to go further in its aggressive fight against inflation.

Shares of Alvotech (ALVO) jumped over 23% on Thursday morning after the company announced that the FDA has granted a new Biosimilar User Fee Amendment goal date of April 13, 2023, for Alvotech’s original Biologics License Application (BLA) for AVT02 as biosimilar to Humira.

The company said FDA has completed review of Alvotech’s application of AVT02 as an interchangeable to high-concentration of Humira® and confirmed that the data provided are sufficient to support a determination of interchangeability; approval requires satisfactory outcome of upcoming facility reinspection.

Alvotech is anticipating a facility reinspection by the FDA in the first quarter of 2023.

Retail giant Target Corp (TGT) has recalled about 204,000 Pillowfort weighted blankets for children after two kids died due to asphyxiation.

According to the U.S. Consumer Product Safety Commission, a 4-year-old girl and a 6-year-old girl reportedly became entrapped in the cover of the weighted blanket and died due to asphyxia at Camp Lejeune, North Carolina in April 2022.

Target has received four reports of children becoming entrapped in these weighted blankets, including the two fatalities.

The company said a young child can become entrapped by unzipping and entering the blanket, posing a risk of death by asphyxiation. Target said it was in the process of alerting consumers and urging them to return the product for a full refund.

The retailer sold the recalled weighted blankets at its stores nationwide and online from December 2018 through September 2022 for $40.

South Korean electronics giant Samsung has recalled about 663,500 top-load washing machines in the U.S. due to risk of fire.

According to the U.S. Consumer Product Safety Commission, the washing machines can short-circuit and overheat, posing a fire hazard.

Samsung said it has received 51 reports of smoking, melting, overheating or fire involving the washers, with 10 of which resulted in property damage. Three consumers have reported injuries due to smoke inhalation.

The washing machines were sold at Best Buy, Costco, The Home Depot, Lowe’s and other appliance stores nationwide and online at Samsung.com from June 2021 through December 2022 for between $900 and $1,500.

The company has asked consumers to immediately check whether their washer’s software has been updated to prevent the hazard; and, if not, consumers should immediately stop using the washer until the software is updated.

The companies noted that Yescarta should be used only in patients who have not received prior transfusion of CAR T-cells targeted at CD19 antigen.

The approval of Yescarta for the initial treatment of R/R LBCL patients in Japan is based on clinical data, including the results of the global pivotal trial conducted by Kite (ZUMA-7).

In ZUMA-7 Study, patients with large B-cell lymphoma treated with yescarta in second-line achieved four-fold greater improvement in event-free survival of 8.3 months compared to two months for standard of care.

In ZUMA-7 study, patients treated with yescarta were 2.5 times more likely than standard of care to be alive at two years without disease progression or need for additional treatments.

Kite’s manufacturing facility in El Segundo, California, U.S., has been approved by Japanese regulatory authorities to commence manufacturing Yescarta for the Japan market in 2023.

A Qantas flight to London has had to make an emergency landing in Azerbaijan after pilots received an intermittent fault indicator in the cockpit.

The A380 was forced to land at Heydar Aliyev International Airport in Baku at about 2.15pm (EST) and was met by emergency services on arrival after making a 180-degree turn near the Georgian border. 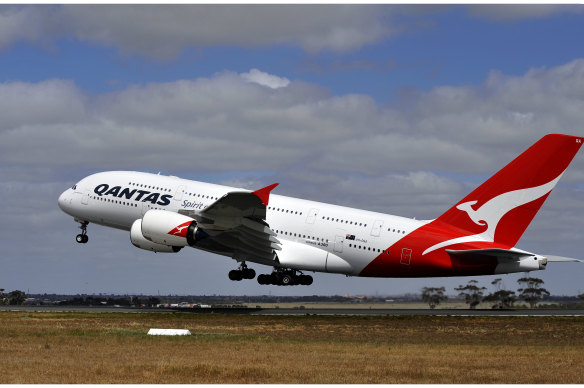 A Qantas A380 had to make an emergency landing in Baku on Friday afternoon following a fault indicator in the cockpit. Credit:Craig Abraham

“Engineers will inspect the aircraft prior to it continuing its journey,” a Qantas spokesperson said.

The wide body airbus Aircraft had been scheduled to arrive in London from Singapore at 6.15am (GMT).

Qantas has never had a fatal jet airliner accident.

The airline was forced to ground its fleet of 12 Airbus A380s at the start of the COVID-19 pandemic and has stored them in the Californian desert for the better part of two years. Qantas is now close to returning the entire fleet to service now the demand for travel has returned.