BEIRUT, Lebanon — The judge investigating last year’s huge explosion in the port of Beirut has moved to summon a range of powerful politicians and security officials for questioning as suspects, which could result in criminal charges against them related to the blast, the state-run National News Agency said Friday.

The initiatives by the judge, Tarek Bitar, are the latest in several so far unsuccessful efforts to determine the exact cause of the explosion and to hold those responsible for it accountable.

The explosion last August occurred when what remained of 2,750 tons of hazardous chemicals that had been improperly stored in the port for years suddenly combusted, sending up a pink mushroom cloud and dispatching a pressure wave that tore through Beirut, killing 200 people, injuring 6,000 and heavily damaging residential neighborhoods.

Blast victims, relatives of the dead and Western officials have called on the Lebanese authorities to investigate the blast, but those efforts have proceeded slowly amid characteristically fierce resistance from powerful politicians, leaving many Lebanese fearing that once again the powerful will escape responsibility. 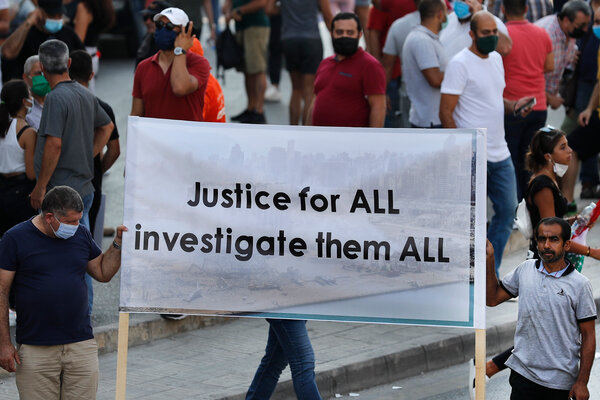 Judge Bitar is the second judge to head the investigation and is likely to face the same challenges as his predecessor: legal and public relations maneuvers by powerful politicians and other officials in Lebanon who have long operated with impunity, protected by laws that they argue shield them from prosecution.

Judge Bitar’s moves on Friday sought to sweep away these protections so he could get on with his investigation.

He set a date to question as a suspect the caretaker prime minister, Hassan Diab, and requested that Parliament lift the immunity of three current lawmakers who served as government ministers in the years surrounding the explosion: a former finance minister, Ali Hassan Khalil; a former transportation minister, Ghazi Zaiter; and a former interior minister, Nouhad Machnouk.

The judge also asked the bar associations in Beirut and Tripoli, the country’s two largest cities, to lift the immunity that is conveyed by membership of Mr. Khalil, Mr. Zaiter and a former transportation minister, Youssef Finianos.

In addition, Judge Bitar asked the caretaker interior minister for permission to question as a suspect Gen. Abbas Ibrahim, the head of Lebanon’s General Security agency and one of the country’s most powerful figures. The judge also summoned for questioning other security and military figures, including Gen. Jean Qahwaji, the former head of the Lebanese Army.

On Friday, Mohammed Fahmi, the caretaker interior minister, said he would allow the judge to question General Ibrahim, but how the other parties, especially Parliament, would respond remained unclear.

At stake, legal experts said, is a political culture that has long protected powerful officials from legal scrutiny.

“There is no shortage of allegations of corruption and human rights violations against high level officials in Lebanon, but there has been a culture of impunity that has allowed to them to escape accountability for their actions, and this is manifest in what Lebanon has become today,” said Aya Majzoub, a Lebanon researcher with Human Rights Watch.

Judge Bitar’s efforts to lift the immunity of powerful figures “is going to test the limits of this unaccountable system,” she said.

Lebanon has a weak central state that the country’s political parties often bend to their will, and Judge Bitar is likely to face fierce objections to his efforts to pursue prominent figures. He was appointed to the role by the justice minister, and his appointment was approved by the country’s Supreme Judicial Council.

His predecessor, Judge Fadi Sawan, encountered frequent attacks from powerful politicians and media organizations loyal to them who accused him of breaking Lebanese law after he sought to charge the caretaker prime minister, Mr. Diab, and three former ministers — Mr. Khalil, Mr. Zaiter and Mr. Finianos — with criminal neglect.

A Lebanese court removed him based on a request by Mr. Khalil and Mr. Zaiter, basing its decision, in part, on the argument that Judge Sawan lacked impartiality because his home had been damaged in the blast.

Nizar Saghieh, a lawyer who heads the Legal Agenda, a rights watchdog, said that Judge Bitar had followed the letter of the law to avoid possible objections from the politicians and that his investigation was “going in the right direction.”

The suspects announced on Friday span the political spectrum, which would make it harder for individual political parties to claim that they were being unfairly targeted to undermine the investigation, Mr. Saghieh said.

“This time it will be much more difficult for the political class to convince the public of the legitimacy of refusing to lift immunity,” he said.

Kayan Tleiss, whose brother was killed in the blast and who heads an association of victims’ families, said that he cried when he heard that Judge Bitar was moving ahead with an investigation that had appeared to be permanently stalled.

“There is still justice and Judge Bitar is working in the right way,” Mr. Tleiss said. “Those involved should be prosecuted and put in jail.”

Iran has not ruled out talks to end nuclear dispute, says official